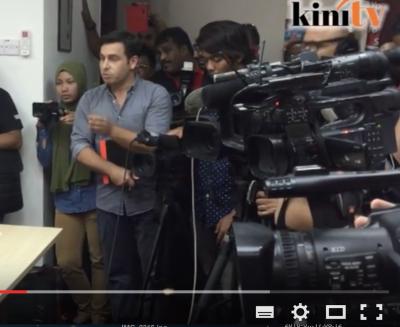 With a press conference that dissolved into chaos and racist insults, followed by the arrest of an Australian TV crew who dared asked tough questions, Malaysians have once again to thank the BN ‘NGO’ leader, Ramesh Rao, for dragging the country into a farce on the international stage this weekend.

Meanwhile, Sarawak Report has obtained copies of text messages, which show how Rao indeed offered a RM50,000 cash bribe, plus school fees, to Selvi Bala, in return for her appearance at the press conference, which had been designed to exonerate the PM and his wife, whom she has implicated in a damning court action over the cover-up of the Altantuya murder case.

Days before the press conference, according to texts sent by her mobile phone, Selvi informed a close associate that she had been approached by ‘BN’, who were offering the money:

“Sir, BN is offering me! What am I suppose to do?” Selvi texted on 10th March, “They offering my children education fees! And temporarily RM50K!  They didn’t ask anything in return”

However, when questioned further, the widow and mother of three admitted that she was indeed being required to perform a favour for the money – she needed to appear at a press conference and was expected to complain about lack of support for her children’s education.

“One of Bala friend from BN! But they asked me to give a PC but not involving either parties!…. The PC is about me telling that noone is helping me for my children education and other expenses” [sic] 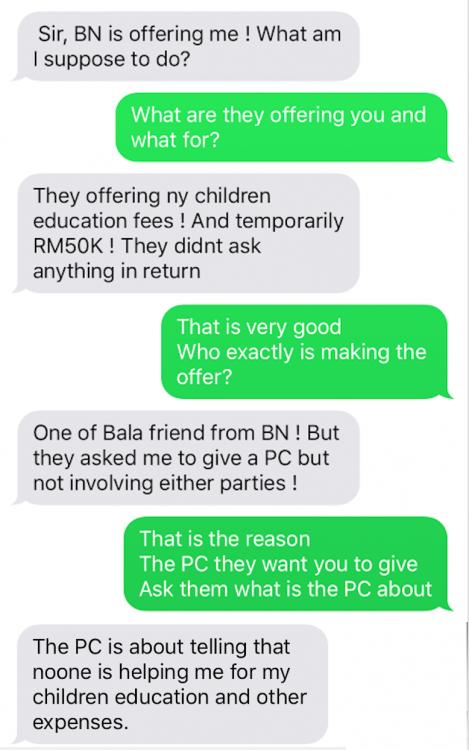 Tempted, but conflicted. Selvi makes clear she wants the money but not to change her position on the case.

As the above dialogue makes clear, Selvi had been approached by Rao and that he was offering her money in return for performing at a press conference, which he evidently planned to use for his purposes in supporting his political patron, Najib.

This was something he adamantly denied, however, when questioned by Linton Besser of ABC Australia’s Four Corners programme, who also attended the press conference after Selvi had apparently pulled out of an interview which she had originally promised to give him. 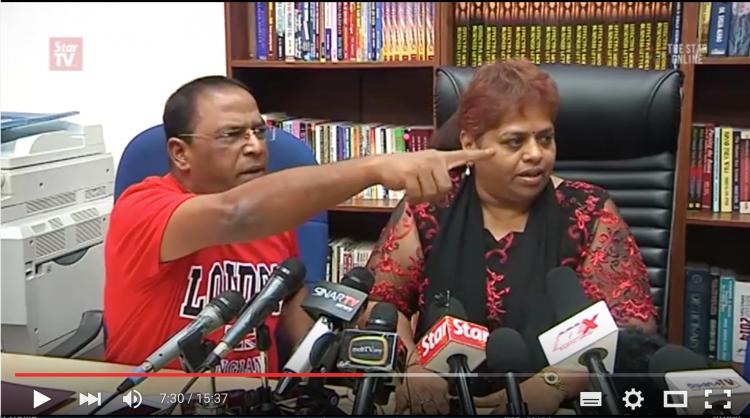 “Are you being paid by PKR?” Rao crassly asked Besser

Selvi had also failed to answer queries from her own friends and contacts in the two days preceding the press conference, as it appears that Rao had taken her into hiding.

The texts sent by Selvi and her own performance at the press conference arranged for her by Ramesh Rao make clear that she was willing to go to certain lengths to get the money being offered, but was not prepared to either retract any of the allegations made by her former husband or to drop her case implicating Najib. 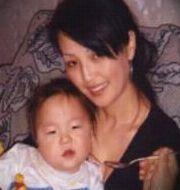 All about a crime that will not go away – why did Najib seek to pervert the course of justice regarding Altantuya’s death?

When she spoke at the conference she said that she had come “only for her children’s education”, admitting she had been offered “RM20,000″ to speak out to complain that PKR opposition politicians had not fulfilled alleged promises they had supposedly made to pay for school fees.

She was also prepared to apologise for one specific statement, which she said she had made, accusing Rosmah of having murdered her husband, who had died of a heart attack not long after returning to Malaysia to go public about the attempt to silence his original statutory declaration about the kidnap and murder of Altantuya, which he said was orchestrated by Najib, who had also been Altantuya’s lover.

Selvi said, that she had been emotional at the time of Bala’s death and had wrongly accused Rosmah of having caused his heart attack, for which she was prepared to apologise.

It was at this point that Linton Beser of ABC Four Corners asked why, therefore did the pre-prepared statement provided to reporters at the press conference indicate that she was making a far more comprehensive “apology”, which also included Najib?

Was Selvi, Besser asked, in fact also apologising to Najib and was she now saying that the allegations made by her husband were not true and if so was she dropping her court case?

She stood by every word her husband had said, Selvi repeated, implicating Najib in the cover up. She therefore had no apology for Najib and she was not dropping her case. 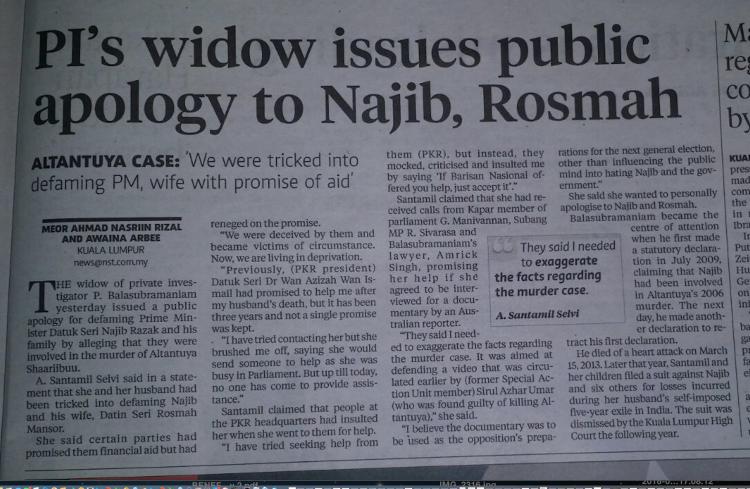 At which point, it became clear that the minders surrounding Selvi, including Ramesh Rao and his fellow BN ‘NGO’ colleagues had planned for a very different message to come out from the press conference to the one agreed by Selvi in return for the money they admitted were offering.

They started trying to intervene and to speak for Selvi instead.  Rao explained that he had asked Selvi if she knew of “any murder stuff” to do with Najib and Altantuya and that she had said no.  This, he indicated, was the basis for him telling reporters that she was also ‘apologising’ to the Prime Minister and contradicting her own law suit. 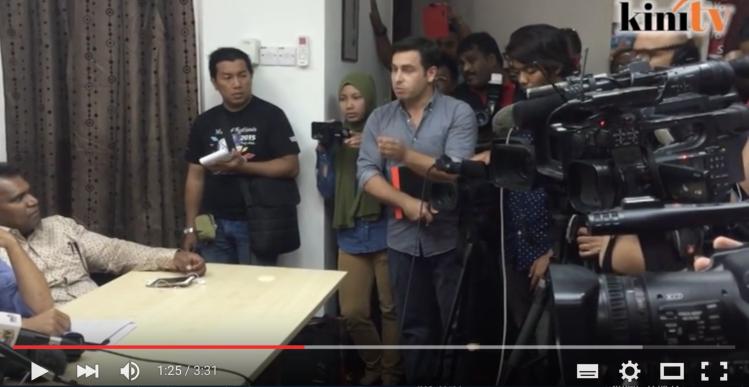 However, the Australian reporter was not prepared to accept the interventions and asked Selvi which of the “changing stories” were correct?

She insisted that she stood by her husband’s every word and was not dropping her case.

At which point Bessar told Rao that it was plain the press conference had been a “fix”, in that Selvi had agreed to do it for the money, but she was being used to give out a different public message to the one that she had apparently negotiated, which was to criticise PKR for not giving her money she had apparently expected, while sticking to her case against Najib.

It was at this point that Selvi became agitated and shouted that she had only done the press conference for the money, because she needed it for her children.

Selvi damningly shouted as she stormed out refusing to answer further questions.

Besser then interviewed Rao about his motives in bribing Selvi:

‘Would you have still provided funds had she not made that press statement?.. Why did she need to apologise the the Prime Minister in order to get funds from your NGO?

“No, people asked are you trying to bribe her to say something, I said no…

“Surely that has no credibility” protested Besser, “when for years….

“What is wrong with you white man?” Interrupted Rao “I am helping these people and you keep repeating.. I am off!”

The disastrous exchange was soon circulating online – as a text book example of how not to run a press conference.

Having reached similar disastrous blows with journalists during his previous press conferences, using Lester Melanyi, one might have though Rao would have learnt – or that his backers would have done. 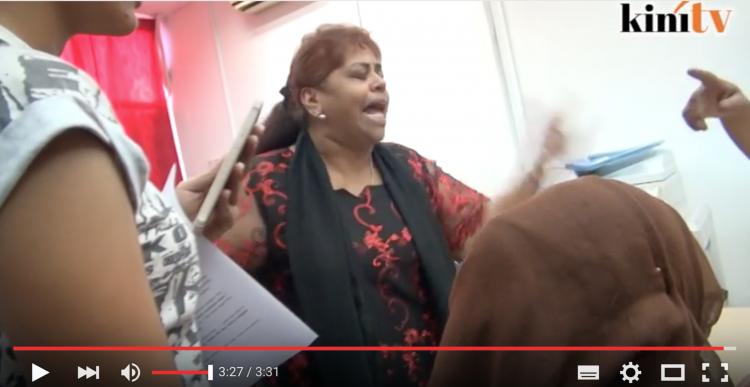 However, Rao’s semi-official status and strange financial resources (given he is a declared bankrupt) hung over this affair from start to finish. Within hours the UMNO paper New Straits Times was indeed publishing Rao’s planned version, deliberately misrepresenting Selvi’s clear statements. 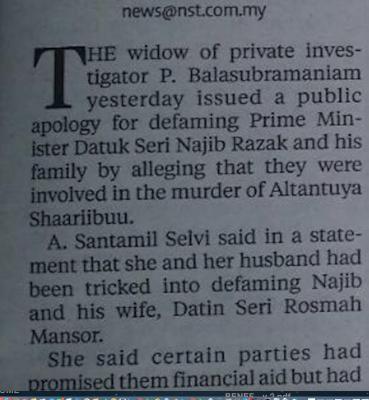 The newspaper has lied in saying that Selvi apologised to Najib and his family for alleging they were involved in the murder of Altantuya Shaariibuu – which was what she specifically refused to do at the press conference.

Moreover, Besser had queried the presence of Special Branch officers at what was supposed to be a neutral NGO event.  Other reporters asked if Rao was indeed being funded by Najib or Rosmah, which he vehemently denied, citing anonymous friends as the source of the money raised for Selvi.

Later that day, Besser and his team were arrested as they moved on to Kuching, where they reported on an event attended by Najib.

They remain incarcerated at the time of writing, presenting another textbook disaster in media management on the part of the Malaysian Government, who have thus ensured international coverage of the entire embarrassing episode exposing BN’s tactics of bribery and ‘show-confessions’. 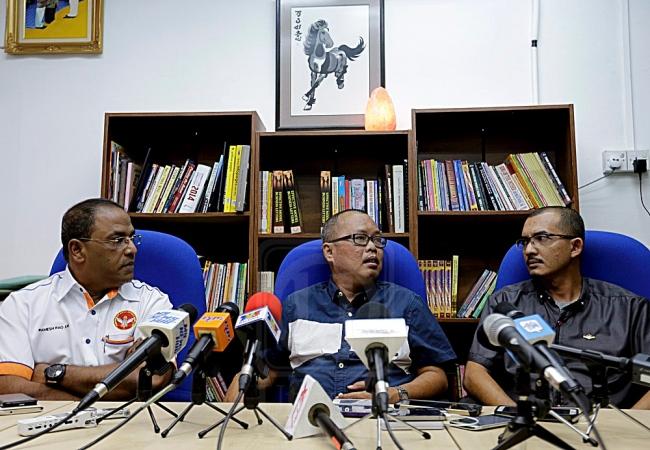 Ramesh Rao has of course got form when it comes to disastrous press conferences, which spectacularly backfire.

He rigged up a similar series of events designed to discredit Sarawak Report last year, using a former journalist Lester Melanyi.  Melanyi, who is also a bankrupt and was visibly mentally and physically ill, also admitted to journalists that he had again agreed to do the press conference in return for money. 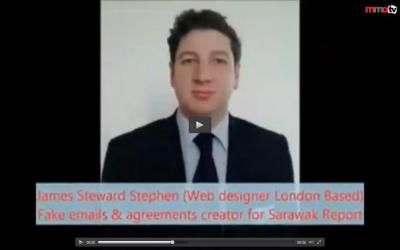 Again seated next to Rao and his colleague, Melanyi made a series of spectacular allegations claiming that Sarawak Report employed a forger and that he had even written articles for this blog, packed with deliberate lies.

The whole ridiculous set of allegations was rapidly and definitively disproved within hours by Sarawak Report, once again leaving Ramesh Rao looking foolish.

Nevertheless, the complicit connection with BN’s law enforcers was again plainly revealed, since it was this press conference and the ludicrous allegations made, which was taken as the excuse by the Malaysian Government’s MCMC to issue a permanent ban against Sarawak Report on the grounds THIS BLOG was promoting falsehoods.

We have said it once, and we repeat, that Ramesh Rao and his BN backers, who are trying to defend Najib in this way, should be ashamed of abusing vulnerable people in need of money and making them tell lies.

A mentally ill man and a desperate widow were used as as stage props to make false confessions to support Rao’s political battles and his accusations against others. 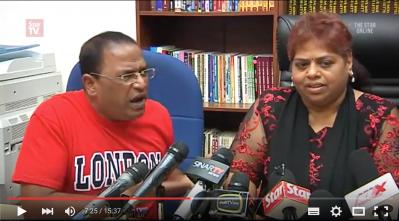 It is particularly disgusting to misrepresent for money a woman, who lost her husband because he decided to stand up for the truth against a perverted court case and was exiled without funds by the powerful figures involved.

There is no doubt that Bala’s health problems and early demise stemmed from what Najib Razak did to this family – and yet these cheerleaders have had the temerity to attempt to bribe his cash-strapped and grieving widow into an apology, rather than the other way around.

All due credit to Selvi that she, in the event, refused that apology and showed the fire and determination to continue with her case.

Let’s hope she also got that money promised by BN.