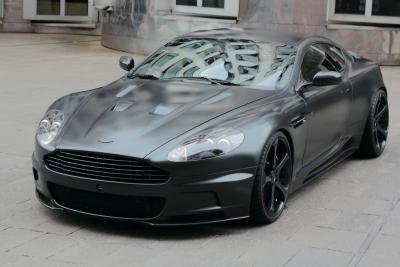 The list of major international banks, who have appeared willing to turn a blind eye to global money laundering rules on behalf of their special high-value clients, related to 1MDB and Aabar, continues to grow.

So does the list of apparent fall guys, as some senior heads have already rolled.

Yet, glaring questions remain to be answered by the banks themselves and of the remaining key executives still in post.  Amongst these has to be AmBank’s long-standing Chief Financial Officer, also on secondment from its major shareholder, Australia’s ANZ bank, Mandy Simpson.

How was it that Simpson felt able to preside over a series of multi-billion ringgit accounts, which were built up by a sitting Prime Minister during his period of office?

How did she respond to the evidence that these accounts, belonging to a politically exposed person, were receiving millions and millions of ringgit from a public company, which had been funded by a loan from a public servants’ pension fund?

And, when several equally politically exposed “recipients” were in turn given millions of dollars out of these accounts belonging to the said Prime Minister….. well how did she feel about that? 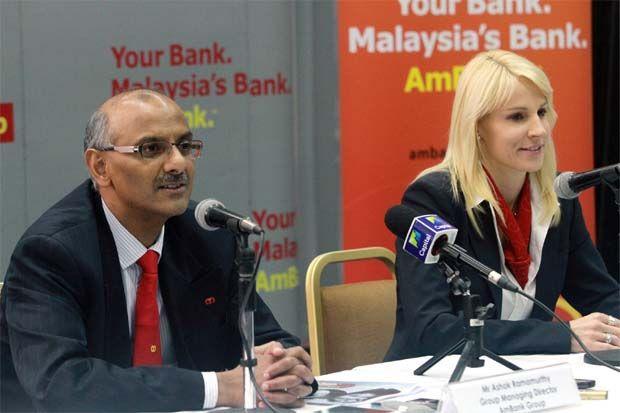 Ashok Ramamurthy and his CFO Mandy Simpson, both seconded to AmBank from Australia’s ANZ Bank

Moreover, it was Mandy also, of course, who presided over the receipt of over a billion dollars from companies such as Blackstone Asia Real Estate Partners (BVI), which has been established as belonging to Jho Low, and Tanore Finance Corporation (BVI) to the Prime Minister. 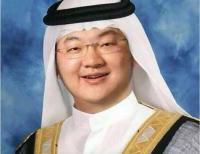 A reference letter from Blackstone was signed from the ‘sheikh’, however the shareholder was Jho Low

What KYC (Know Your Customer) due diligence did she perform over such payments, because she was legally bound to do so?

In fact, as Sarawak Report as already revealed, AmBank received a series of letters to back up all of these mystery payments – which were all exactly the same and sent by the same person, described as ‘His Highness Saud Abdulaziz Majid al-Saud‘.

No one has established that there is any person of sufficient means of this name nor that there could have been any legitimate reason for sending Najib such a sum of money.  It has been established however, that the misleadingly named Blackstone Asia Real Estate Partners (BVI) belonged to Najib’s proxy at 1MDB, Jho Low.

How did Mandy Okay this to her bosses and to Malaysia’s own Central Bank?

Other banks who have been recorded as having helped transfer vast sums in the web of 1MDB/ Aabar related companies are Coutts, JP Morgan, BSI, Standard Chartered, Deutsche Bank and Falcon Bank.

Thus, it has become increasingly clear that while ordinary customers of such banks have become wearily used to being questioned and harassed over currency transfers, in the name of anti-money laundering regulations, those politically connected persons, who like to describe themselves as VVIPs are smoothly assisted by the ‘wealth management’ and ‘private investment’ arms of the very same institutions.

Yet, it is these very ‘VVIPs’ who are a major reason for these regulations in the first place.  Because, people who are not fit for public office, very often do take advantage of their opportunity to betray the public trust and need to be especially monitored by banks, according to international anti-money laundering legislation.

Evidence has mounted that several banks have, instead of applying the law to these ‘Red Alert’ accounts belonging to ‘Politically Exposed Persons”, as they are bound to do, have decided that such persons can be considered to be above the law, thanks to weak governance in countries such as Malaysia.  These banks decided it was safe to exempt these VVC(corrupt)Ps.

It is therefore paramount, now that the cat is out of the bag, that the global regulators are seen to act to restore vital public trust in our banking systems, rather than to allow the erosion to continue.

The latest bank caught up in the web with probable questions to answer is the New York Bank Mellon.  It has emerged that the London branch of this major institution held accounts for three of the major investment arms of 1MDB: 1MDB GIL, 1MDB Energy and 1MDB Energy Langat. 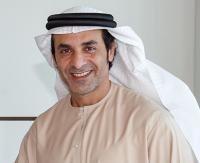 The sacked former boss of Aabar, Khadem Al Qubaisi has presided over even more missing billions than his nightclub pal Jho Low

Given that so many hundreds of millions have leaked from these three investment bodies Mellon Bank will without doubt be in a position to help the regulators tracing those missing millions.

Sarawak Report has also obtained documentation that shows that Mellon Bank was caught up as the clearing institution used by the now sacked Marc Ambroisien, of Banque Privee Edmond de Rothschild Luxembourg, to process HALF A BILLION DOLLARS of payments to his premier client, the former Aabar chief, Khadem Al Qubaisi.

This half billion dollars was sent to Khadem by none other than the same Blackstone Asia Real Estate Partners Limited (BVI) owned by Jho Low in 2012, which was the same year as those dodgy ‘power purchase deals’ between 1MDB Energy and Aabar.

Did any of these three banks fulfil their KYC due diligence in this matter in line with the clear duty upon all banks to notify a ‘Red Alert’ to their regulators over any suspicious transactions?

In which case, how come this money was transferred from one politically exposed person to another, both of whom were related to the same 1MDB/ Aabar deals, involving vast sums of public money linked to their respective public positions? 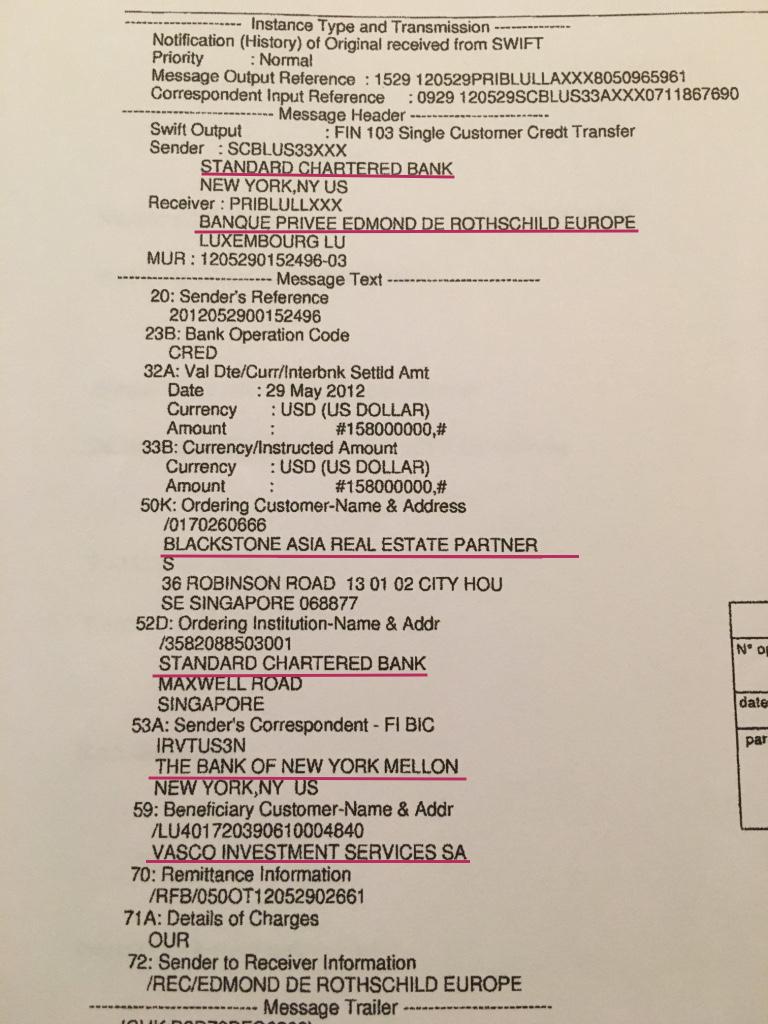 As one money laundering expert has explained to Sarawak Report, the duty of the banks in transactions such as these are clear:

“The US clearing bank and US bank are bound to know the customer in a transaction. The transaction [above] is obviously non-typical amounts. Stakeholders in such a transaction have to take a special diligence not only on the basic customer identification, but on more enhanced due diligence.”

There is no doubt about the transgressions on the part of the top man at Edmond de Rothschild, which is clearly why Mr Ambroisien has now been removed from his top position at the bank.

So, what action has been taken by regulators against the bank, which has continued to insist in interviews that it has never failed in its due diligence obligations and has no questions to answer with respect to Mr Ambroisien?

Should it be considered normal at Edmond de Rothschild, for example, that their top executive received a Euro 250,000 Aston Martin DBS (RM1.1 million) provided by his wealthy client?  This is indeed what Al Qubaisi arranged as a little present to Ambriosien back in the day when he was working for BPERE: 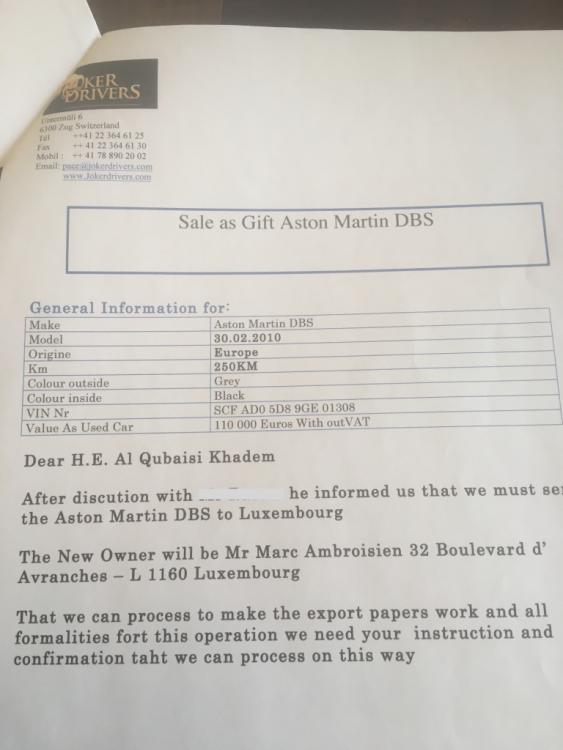 Furthermore, recordings, now in the hands of journalists, of Mr Ambroisien discussing his accounts with Khadem Al Qubaisi, make clear that this top private banker was well aware that he was breaking all the rules in transferring these vast sums.

Referring to a deal in 2014 between Khadem and his 1MDB contact Jho Low to buy the company Coastal Energy using money from Aabar and ‘SRC Global’ (highlighted by Sarawak Report two years ago as suspicious) Ambroisien stated clearly that related backhander profits to Khadem could never have been processed, for example, through HSBC.

All of the above, perhaps explains the gift of the Aston Martin to Mr Abroisien, but it does not explain the claims of his bank made to journalists that there have been no improprieties.

Malaysia and the world are now waiting for global regulators to act in the face of the mounds of damning evidence over the 1MDB/ Aabar scandal.  If they do not, then the story becomes immediately far more serious and politically charged.