Trust Us - New Zealand Can Hide Your Money!

A trust is supposed to be an instrument by which money is placed with a third party, who manages it on behalf of the beneficiary, who is thereby removed from direct control over it.

An example of a legitimate purpose for such a trust might be Donald Trump, who is being pressured to put his money in one, so that he cannot be tempted by his vested interests over policy making.

However, rich men like to have control over their money and the vast majority of trusts are actually tax-evading shams, as anyone in the financial world knows full well.

Take an off-shore company and combine it with a trust; pay a couple of different firms of lawyers and accountants to manage your affairs (who are always deliberately a little confused about the exact role of the other) and bingo! you have the core ingredients for hiding your money or your property from taxmen and regulators across the world. 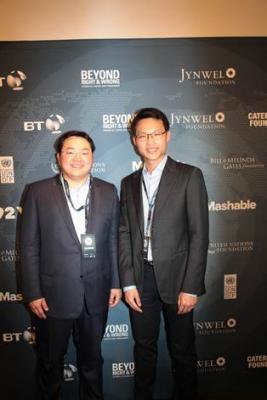 From this structure certain patterns have emerged. In particular, one of the most popular places to set up these trusts just happens to be New Zealand. Time and again, investigators like Sarawak Report find themselves tracing large businesses linked to, for example, Malaysian politicians like Taib Mahmud, only to find the money disappearing behind New Zealand trusts.

This was thrown into glaring perspective by the Panama Papers, which revealed how shadowy businessmen the world over were all choosing distant New Zealand to park their money. One of these was Jho Low’s Dad, of course, Larry Low and one assumes such people are neither attracted by the weather nor the convenience of New Zealand’s location.

The revelations prompted political pressure on the New Zealand government, which instituted an enquiry that many have decried as a whitewash, led by a gentleman named John Shewan, who was himself a key representative of the New Zealand tax avoidance industry.

Shewan announced that he could find no actual evidence that there had been widespread abuse of New Zealand’s tax regime. However to give him his due, his report did admit to major flaws that could be reasonably open to such abuse:

In his report… Shewan said the current rules were inadequate and “not fit for purpose” to preserve New Zealand’s reputation as a country that co-operates with others to counter “money laundering and aggressive tax practices”.

In theory the current rules should be sufficient to deter tax abuse and existing anti-money laundering rules should ensure funds held are from legitimate sources.

“However, under current law and enforcement practices the risk of detection by authorities is low… Strengthened disclosure requirements should act as a deterrent to offshore parties looking to use New Zealand foreign trusts for illicit purposes.”[Stuff NZ]

Shewan’s proposals for various reforms are now going through parliament. However, critics are saying they are far too limited to deal with the problem and that he has suppressed glaring evidence about the wholescale abuse of New Zealand trusts.

How Larry Low wants back in charge of his trust now the law has caught up with him! 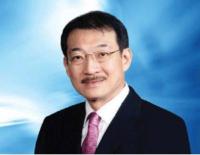 One example of the blatant manner in which trusts are used as a disguise rather than a genuine device comes up in court on Friday in New Zealand, where Malaysia’s now notorious Low family are doing their best to prevent a sequestration of their stolen assets from 1MDB by the United States authorities.

However, when the US authorities struck they were appalled when these professional trustees immediately bottled and failed to defend the case.

So, the Lows want to change the trustees to someone who will fight a case in the US courts to try and claim the assets (bought with money that the FBI has demonstrated was stolen from 1MDB) are rightfully theirs. Why not? The Lows have nothing to lose and they will only be wasting what is left of 1MDB’s money by fighting the case.

But, it does of course completely undermine the facade that by putting money in a trust these businessmen are genuinely expecting to surrender up control over how it is managed!

The purpose is corruption – Vasco Trust 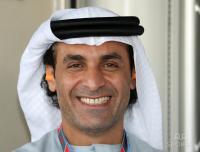 Since finance expert Mr John Shewan couldn’t find a single example of a corrupt use of a New Zealand trust fund, Sarawak Report would like to humbly offer him the details of how one such trust was deliberately set up by financial professionals in Europe to facilitate both the hiding of stolen money (again from 1MDB) and the avoidance of tax in the United States by the Emirati businessman Khadem Al Qubaisi, who is now in jail.

Perhaps this might help spell out for him and New Zealand legislators the extent of the global problem, which is caused by the deliberately lax laws that have become such a nice little money-spinner for a section of their finance industry?

Khadem, as readers of SR will be aware, had stolen a cool half billion US dollars from 1MDB, in return for helping Jho Low and his boss the Prime Minister squirrel out a further $7 billion from the Malaysian ‘development fund’.

He had managed to place this in his Edmond de Rothschild Luxembourg bank account in the name of Vasco Trust, thanks to the willing blind eye of its then CEO (now sacked), a former French tax inspector named Marc Ambroisien.

Ambroisien also set himself up as Director of a number of private companies in France and off-shore, which managed the various investments and properties into which KAQ as Al Qubaisi is known, ploughed that stolen money.

“These whole legal entities have been incorporated and put at entire disposal of Mf Khadem Al Qubaisi for dedicated investments or holding private assets, according to our global Family Office mandate. In that way Mr Khadem Al Qubaisi is the sole ultimate beneficial owner of the global structure.”

So, what was the point of it all being hidden in a trust, since KAQ was plainly managing his  own investments? 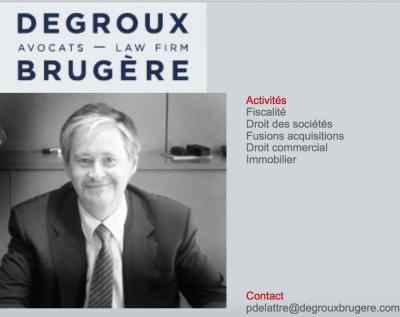 Trust was constructed by a helpful French tax lawyer.. who recommended New Zealand as just the place of a trust to hold an apartment in …. New York!

The answer can be seen in the detailed arrangements that Mr Ambroisien and his colleagues at Rothschild Bank put into place for Khadem to help him purchase one of the most expensive penthouse properties in New York.

KAQ had used his side-kick in the US, nightclub manager Neil Moffitt, to pretend to be the owner of the flat, however he also wanted to avoid the tax authorities in the United States.

Edmond de Rothschild managed the situation by introducing KAQ to French tax experts at the law firm Degroux-Brugere. Their specialist, one Philippe Delattre, provided a written presentation on how he thought the property could be hidden using a combination of a United States and a New Zealand trust and a shadowy Delaware corporation in the United States (Delaware has brought the off-shore industry effectively on-shore in the US). 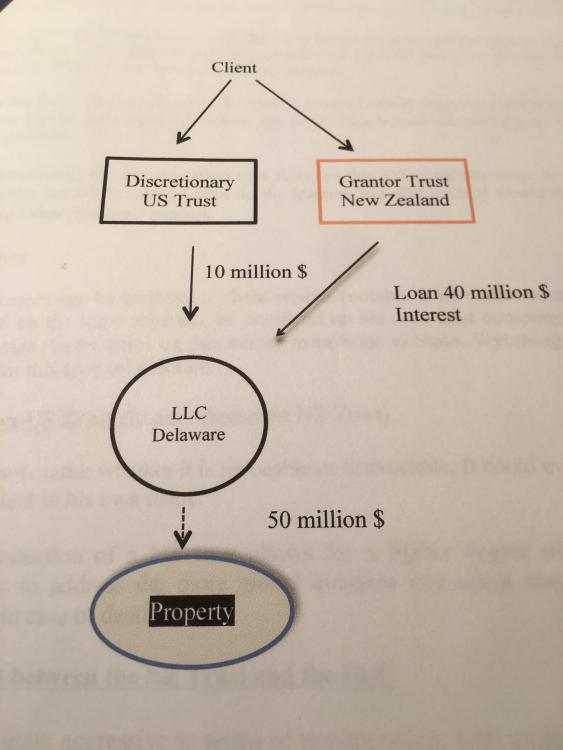 First there would be the US Trust, Delattre explained:

“This is a discretionary trust for the benefit of the client and his family. The trustee must be a US tax person (citizen or resident) and if there are also an Investment Adviser and a protector, they must also be a US persons (sic).

It is to be noted that because of the loan, the value of the US trust remains relatively limited.

In the event of a sale of the investment and because of the mechanism of the loan, the main part of the invested capital and a substantial part of the gain could be remitted abroad (the non-discretionary NZ trust)….. 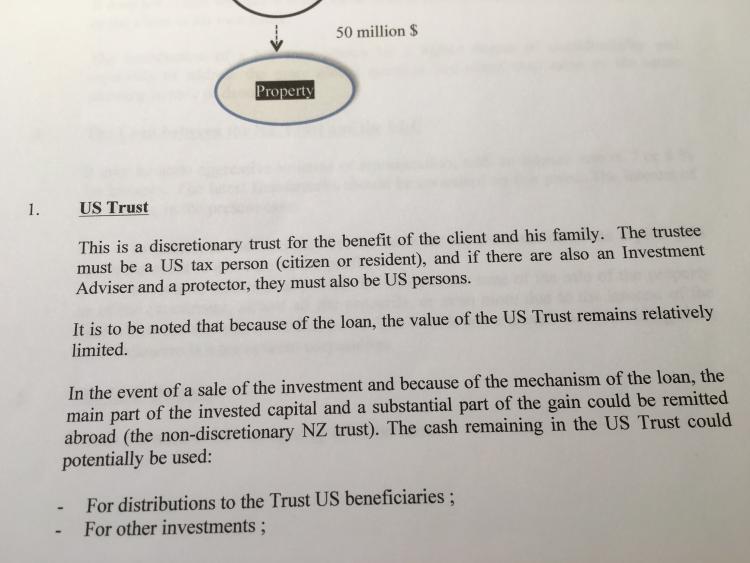 Then there would be a non-US trust, explains Delattre to hold the bulk of the money. He recommended a New Zealand trust:

“The introduction of a NZ trust allows for a higher degree of confidentialiy ….

The Loan between the NZ Trust and the LLC
It may be quite aggressive in terms of remuneration, with an interest rate of 7 or 8% for instance. …

“… to remove automatically from the USA at the time of the sale of the property or the investment, almost all of the proceeds, or even more due to the interest of the loan, which are capitalised at that point. The loan is not exposed to withholding since LLC Delaware is a transparent corporation.” 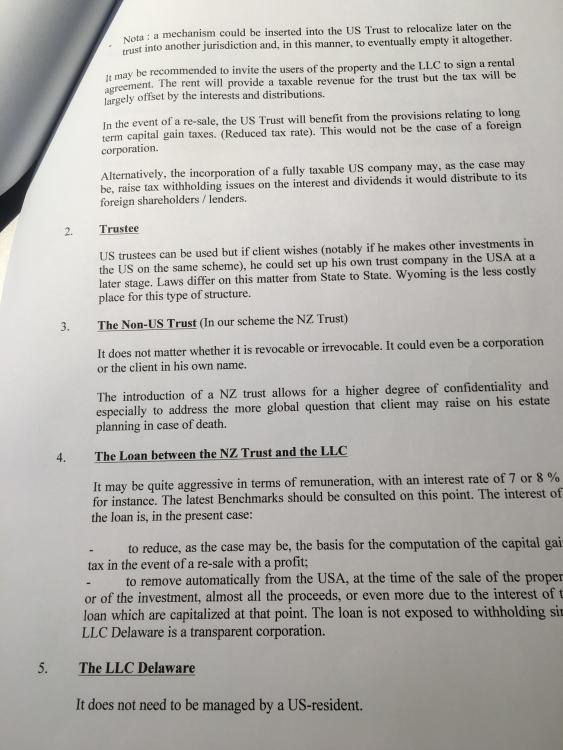 The purpose of these mechanisms – a secrative Delaware company, a US Trust and then an NZ Trust is clear from the above. It was to hide the ownership of the cash and pretend that the buyer in New York was borrowing the money, instead of paying himself…. all in order also to avoid tax.

The structure was a planned deception, provided by tax lawyers whose business is to assist the generally criminal classes of super-rich to conceal their wealth and to avoid paying the tiresome taxes that less well-off people have to pay.

By pretending that there is seriously any other substantial reason the tens and tens of thousands of wealthy people across the world set up New Zealand trusts the country’s finance industry is participating in the fraud.