So Who Is Supporting 'Opposition" PAS Leader, Hadi Awang, In His Suit Against SR? 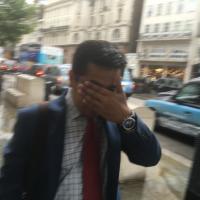 Anxious not to be identified? High Commission official outside Hadi’s High Court hearing

Britain’s most aggressive libel lawyers do not come cheap.  However, PAS President Hadi Awang has hired solicitors Carter Ruck (at over £500/RM3,000 per hour) over the past several months plus a top barrister to attend each of their court appearances, even for the preliminary case management stages.

A reasonable assessment of the costs incurred so far would be around £100,000/ RM600,000 , even before the trial itself has got going.

So, is Hadi Awang footing this humungous bill himself, lawyers for Sarawak Report have repeatedly asked?

However, Carter Ruck has refused to answer this question on behalf of their client, who has himself embarked on a public campaign to raise money for the court case from members of the congregations at their mosques.

Meanwhile, PAS spokesmen have explained that the party itself cannot pay, and claimed that it cannot even afford its electricity bills.  Hadi has his MP’s salary (admitedly recently inflated by Najib to RM16,000/ £2,800 per month) but on the face of it that would not appear to be up to servicing the voracious invoices of Carter Ruck.

The PAS fundraising campaign did announce in March that it had raised a relatively megre £13,000 towards the case, which its spokesman has acknowledged could cost millions.  Since that time there have been no further public announcements about money raised to bridge the gap, although the case has continued unabated.

So, has some entity stepped in to assist Hadi Awang in funding the case?

Certainly, PAS is refuting Sarawak Report’s earlier observation (the cause of all their anger) that many in Malaysia believe that like other parties allied to UMNO/BN it has started to receive support from the PM – support that spokesmen from the MIC and others have openly acknowledged on the grounds they see nothing wrong with taking cheques signed by Najib to support their political campaigns.

So, if this is not the case, we ask why it is that the party’s UK legal team are refusing to acknowledge how and by whom they are being paid?

Under such circumstances Sarawak Report was surprised to see that no fewer than six senior Malaysian High Commission officials saw fit to take a day out of their busy diplomatic schedules in order to attend Hadi’s case management hearing against Sarawak Report in the High Court in London, today 2nd August. They listened carefully and took notes.

On the other hand, there were no other Malaysian figures attending the court, for example to represent PAS or Hadi. 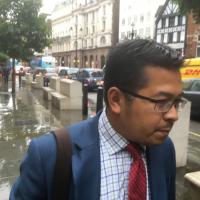 So, what is the interest of the Malaysian Government in a libel suit pressed by an ‘opposition politician’ against a lone campaigning journalist and why have they invested so much time and deployment of their staff?

Sarawak Report was able to photograph three of the six High Commission staff, who appeared to be familiar with the plaintiff’s legal team and had clearly been briefed fully on the session – where, what time etc.

These Malaysian government representatives were not happy to be photographed, in fact they complained and one covered his face in an attempt to shield his identity.

We later revealed the man who tried to hide his face as Mr Mohd Hadrizammi Mustafa (above) who is listed at the High Commission as a ‘Political Counsellor’ under a department entitled ‘Political and Security’. Sources close to the High Commission have told Sarawak Report that he is believed to have an intelligence role. 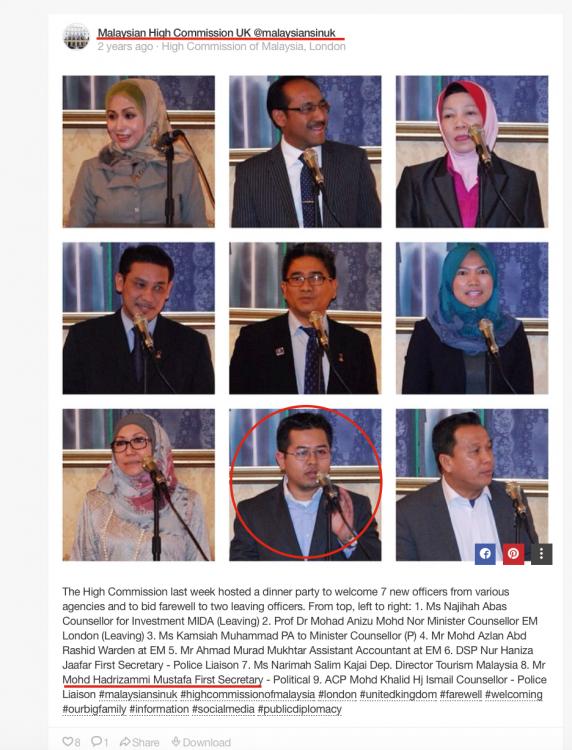 According to the High Commission’s own instagram (above) Hadrizammi arrived two years ago in the capacity of First Secretary. 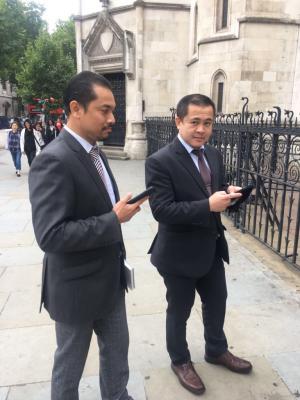 Caught outside the court

Two other staff members photographed at the court were also displeased to be identified and asked the photographer to stop.

On the right is Mr Jesse Quiban, Second Secretary of Bi-lateral Affairs, also in the ‘Political and Security’ division of the High Commission.

Sources say that Mr Quiban, who is from Sabah, is known as being Head of Chancery.

Social media postings make clear that both men are currently employed in the London High Commission and Mr Quiban has come from key official roles earlier in KL. 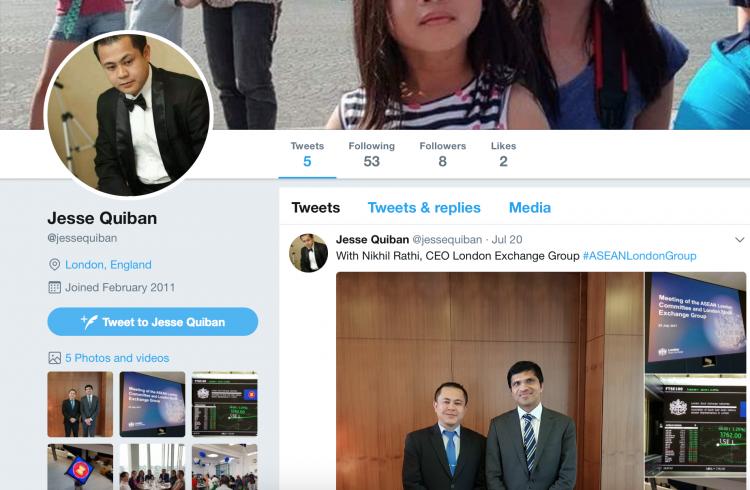 Today Hadi’s UK legal team argued (successfully) that Sarawak Report should be made to go and chase its own costs in KL, should it win, on the basis that it would have no problem whatsoever in extracting its costs from Hadi through the Malaysian courts. 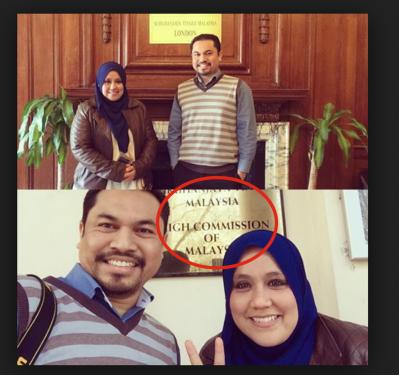 This is because, Carter Ruck argued, there is no evidence at all of political interference in court proceedings in Malaysia and no evidence of any risk of political pressure being brought to bear on the country’s “objective and independent” judiciary.

Carter Ruck also said that there is no evidence of corruption in high places in Malaysia, so Sarawak Report would have no problems executing a British court order against Hadi through the KL courts if it were to win against Hadi’s libel action, which has been stated as representing PAS.

On the other hand, Carter Ruck generously advised in court that Sarawak Report might wish to drop its defences referring to corruption and just stick to its other defences (if it was really so very worried about the effects of annoying Najib). 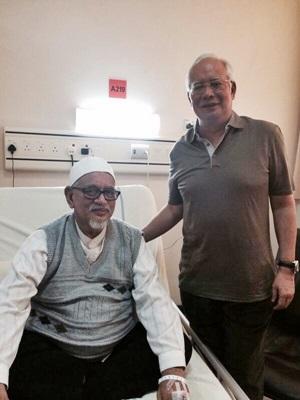 There is, in fact, what might be seen as a rather lethal “Public Policy” exemption in the Reciprocal Act between the UK and Malaysia of 1958 (to allow enforcement of court decisions) which allows Malaysia to reject enforcement of orders that conflict with Malaysia’s own ‘Public Policy’.

However, Hadi’s lawyers have reassured the UK’s case managers that in no way would a ruling that happened to besmirch the reputation of the Prime Minister and find him culpable of corruption fail to be enforced by a Malaysian court on such a pretext against a website which has been banned for “spreading false news”.

No matter that this “false news” over 1MDB has now been upheld by the United States Dept of Justice, the Singapore Courts and the Swiss Attorney General. No matter that the French court has just identified the Malaysian Prime Minister as a man who took a massive bribe from their defence contractors, now indicted (along with Najib’s henchman Razak Baginda).

What a relief!  Anyone would have thought that the emergency debates later this very week called by Malaysia’s Bar Council, deploring political interference with the judiciary might have amounted for something, but apparently not.

This being the case, surely answers should be expected as to why all these representatives from the ‘Political and Security’ division of the High Commission were there in court today, following the case management of this ‘non-politically interfered with case’ and who is paying for Hadi’s lawyers?

In the words of one observer of the case said today “It appears that this is not a case being brought Hadi but by the Malaysian Government”. If that is not true, who is supporting Hadi?. 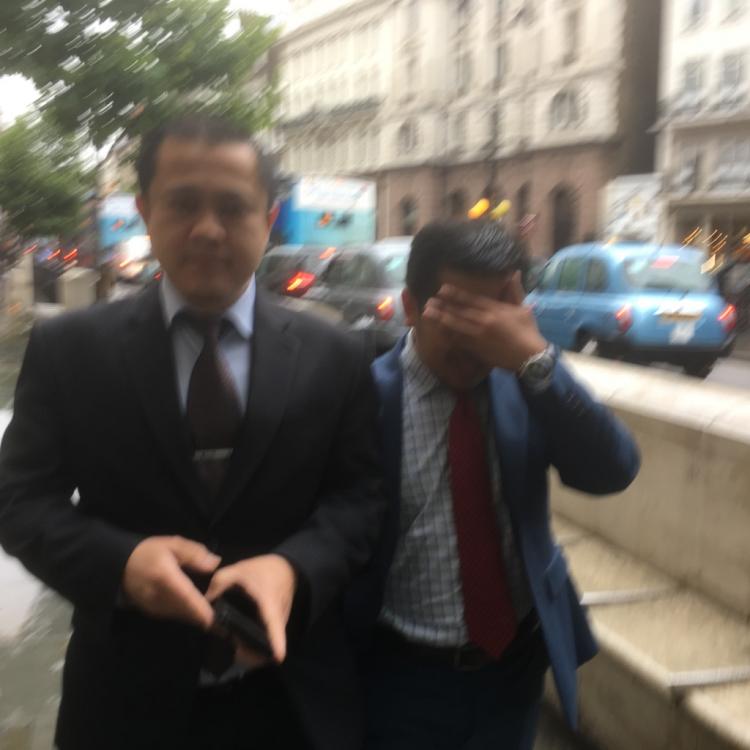