When news of the IPIC settlement broke in April wise heads had predicted Najib would run for an election in July…. before he had to show the colour of 1MDB’s money on 31st of that month.  After that month, things could only get worse.

However, Najib failed to bite the bullet.  Soundings from polling didn’t give him sufficient confidence, say sources – even before that momentous July 14th reconciliation between Mahathir and his imprisoned former deputy, Anwar Ibrahim launched the deadly coalition that now challenges BN.

So, as predicted, at midday Tuesday (KL time) the cloak of deception finally fell from the shoulders of the Minister of Finance leaving him bare for all to see. No payment.

The much ridiculed promise that the “units” redeemed by 1MDB from the PetroSaudi deal via its notorious Cayman Island ‘investment portfolio’ could be ‘cashed in’ to pay for the total of $628 million owing to IPIC by that deadline, proved as hollow as everyone sensible had long since pointed out. It didn’t happen.

DAP Finance Spokesman, Tony Pua had fumed just last week that his highly pressing and pertinent parliamentary question to that effect had been rejected by the Speaker:

This was just days before these “units” were due to form the backbone of Malaysia’s fulfilment of its obligations over the IPIC debt. Pua has now been vindicated in his concern and over the pressing validity of the question, but no one will want to celebrate that fact, because of the disaster that it spells.

Likewise, 1MDB’s lame admission today that it is still having a bit of difficulty realising the huge sum out of worthless paper IOUs (once held by a bank that has now been shut down) confirms the gloom, because it proves that these useless fraudsters are still clinging on to the same old nonsense about ‘rationalisation programmes’ and money in the bank: 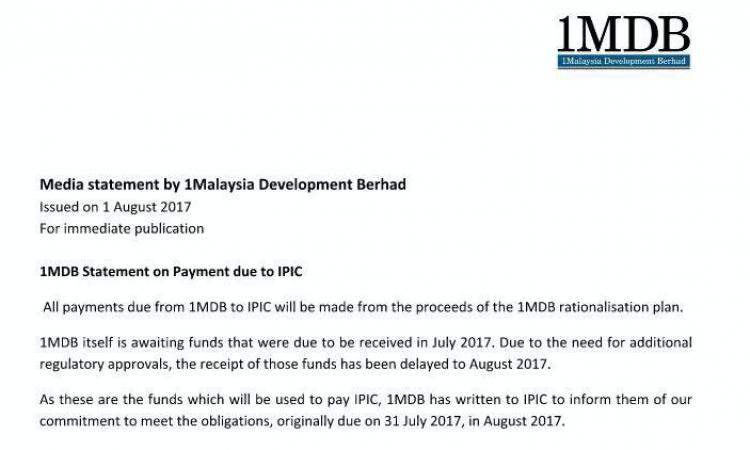 Just give us a wee bit more time Sirs!

1MDB/Minister of Finance are still relying on cashing in their fictional assets.  They have a five day grace period that ends next Monday. Then what?

On the other hand, if there is anyone out there who fancies spending $620 million on some scruffy notes (stored we know not where) this is your chance.

Bearing, in mind that the DOJ has now explained that these “units” were secured against no more than a couple of delapidated drill ships worth little more than scrap, which have languished idle off the coast of Venezuela locked in a dispute with that country for several months, it seems as unlikely as a ‘Saudi Royal’ willing to help Najib with his $681 million ‘election expenses’.

The real concern here for Najib and Malaysia is that this failure come up with any cash has not only proved what we all knew about 1MDB (that it’s broke), but it has proved what those in the know already knew about its guarantor, Malaysia’s Ministry of Finance.  Najib hasn’t even been able to find the money to PRETEND that the debt was paid by 1MDB.

Najib now has five days to twist arms in the Treasury, Petronas or somewhere else to cough this huge sum up. Resources abroad have been frozen across the globe, thanks to being mired in Malaysia’s web of suspicious transactions.  As one market watcher has remarked to Sarawak Report:

If that really is the case, then, as predicted by those who expected Najib to go to the polls in July, the consequences over the next days will be disastrous.  Malaysia will go into default and the ringgit will start to free-fall.

Jho Low’s ‘Captain of the High Seas’ will be shown up for steering his country straight towards a whirlpool, simply because he wasn’t willing to admit that he had been heading in the wrong direction and stolen a lot of money.

Everyone must now hope and pray that Najib can somehow employ his vast power and resources to thow an anchor in somewhere, somehow.  However, even if he can perform the last minute rescue, the situation he has confronted his country with this week has been totally unforgiveable: both humiliating and a shocking act of risk-taking.

Crumbling Alliances – has China pulled out?

There is more dangerous news rumbling that signals the collapse of yet another pillar of Najib’s escape plan built up together with Jho Low over the past critical months.  Sarawak Report has heard that China’s President has pulled out of the earlier agreement to visit Malaysia in September, planned by Najib to pave the way for an October election.

If so, it would appear that the Malaysian PM and his wide-boy fixer have just become too much a liability, damaged goods and on the wrong side of an election in a country that looks set to turf them out!

There is another deal that has turned out not to be so much of a deal after all, insiders have  also revealed to Sarawak Report.  The Geely bid for Proton appears to have spluttered to a halt, certainly progress is down to one cylinder – no one from the Chinese company has been seen around for a considerable time.

Has Najib decided that if he is to suffer for his sins he will at least make sure that his country suffers worse?