Every time that Najib Razak has abused his powers to try and skew this election further in his own favour, he has revealed how lacking in confidence he is that he can win a fair election and also what he feels are his weakest points.

The latest jaw-dropping move from the Election Commission has been to draw up last minute changes to the rules, even after the election was called, that prevents the opposition’s popular prime ministerial candidates from election posters.  No reason given for this change of rules.

So, now we know that Najib fears that his face cannot compete with the famous figures of the opposition. Therefore, he has organised for them to be banned from the public eye. 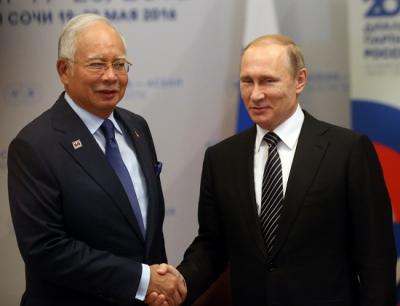 Najib, with the sort of leader he plainly wants to become

From henceforth, only Najib is to be allowed to appear, grinning like some Central Asian dictator from the billboards.

It tells everyone two key things: firstly, that Najib is terrified that he cannot compete in the popularity stakes, so feels that if he can at least blank out the other figures people might be confused or less inspired to vote for the opposition.

Secondly, people now know that Najib, were he to win, will waste no time at all in making himself into a replica of the sort of dictators, whose tactics he has been increasingly employing over the past several months.  There will be a ban on posters and statues featuring anyone but the ‘Great Dear Leader Najib’.

Wait for the law that abolishes the next election until further notice. After all, this man is far too insecure (given his long list of crimes) to ever put himself back in a position where power could be transferred.

It has yet to be determined to what extent this and the other outrageous abuses of recent weeks will backfire, as people inevitably lose respect over such behaviour. Or whether Najib can combine the cheating and bullying with the handing round of the people’s own stolen money to bulldoze through his desperate determination not to lose.

Najib has been able to fix things all his life, thanks to the positions he inherited owing to his father and thanks to UMNO.  He has got out of numerous scrapes, simply by using his connections, abusing his positions and dishing out cash (stolen from the public).

Therefore, since the thought of Mahathir and Anwar’s famous faces challenging him from the billboards has plainly keept him awake at night, his reaction is naturally to order for the problem to be sorted out.

Does he think voters will be impressed by his obvious fear of a fair fight?  Time will soon tell.