The list of outrageous, arbitrary last-minute rules, designed to nobble the opposition has been growing by the hour.

Having banned all pictures of the opposition leaders from being shown at this election, Najib is now moving all out to prevent key figures like Dr Mahathir from campaiging.  The attempt comes in a sudden police order that only candidates will be allowed to hold ceramah’s within their own consituencies and they will need to give the police ten days notice.

Do the maths. There are only 11 days of campaigning after candidates are announced.  If outside speakers are not allowed to hold rallies, then presumably this will be used by police officers under Najib’s orders to shut down other rallies.

The man is plainly desperate.

Next take a look at the evolving landscape on whether or not there will be external observers in these elections, something that has been called for for months and years and that needed to have been organised well over six months before any likely election was to take place.

Malaysia has been resisting observers.  However, chastened by admonishments by other countries, including the UK as reported by this outlet last week, the Foreign Minister has suddenly been bobbing up with announcements to say he has made offers for observers after all.

Heavily critical of Sarawak Report for ‘misleading’ the public on a series of news developments (all of which he at the same time admitted were true) Anifah Aman then announced that the Election Commission has just issued offers to 14 countries to send observers.

Staggeringly, the vast majority of those countries are classed as Authoritarian or Hybrid (pretty much authoritarian) regimes on the Economist Democracy Index and other similar respected lists.  They include Muslim-bashing Myanmar, Azerbaijan, the Republic of Kyrgyzstan, Maldives, Uzbekistan, Cambodia, Indonesia and Thailand!

The Electoral Commission has followed up that bombshell by at the same time informing Malaysia’s own respected Human Rights Commission, SUHAKAM, that (unlike the representatives from these authoritarian and corrupted countries) its own personnel would be banned from the polling booths.

Yet, attempts are clearly being made to attempt to deceive Malaysians that respected observers have also been invited to join the monitoring of this controversial election.

Also tagged onto the list provided by the Foreign Minister are a series of what to the untrained eye appear to be the sorts of countries Malaysians might welcome as fellow democracies, who might ensure fair play or at least a fair analysis of events.  Australia, Canada and India have also been invited – as well as an organisation called the ‘Malaysian Commonwealth Studies Centre (MCSC) of Trinity College, Cambridge’.

However, as Anifah Aman plainly knows, but presumably hopes most Malaysians do not, Australia, Canada and India, being members of the Commonwealth do not in fact directly send Election Observers, but perform this function through the Commonwealth as a whole.  So, even if they wanted to these countries are not in a position to respond to the Election Commission’s last minute and impractical request.

Glaringly, the Commonwealth Secretariat, which runs the Commonwealth Observers Group that could organise monitoring on behalf of these countries for Malaysia, is not included in the list of entities that Anifah Aman published on his relevant Facebook posting (largely dedicated to moaning at Sarawak Report for breaking the story that Malaysia has been passed over as head of CHOGM 2020).

Indeed, to have approached the Commonwealth for monitoring support, Malaysia would have needed to notify the Secretariat at least six months previously (something NGOs and many opposition figures were begging it to do).  However, Malaysia has in fact not approached the Commonwealth for this reassuring support since way back in 1990, which was the last election when Observers were sent.

Instead, with a clumsy attempt at sleight of hand, Anifah Aman says he has enlisted the  ‘Malaysian Commonwealth Studies Centre (MCSC) of Trinity College, Cambridge’ to the task.  As with a BN politicians’ bogus degree, Malaysians are presumably supposed to read the words ‘Commonwealth’ and ‘Trinity College Cambridge’ and be impressed.

Yet, it hasn’t taken long to flush out the bogus credentials of this organisation, in terms of on the ground election monitoring or, indeed, objectivity when it comes to the Malaysian Government and its present leader.

For a start, attempts to contact, email or identify any premises for this organisation have proved hopeless. It doesn’t have staff or offices that are manned, reports the UK wing of Global Bersih, which has given up trying to track anyone down from MCSC – so what hope of manpower to supervise an election at short notice one wonders?

It gets worse.  A flurry of high-brow research on the part of Malaysian academics who prefer to remain nameless has soon produced a horrifying story of conflict of interest in the matter of MCSC relating to the Malaysian election.

To cut a long story short, MCSC (which primarily exists to conduct a respectable annual Conference on Electoral Democracy in Cambridge each year) is funded by another UK registered charity called the Cambridge Malaysian Education and Development Trust (CMEDT), which in turn is funded wholly by the Malaysian Government.

The Directors of MCSC have also doubled up as Directors of CMEDT, the academic researchers have observed, saying that this is clearly noted in minutes they have obtained from the University of Cambridge Council Finance Committee 11th January 2012.

One of the Trustees of CMEDT is none other than Prime Minister Najib Razak, currently running for office in the elections that he has drafted in the off-shoot MCSC to ‘observe’.  Also, as both PM and FM, Najib has, of course, funded the body and supervised appointments for years.  Also on the Executive Board of Trustees is Ahmad Sarji Abdul Hamid a former Chief Secretary to the Malaysian Government.

As for the proposed Monitoring organisation – the minutes show that it had not held a Board meeting since 2003! 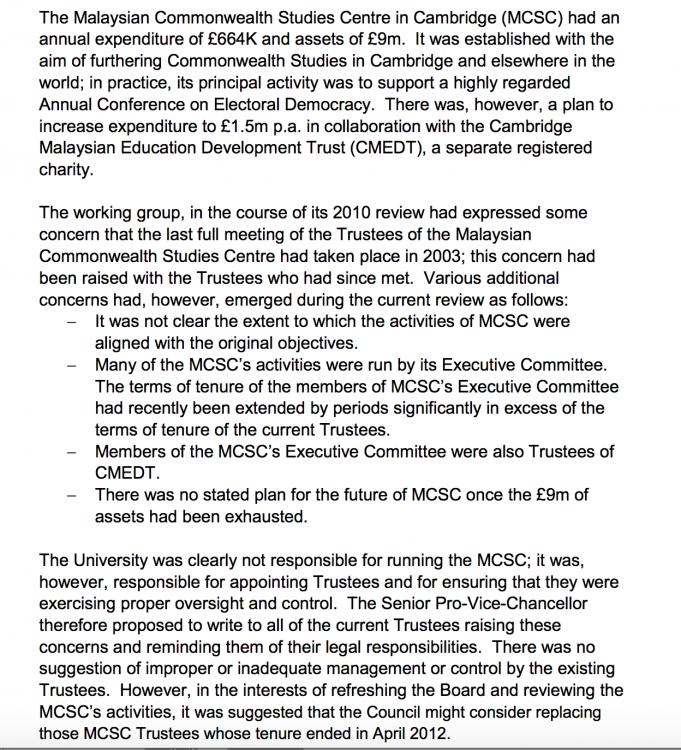 CMEDT’s 2017 Financial Disclosure, points out Sarawak Report’s academic sources, specifically acknowledges that the approval for the Malaysian Government funds to CMEDT amounting to £3 million (around RM20 million) were approved by none other than Prime Minister Najib Abdul Razak.  As one exasperated Malaysian academic told Sarawak Report:

“What this means is that the EC has invited MCSC (which is funded by the Malaysian Government via CMEDT) to monitor GE14. The EC is trying to deceive Malaysians that the conduct of GE14 is transparent and above board with MCSC providing independent international elections when it is not for two reasons:
a) MCSC is a Cambridge-based educational and research trust that specialises in organising an annual conference on electoral democracy. They have NO expertise in election monitoring, and
b) MCSC’s work on electoral democracy is funded by CMEDT that receives money from the Malaysian Government headed by PM Najib Razak, who approved funding for CMEDT, which in turn funds MCSC”

Meanwhile, plenty of informal but extremely effective monitoring is already underway, thanks to the independent network of self-selected volunteers down on the ground in Malaysia itself.

GE14 has not become known as the ‘Whatsapp Election’ for nothing and ordinary folk have started to take it upon themselves to record BN gatherings up and down the country, where candidates have already started handing out packets of cash.

Malaysians are welcome to come to their own conclusions as to whether this extraordinary trove of BN cash has yet again been obtained by robbing public funds once more or thanks once again to the inexplicable generosity of a mystery Middle Eastern royal prince, who thinks higly of Najib.

Sarawak Report suggests that the next Najib ban we ought expect will be against the use of mobile phones within a ten mile radius of polling booths on election day, within BN ceramahs or within sight of BN candidates!