How Is GE14 Being Funded?

Over the past eighteen months Sarawak Report has released investigation details, which show exactly how Prime Minister Najib Razak funded his political allies and elections expenses during the previous election, known as GE13.

There were also multi-million dollar payments made to Najib’s various lawyers (including Shafee Abdullah, central to the later imprisonment of the opposition leader) and to Najib’s close crony from Sarawak, Bustari Yusof, widely recognised as the man behind BN’s funding in the East Malaysian state.

Investigation papers drawn up by the Malaysian Anti Corruption Commission (MACC), who were looking into money misappropriated from 1MDB, showed that these payments were all channelled by Najib from a handful of bank accounts, which have already been identified as the recipients of money stolen from the development fund 1MDB.

Specifically, these included the AmBank ‘MR’ account no: 2112022009694, identified by the US Department of Justice (DOJ) has having been the direct recipient of a US$681 million payment in March 2013 that had been stolen a matter of a few days earlier from a bond issue raised by 1MDB for $3 billion.

They also included payments from a group of other accounts in the name of Najib, which had been publicly identified by the MACC investigations as having received millions of ringgit channelled from the 1MDB subsidiary SRC under the guise of ‘Corporate Social Reponsibility’ (CSR) payments.

Najib has of course denied these findings, claiming that the DOJ report is ‘Fake News’ and the CSR payments were a mistake. He has announced the $681 million was part of a series of donations from a mystery Arab well-wisher. The Attorney General, whom Najib drafted in at the height of the scandal, has concurred with this approach and has not asked the Prime Minister to repay the money ‘mistakenly’ channelled from SRC. 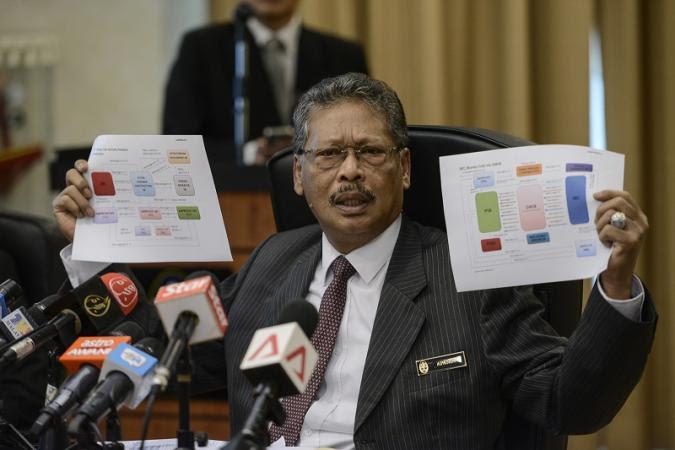 How AG Apandi undermined his own statement ‘clearing’ Najib, by holding up the investigation papers with the money trail that proved money went into Najib’s account!

Sarawak Report has published a number of articles showing the details of the above payments from Najib’s accounts, (see links at the base of this article).  In response, some of the alleged recipients have denied they received the money, whilst others have admitted it and stated they saw no wrong in receiving money from the Prime Minister – a political ally. Most have remained quiet.

No one has filed any form of official complaint over the figures we have printed, which we explained were leaked from the MACC investigations.

What this shows is that BN found it necessary to spend hundreds of millions of ringgit in excess of the allowed limits on election expenditures on GE13, which was either stolen from the Malaysian public or offered by a mysterious foreign power (take your pick).

That was BEFORE Najib Razak was internationally exposed as a kleptocrat and the falling ringgit, rising prices and introduction of GST made life far more miserable than before for most Malaysians.  It was BEFORE a number of Najib’s most senior and respected political allies marched over in disgust to join the opposition.

Sarawak Report therefore suggests that the likelihood that BN and its frightened leader will aim to spend as much if not even MORE on this election, attempting to bribe and manipulate the election, is high.

There have been numerous well-founded concerns and investigations into the management of several of Malaysia’s most significant public funds over the past five years, as everyone is more than painfully aware.  Billions have disappeared from FELDA and Mara under suspicious circimstances and fire-sales of foreign properties bought up by other funds are now taking place.  Sarawak Report has raised concerns about goings on at other funds, which have not been satisfactorilly or fully answered.

As the ringgit notes start circulating at BN’s ceramah’s once again or round the backs of polling stations, people need to remember a number of things:

First, that they are being offered back a paltry fraction of their own stolen cash in return for allowing the thieves to retain the keys to the savings funds meant to support pensions, pilgramages and other welfare programmes  – mere ‘dedak’ from the real booty that will go into fancy cars, homes, investments and more for the chosen inner circles of BN.

Second, that if they accept the money and then vote the other way there is actually nothing BN can do about it.