Najib's Gives Up On Plans For Commonwealth Glory

It is now clear from several sources that the Malaysian caretaker Prime Minister, Najib Razak, has scrapped plans to attend the Commonwealth Heads of Government meeting in London and at Windsor Castle this week.

He will not be turning up as planned for meetings on 19th nor attending the so-called Business Forum organised his friend, Lord Marland, who is a shareholder and self-designated Chairman of the private limited company that goes by the name of The Commonwealth Enterprise & Investment Council.

If he had, there was a certainty that he would have been met with protests by the considerable population of Malaysian activists in London, furious over the latest crackdowns in Malaysia, including blatant moves to favour Najib’s chances even further at the coming election.

However, this is unlikely to have been the deciding factor in his decision to stay away, which effectively means he is surrendering long-held plans for Malaysia to take over as the next host for the Commonwealth Heads of Government meeting due in 2020, which was due to be held in Kuala Lumpur. 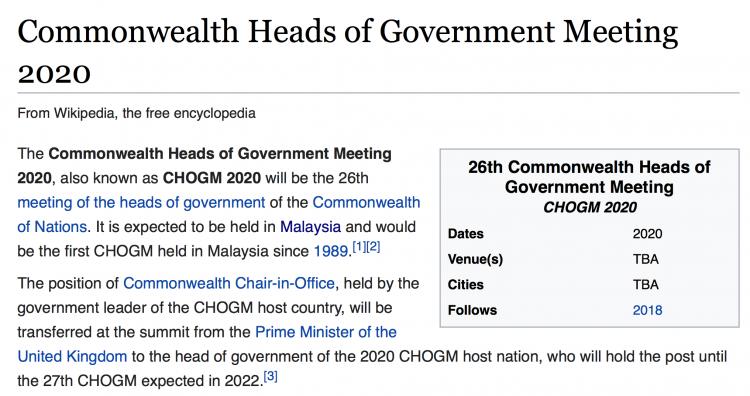 The present UK host, Theresa May, would have handed over to Najib… had he turned up!

Under this anticipated plan, Najib would have expected, in the event of an election win, to have basked in the considerable prestige of being the host of this major multi-nation event – and designated as Chairman of the proceedings.

However, Sarawak Report understands that, despite Najib’s continuing strong relationships with British businessmen regarded as having clout in Whitehall and with the present day government, such an outcome has increasingly become regarded as a potentially intolerable embarrassment to Britain and the rest of its Commonwealth partners.

With criminal proceedings looming in the United States over 1MDB; the recent further crackdowns on democracy and the disgraceful passing of the so-called Fake News law, blatantly designed to outlaw discussion of 1MDB and other scandals, the Commonwealth of Nations and the Queen were facing the opprobrium of being hosted in 2020 by a world famous kleptocrat as the figure-head of their union of shared values.

Somebody tactful was going to have to tell Najib that he would have to step away from attempting this scenario and that his first move would be to remove his presence from this  prior meeting in London.  After all, it is traditional practice that the handover for the next event takes place at the preceding conference and that the presence of the next host is therefore required at that event.

By staying away from London this April, Najib has therefore effectively ruled out Malaysia from taking over as the Commonwealth’s next Chair in 2020, despite the write-ups already prepared online.

He has the perfect excuse, as suave Whitehall officials will have consolingly advised.  After all, he is in the middle of a ‘democratic election’, which involves all the sweat and effort of prolonged campaigning (not quite true, given Najib has cut the campaign to one working week, but nearly).

Fiji is now tipped to be the country to step forward as the 2020 hosts.  Deep sighs of relief from Britain’s Foreign & Commonwealth officials, who have already been fielding parliamentary questions over the embarrassing affair.  Yet, unfortunately, more shame for Malaysia, thanks to their kleptocrat PM.