In February Sarawak Report released details of a trove of documents, obtained from well-placed sources by an Australian-based blogger, which pointed to an alleged multi-billion ringgit money laundering exercise, involving cash from public funds controlled by the Ministry of Finance.

One of the funds targeted in a series of schemes, according to the documents, was the Employee Provident Fund (EPF).  The Integrated Medical Cities project, targeted at a RM47 billion investment was one.

From a period starting in 2015, bonds owned by EPF were allegedly proferred as collateral to raise money for this supposed medical project to a financial firm based in Luxembourg and the United States, named Limage Holdings S.A.

EPF has categorically denied that the RM10.64 billion worth of bonds in question were utilised in this way to raise some $4 billion, as indicated by the extensive documentation viewed by Sarawak Report.  In a statement to Sarawak Report it has claimed that the documents, which include a notarised indemnity to Limage allegedly signed by an EPF senior manager, are fraudulent and forged.

The Employees Provident Fund (EPF) strongly refutes the statements by Sarawak Report in its blog and Facebook posting today. The EPF has never had any dealings nor entered into any agreements of any sort with Limage Holdings SA, Limage Southwest Holdings, the individual known as Mr Matrai nor any parties as stated by the Sarawak Report. As such, no transfer of bonds nor funds of any kind to any of the aforementioned companies, parties or individual could have occurred as alleged.

The chronological order of events known to the EPF are as follows.

On the other hand, the fund has in the process of its various denials confirmed that the bonds referred to are indeed genuinely controlled by EPF (something that was not possible to know from public records).

“Arising from the recent annual audit conducted by National Audit Department, we can confirm that the bonds in question remain in the ownership of the EPF, via confirmation received from PayNet in January 2018,” it said in a statement today.[The Edge, March 7th]

Beyond this, EPF has categorically denied that it has been in any way involved in funding a RM47 billion Ministry of Health backed project to build no less than 15 so-called Integrated Medical Cities across Malaysia.  “As a matter of clarification, there has never been any “KWSP Medical Cities Project”, EPF/KWSP’s Corporate Affairs reiterated in an email to Sarawak Report last month. 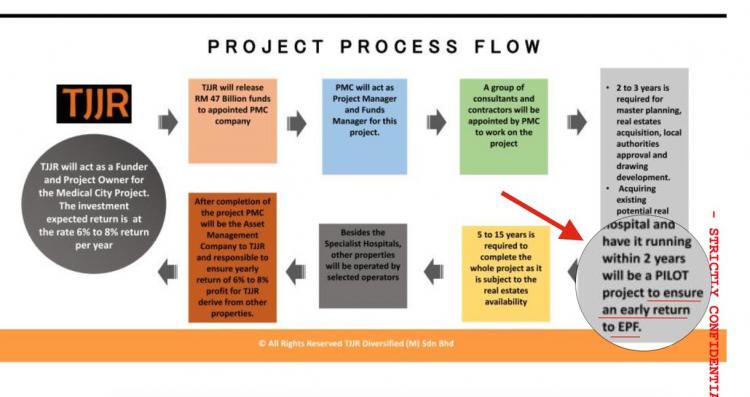 Likewise, RHB Bank, which documents also suggest had opened an account on behalf of a company named TJJR Diversified Sdn Bhd, described as EPF’s proxy in the project, has also denied any involvement. 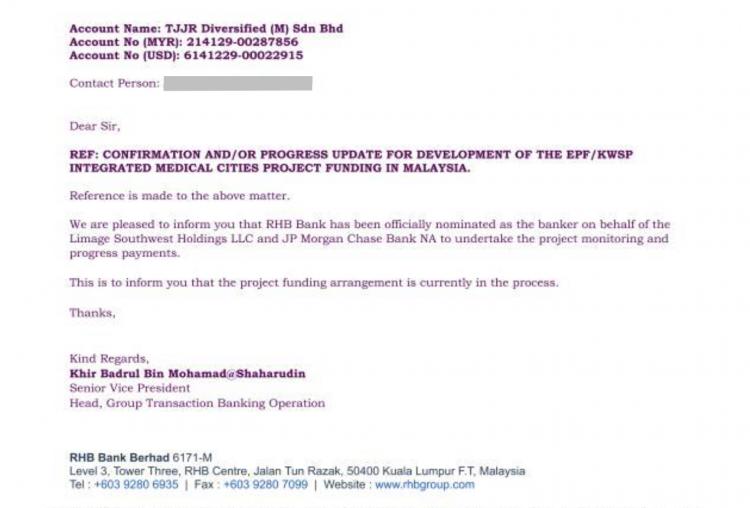 The bank has rejected information passed to Sarawak Report, which was that the project and related accounts were designed to provide a cover for the importation back into Malaysia of up to US$4 billion raised from the collateralised bonds for Najib to fund BN’s election expenditures.

Yet, despite these denials, in the past days Sarawak Report has identified and spoken to yet another respectable international witness, who has acknowledged that they knew about the supposedly Malaysian Government backed Medical Cities project and were asked if they were willing to give professional support to the purported project.

Why Are So Many Reputable Third Parties Contradicting EPF?

Miller’s successor at Ladylaw, the Australian Nic Manikis, has acknowledged that several of the documents relating to EPF negotiations with Ladylaw from the dossier made available to Sarawak Report are genuine, even though EPF has denied the existance of any such negotiations and implied this matter is also part of an apparently extensive and elaborate fraud lasting several years.

Manikis and his lawyers along with professional land agents have all testified to the dealings between EPF and Ladylaw and to the genuine nature of those particular documents.

Moreover, Manikis has also confirmed that he personally visited EPF when he took over the company and discussed investments with General Manager Ja’afar bin Rihan, together with the Director of TJJR Diversified Sdn Bhd, Junaidah binti Hussin, who was introduced as EPF’s partner on any potential deals.

Particularly significant is the fact that Nic Manikis has also confirmed that Ja’afar bin Rihan and ‘June Aida Hussin’ also raised and discussed with him their proposal for the Integrated Medical Cities Project during 2014, as a way that money could be invested by EPF through his company.  Manikis says he made clear at the time that he was not confident that his company would be suited to such a form of investment project and that negotiations with EPF then dried up.

All this EPF has denied and the fund has also denied any involvement with the Ministry of Health over the matter.  The rebuttal implies that pages of presentations allegedly prepared by TJJR Diversified and related companies are also fakes and forged.

These would include a lengthy presentation produced in 2017 by a Malaysian subsidiary (Diver Module Sdn Bhd) of a Panama company named Grupo Diversica, which details proposals for building the cities, which are described in memos as being financed by EPF and supported by the Ministry of Health. 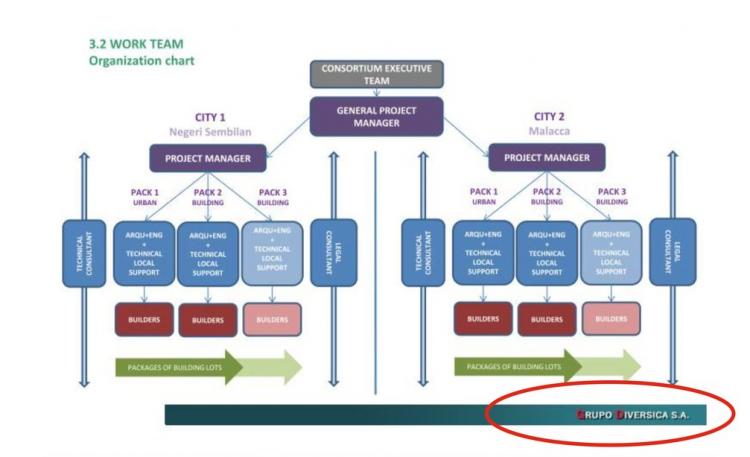 However, despite the denials, Sarawak Report has established that companies featured in these supposedly fraudulent presentations were indeed approached last year about the alleged Integrated Medical Cities project.

A number of specialists in the financing and architecture of hospitals, based mainly in Barcelona, feature in the proposals as experts brought in by Grupo Diversica.  Sarawak Report has been told the purpose was to provide a convincing semblance of a mega-project, in order to warrant the importation of large amounts of cash back into Malaysia. 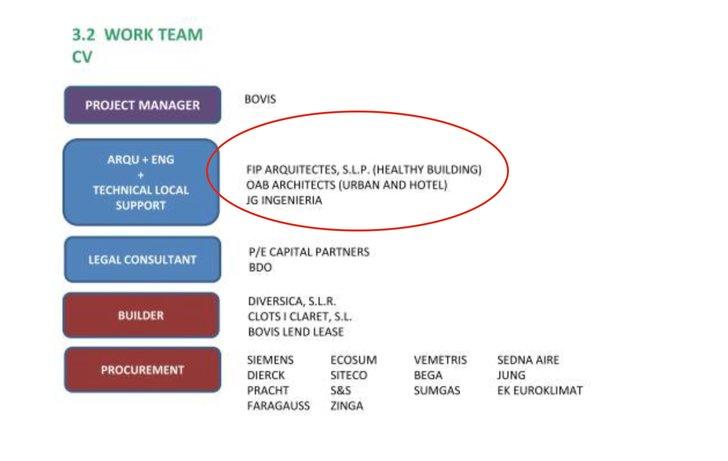 One of the featured entities, an established firm of architects named FiP Arquitectes SLP, has acknowledged its involvement.  Speaking to Sarawak Report on Wednesday, a partner in the firm, Isabele Pasqual Pellicer, confirmed that an agent in Spain had been in contact with her firm about the project last year.

Speaking in Spanish, she explained she had indeed received outline details of a ‘Masterplan’, sponsored by the ‘Government of Malaysia.  There were to be several of these medical complexes, as she understood, and it represented an enormous investment and a possibly very big project for her company.

However, after receiving just a one page initial proposal, she then heard nothing more about it.

“There were to be complexes including shopping centres, business areas, residential, hotels, restaurants.  I am a specialist in the architecture of hospitals and I was referred by contacts who are linked to a particular hospital I work with here in Barcelona” [Translated]

Pelicer explained.  She did not wish to name the agents who had been in touch over the project and she said she had not heard of the ultimate company purportedly behind the project, Grupo Diversica in Panama.  Sarawak Report believes that the hospital concerned is El Consorci Sanitari de Terrassa, from where several employees are featured in the allegedly bogus project. 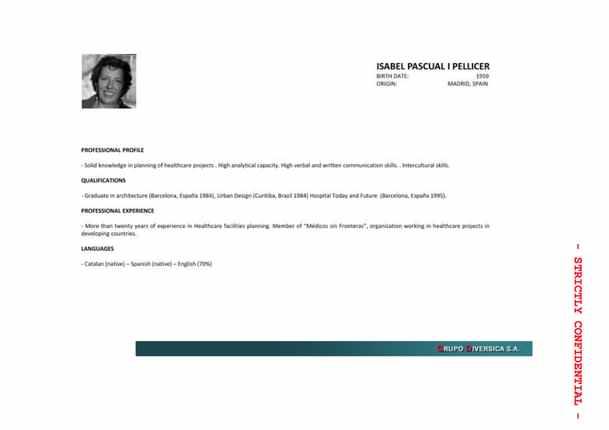 Isabel Pelicer – yes I was introduced to the project in 2017

Sarawak Report has yet to track down those further experts in finance and hospital management who are cited in the report and the owner of Grupo Diversica has yet to return messages asking for comment.

However, the confirmation that companies in Spain have been approached to become engaged in Malaysia’s phantom Integrated Medical Cities project as late as last year, throws further doubt over attempts to dismiss the matter as a mere elaborate forgery and hoax.

Sarawak Report suggests that EPF and RHB ought to be actively progressing investigations into the apparent fraud to discover why there are such an elaborate series of claims backed by documents, which indicate that money may have been indirectly raised at the fund’s potential expense.

Why, if police reports were filed on the matter in 2015, were negotiations still progressing in 2017?

Certainly, as unexplained cash once agains pours into BN’s election campaign, Malaysians need to consider where that has come from, if the allegations that there was no such bogus mega-project devised.

Perhaps, the Prime Minister has struck lucky with a second Arab prince?