Sarawak Report Explains Its Reasons For An Alleged "Smear" Against Petros

Over the weekend the office of the Chief Minister of Sarawak, Abang Johari, issued a statement, which revealed that a memorandum announced with great pomp as the ‘first deal’ by Sarawak’s state oil company, Petros, in January has now ‘lapsed’.

This newsworthy development was made public in response to an article by Sarawak Report, which the chief minister claimed was an attempt to “smear” Petros, for “reasons best known to Sarawak Report”.

However, the statement raises many more questions than it answers, besides inviting Sarawak Report to explain exactly why it drew attention to the memorandum and to Petros over this matter.  We are more than happy to do so. 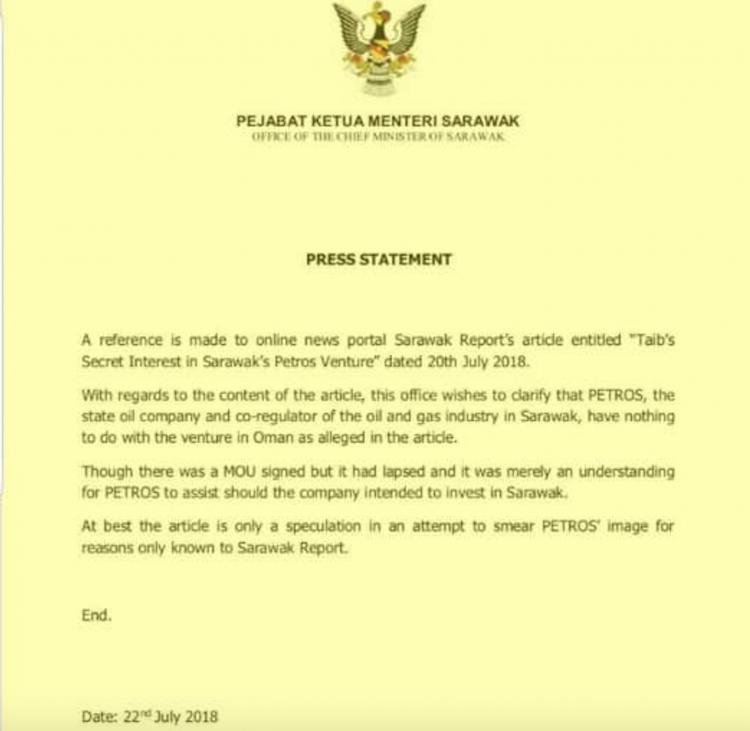 This news site is concerned as to the real motives behind an astonishing volte face, just before the last election, when Abang Johari’s state government announced on 6th March a decision to over-turn decades of party policy with regard to the oil and gas reserves of the state, by issuing a direct challenge to the control of Petronas and the federal government over Sarawak’s oil. 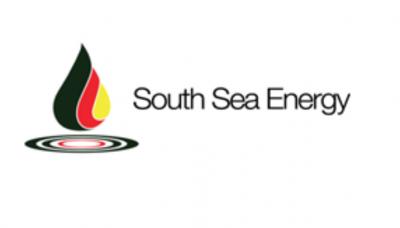 As part of the move Johari formally announced the setting up of Petros, a state oil company that would take control of all Sarawak’s oil reserves in future, independent of central government.

Supporters of the move pointed to the lack of validity of the 1974 Petroleum Development Act, which had handed the oil reserves to Petronas, a claim Malaysia’s oil company has sought to gain a legal judgement over.

BN’s apparent agreement was seen as a massive concession by then prime minister Najib Razak, whose position in the run up to the GE14 had become increasingly weak. Harapan leader Dr Mahathir had reached out to his old ally Governor Taib Mahmud, who controls Sarawak’s wider economy and the political leadership of the state, and this concession over oil rights is judged to have been the price exacted by Taib to keep the Sarawak parties within BN. This is how the deal was reported in the Straits Times:

The announcement comes after Malaysian Prime Minister Najib Razak gave assurances that Sarawak’s longstanding demands will be met.
With the general election just around the corner, the Prime Minister is seen to be pulling out all the stops to ensure that the gas-and timber-rich state remains loyal to the ruling Barisan Nasional (BN) government. [March 17th]

Given that BN and its local affiliates had for years doggedly rejected opposition claims to increase royalties from Petronas from 5% to even a miserable 20% this change of stance was an intriguing break with past policy.  So, Sarawakians have every right to know what exactly is going on behind the scenes in the name of restoring the oil rights to the people of the state, given the long record of self-serving decisions by their elected representatives.

Even prior to formally establishing Petros and while the Board of Directors was still seeking a CEO, the ‘100% state owned company’ had already set about pulling together what it advertised as its ‘first deal’ announced in January during what was described as a five day working visit by the chief minister to Oman.

The signing of this memorandum was treated as a centre-piece of the chief minister’s working trip together with a grand signing ceremony with a photo-op provided for the Sarawak newspapers, including all the main players in this much vaunted agreement. 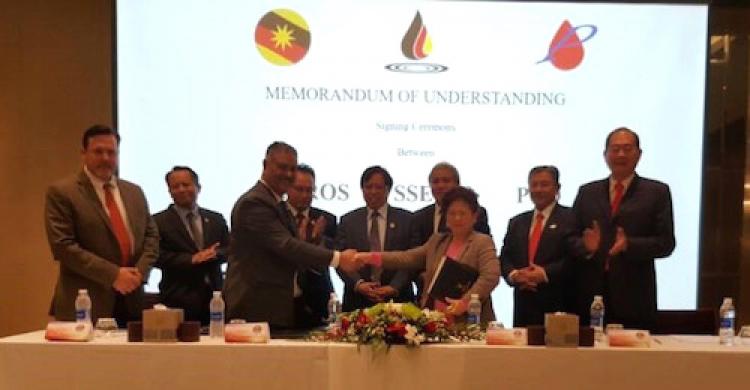 To attend the grand occasion a plane load of Sarawakians had made it over to Oman for the signing of the MOU.  Centre stage, as the photos show, was one Lily Chin, director of the company South Sea Energy (SSE), together with SSE’s ‘executive director’ none other than Tiong Kiong King, the brother to Taib Mahmud’s key business crony, the founder of Rimbunan Hijau.

Accompanied by Tiong and overseen by Abang Johari, Ms Lily Chin is featured first signing the MOU and then stridently shaking hands with one Dr Anil Chopra, the Chairman and CEO of the PetroTel Group, which had been selected by Sarawak as its partner to enter into “collaborations” and “explore possibilities of cooperation to develop the downstream sector of oil and gas industries in Sarawak”, according to the announcement.

The announcement further made clear that Lily Chin and South Sea Energy were somehow included in the MOU. However, the exact details of what had been agreed (let alone provisions for it to lapse by July) do not appear to have been expanded upon for the benefit of the public.

So, what was the point of all this grandstanding involving Sarawak’s chief minister; how come the whole arrangement is now lapsed and why was this lapse only made public the day after Sarawak Report pointed to a hidden involvement in the deal by Sarawak’s all-powerful politician Governor Taib Mahmud?

Yesterday’s statement by the chief minister’s office has now made clear that the commitment of Petros in the MOU was “merely an understanding to assist should the company intend to invest in Sarawak”.  This paints a considerably different picture to the talk of ‘collaboration’ and ‘cooperation’ in the earlier announcements.

By ‘company’ the statement appears to be refering to “the venture in Oman as alleged in the [Sarawak Report] article”, meaning the joint venture between PetroTel and South Sea Energy.

So, how do SSE’s Lily Chin and her tycoon executive director Tiong Kiong King fit into the picture as co-signatories to the memorandum relating to Sarawak?

What Sarawak Report had established when it drew attention to the deal was that SSE was described as a key joint venture partner in the PetroTel exploration work in Oman, back in March 2016 when the local press reported a $150 million dollar lending deal made to SSE by an Omani bank.

SSE was described a Sarawak company with international experience in oil and gas, however the investment was to be in Oman in an onshore exploration of Block 17 controlled by PetroTel.

It was also significant that there was no sign of Lily Chin or Tiong in this initial joint venture and loan arrangement with PetroTel and the Omani bank. The people present were the Sarawak Governor Taib Mahmud and his son Abu Bekir Taib, described as the ‘Executive Vice-President of South Sea Energy’ (the name of the President was not provided).

The facts would appear to be, therefore, that a company in which the Governor and his family has held extremely recent and yet undeclared interests was now seeking to become the first party to invest in Sarawak’s newly re-appropriated oil fields.

Furthermore, to cement that opportunity, the chief minister of the state (and long-time political underling of Taib) undertook a major five day official visit to Oman to oversee the deal.

If these are the facts, as widely reported, then how come the allegation of a “smear” by Sarawak Report and why the sudden dropping of the plans once this connection had been revealed?

Save Sarawak’s Oil For Sarawakians!

Decades of corruption and asset stripping by the present political leadership of Sarawak should give no confidence whatsoever to local people in the handing of their remaining key asset to the same bunch of kleptocrats.

Taib and his colleagues have all become staggeringly wealthy as a result of occupying political roles in Sarawak, which of itself would be adequate to convict the lot of them of criminal misappropriation of public money were the laws to be properly upheld.

As is its, politically controlled law enforcers have till now expressed themselves willing to accept a ludicrous excuse that Taib can be ‘cleared of wrong-doing’ because he stepped out of the room to allow underlings to sign the contracts that made his fortune.

Much in the same way his former federal boss and protector Najib Razak is attempting to blame the employee, who managed his billion dollar bank accounts for stealing the money he himself spent on buying elections, buying movies, buying diamonds and further stolen luxuries.

It would appear that Lily Chin and Tiong did the honours on the deal for the South Sea Energy deal in this respect.  After all, this private company, which is described as having ‘international experience in the oil and gas industry’ provides zero information on its executive office holders or its operations on its website and is described as ‘dormant’ in the register of companies.

Founded in 2008 it has a million ringgit issued shares, two million ringgit worth of assets and seven million ringgit of liabilities. Its revenue in 2016 was ‘zero’.  The sole apparent purpose of inserting this empty company into a deal involving Sarawak’s oil would appear to be to divert a goodly section of the profits, following that earlier investment in PetroTel.

If things are not as they look, then this is the moment for the chief minister’s office to come out with a fuller statement and further details on the MOU and the agreements involved. The exact role of the Governor’s family needs to be explained.

Meanwhile, much as Sarawak longs to retrieve its oil rights they ought not to be handed to the man who cashed in the entire rainforest of the state, made billions from palm oil concessions and then snatched the lions share of its economy through contracts and mega-projects handed to his own family companies.

Taib and his gang must not be trusted with Sarawak’s oil, which should be put under the control of a transparent and professional body, where contracts are clearly negotiated and profits accounted for down to the last ringgit.

If that alone is not enough to convince any objective onlooker, then remember: it was Taib Mahmud, who together with his uncle negotiated and signed the disgraceful and illegal 1974 Petroleum Development Act, which his present underlings now have the cheek to contest over four decades on.

For all that time Taib as chief minister tolerated that illegal arrangement against the interests of his suffering people, even though he as a lawyer knew full well that it had failed  to have been ratified by his own state parliament.  The reason he tolerated this injustice and allowed Sarawak’s oil to be siphoned out by Petronas was because in return the federal BN government agreed to allow him total impunity to rape the remaining resources of the state. Which he did.

Taib has now taken his opportunity to crusade against the legality of his own law, in order to attempt to profit further.  These are not the actions of a senile old has-been, but the continuing pattern of greed by a family who do not know the meaning of restraint.

The Harapan government and MACC need to investigate Taib for his past misdeeds as well as for the present oil grab, and the people of Sarawak need to hold him and his colleagues to account as soon as possible.

We hope this makes the reasons for our article clear to all.