After years posing as a great defender of Sabah’s fast depreciating forests, Sam Mannan has now been exposed as one of the main drivers of destruction, issuing licences for illegal clear cutting in supposedly protected areas across the state.

He was sacked on Friday August 3rd following a major taskforce investigation into the disgraceful practices of his department intitiated by the new Chief Minister of the state.  Our exclusive copy of his letter of dismissal dated 31st July says:

“The state government has decided based on state law 59c … to terminate the contract signed between Sam Mannan and the state government on 2nd August 2017, effective in three months from now.  The last day will be 31st October 2018″ [translated] 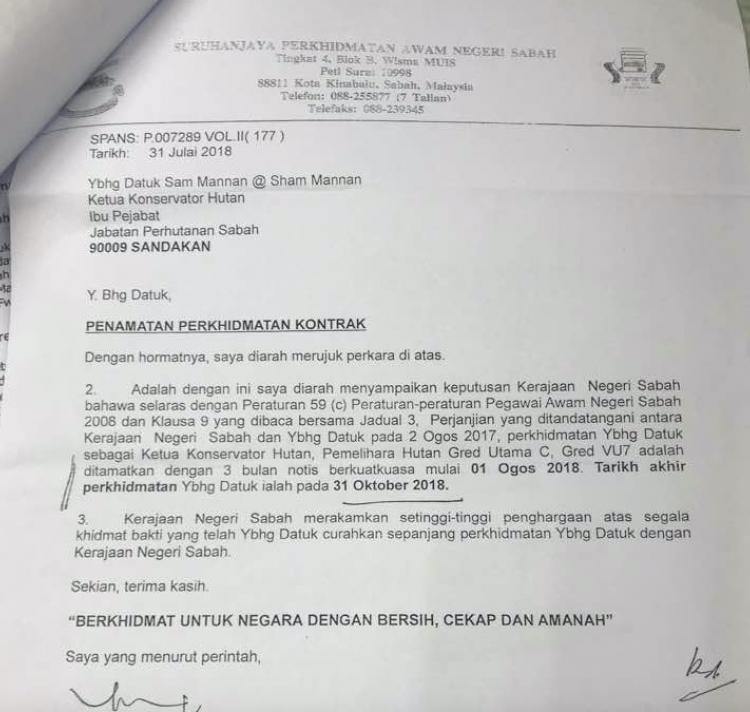 It is understood he will shortly take extended leave to see out his contract.

The development comes after evidence had been gathered of extensive licencing of illegal logging practices authorised by Mannan during the month long Operation Forest Storm 2 launched by the new Chief Minister, who took over after a hotly contested transfer of power in the May elections.  Shafie Apdal has pledged to clean up illegal logging in the state.

Sarawak Report has challenged Mannan over a number of controversial logging operations sanctioned by him during his two decades in the job.  However, he continued to enjoy the protection of the previous Chief Minister of the state, Musa Aman, himself a former chairman of the Sabah Foundation, main custodian of the forests of the state.

Musa Aman is now on the run, his location unknown, since being forced out of office. In the course of 2012 Sarawak Report had detailed tens of millions of dollars in timber kickbacks he himself received from logging contractors, which had then been funnelled through a web of off-shore companies, through Hong Kong and Singapore into a Zurich UBS bank account.

Despite the expose, Musa Aman, who was the brother of the previous Foreign Minister Anifah Aman, continued to be in turn protected by former Prime Minister Najib Razak. Sarawak Report has received information that the Malaysian authorities have issued a Red Notice INTERPOL alert for his arrest, after he secretly crossed the border into Brunei and then fled initially to Britain.

King of the Forest

Sam Mannan liked to be known as the King of Sabah’s forests and was for many years Musa’s right hand man in managing – or rather mismanaging – what was left of the Borneo Jungle in the state.

Despite posing on the international stage as a fervant environmentalist, within logging circles in Sabah he was criticised for his corrupt issuing of licences against state policy, to the lasting detriment of the forests.  Many such licences were issued to close colleagues and established timber cronies.

On the one hand he was photographed with Prince Charles at forestry events and was on hand to welcome Prince Willliam and Kate to the Danum Valley reserve, on the other he was issuing licences against the rules.  Sarawak Report has evidence that a police report has now been issued citing numerous such offences amounting to 40,161 logs now seized and pending investigation.

EXCLUSIVE – police report into the Lim companies suspected of illegally harvesting over 40,000 logs

The owners of many of the above companies are established offenders when it comes to timber kickbacks to Musa Aman and his circle, namely the brothers Andrew Lim and Freddy Lim from Sandakan.  There are concessions also to another tycoon, Elbert Lim Yu Min from Tawau.  Sarawak Report has cited how several timber tycoons were involved in multi-million dollar kickbacks to Mannan’s former boss, the fugitive Musa Aman.

However, despite an MACC report that had recommended no less than 42 charges be laid against Musa in 2013, Najib through his then Attorney General Gani Patail closed the case.  As with the subsequent 1MDB scandal it has been left to foreign investigators to take up the slack. In this case the Swiss Attorney General has once again issued proceedings in the matter with a current prosecution ongoing in Berne against UBS Bank, which is facing money laundering charges for handling Musa’s Hong Kong and Swiss accounts. 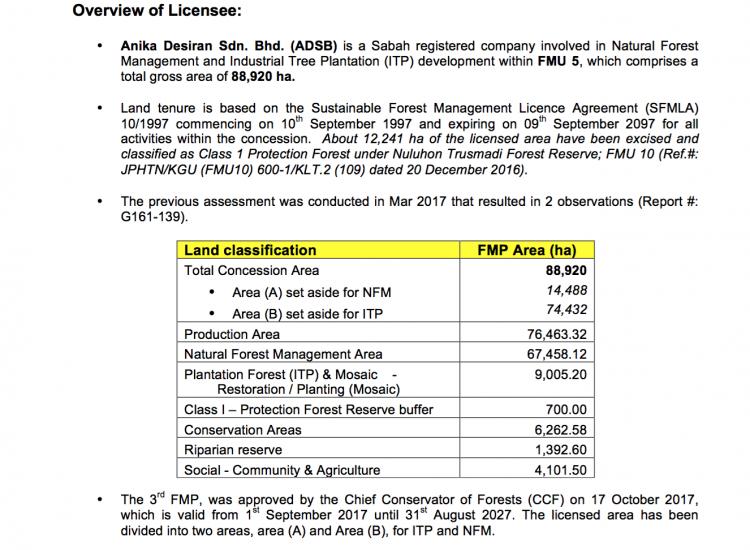 The forest, as the licence details, is known to be home to a variety of endangered species, including the clouded leopard, gibbons and orang utan.  Nevertheless, Sam Mannan, who has postured as a protector of such species authorised the destruction.

Thanks to Operation Forest Storm and the new goverment, this area has now been saved from the chainsaws.  Yet Mannan authorised this and many other similar illegal licences according to evidence gathered. It appears that under his watch  Sabah had simultaneously presented a conservation face to the world, while in reality the political leaders of the state were converting the timber for cash.