Sarawak Report has learnt that lawyers acting for Selvi Bala, who has sued the former Prime Minister, his wife and their assistants for blackmailing her husband, a witness to the murder of Altantuya, will now lodge commital proceedings against their lawyer Shafee Abdullah and two others.

Deepak Jaikashan, one of the defendants in this long-running case and a former business partner of Rosmah Mansor, lodged a devastating police report at the end of last week, in which he described in full detail how his lawyer Shafee Abdullah and accomplice Datuk Azeez Rahim had contrived to prevent him giving evidence in the case.

In the police report Deepak explained how he had been prevented from turning up in court no less than three times by his lawyer on a false pretext that he was unwell. Deepak has now stated that he was not unwell, but that Shafee and his accomplice Datuk Azeez (a well known confidante of Najib and Rosmah whom they appointed to be Chairman of Tabung and to a number of other official positions) arranged for doctors’ certificates to state he was too ill to give evidence.

One one occasion Deepak was admitted into a KL hospital overnight before the trial and one Dr Ganesan was organised to issue a medical note to say that he was unfit to be present in court. In fact, Deepak has now told the police he was perfectly fit, but being pressured by his legal representatives, whom he says were forced upon him by Najib.

The result of these delays was that the hearing of the case, where Deepak was preparing to give evidence that would expose Najib and Rosmah as the “masterminds and prime beneficiaries” of the scheme to silence PI Bala, was continually postponed until after the election.

Now that the businessman has come clean about the situation with this police report, Selvi’s lawyers have indicated they will be filing committal papers before the end of the week for serious contempt of court on the part of Shafee, Azeez and the Dr Ganesan, who issued a false medical note (Deepak says he walked freely round the hospital and left the next day, despite having been described as bleeding and bed-ridden).

“They will be applying to commit them [Shafee, Azeez and Ganesan] for contempt of court in interfering with a witness and keeping him away from being cross examined in court. This ought to be punishable by prison or a fine or both, given it is a matter of interfering with witnesses and perverting the course of justice”

one person close to the case told Sarawak Report.

Trapped Witness Who Wanted To Tell The Truth

Deepak had indicated on several occasions that he was willing to speak the truth about the handling of PI Bala’s Statutory Declaration, which lies at the centre of his widow’s case. PI Bala was a private detective who had been hired to monitor Altantuya, who shortly before her murder had been threatening to reveal details of massive backhanders made to Najib’s proxy Razak Baginda during the purchase of French Scorpene submarines back in 2006.

After the controversial trial, where Najib’s bodyguards were convicted of the murder but no attempt was made to establish any motive, PI Bala issued a statutory declaration explaining that both Altantuya and Baginda had told him that the Mongolian had been Najib’s mistress and had threatened to expose the matter.

Yet, within hours of that declaration, Bala had been ‘turned’ and the next morning he issued a second revised Statutory Declaration to the media, in which all mention of Najib was selectively removed. Bala was then spirited out of the country for some years and Selvi is now suing for the financial damage caused to her family as a result of that enforced exile.

Her case states that it was Najib and Rosmah who organised for two of Najib’s brothers, some lawyers and Deepak (then a confidante of Rosmah who knew Bala) to meet with Bala and force him to change his mind, in the face of physical threats to his family and promises of a large pay off (little of which was paid).

Deepak indicated on a number of times that he was ready to admit his role during the course of Selvi’s case, however the other witnesses succeeded in striking out the widow’s claim against themselves.

Having refused to strike out the claim, Deepak has told Sarawak Report that he was brought under enormous pressure by both Shafee Abdullah and Datuk Azeez to change his position on the case.  He has copius evidence including recordings, documents and text messages to show that Azeez, acting as an emissary from Najib, urged him to cooperate and to hire Najib’s lawyer Shafee to handle his case in court.

Old tax issues were revived to pressure him, according to Deepak, and even a bank was pressured to revive demands on a loan, which had already been settled many years ago.  According to Deepak, both the tax demands and the bank loan were related to business involving Rosmah, for whom Deepak was acting as a proxy at the time.

See the police report below: 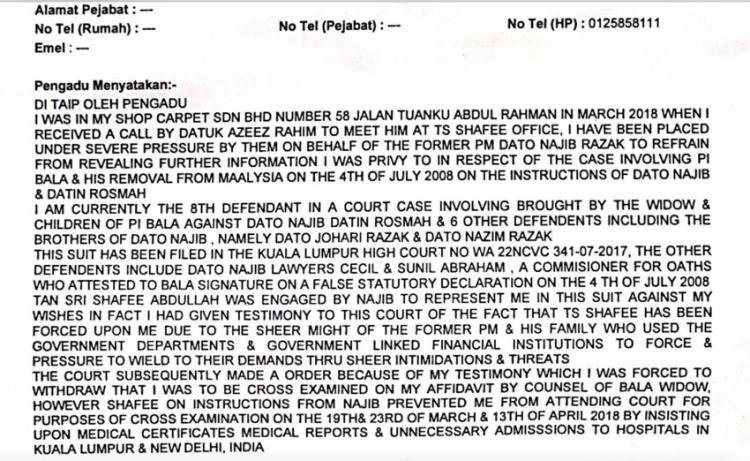 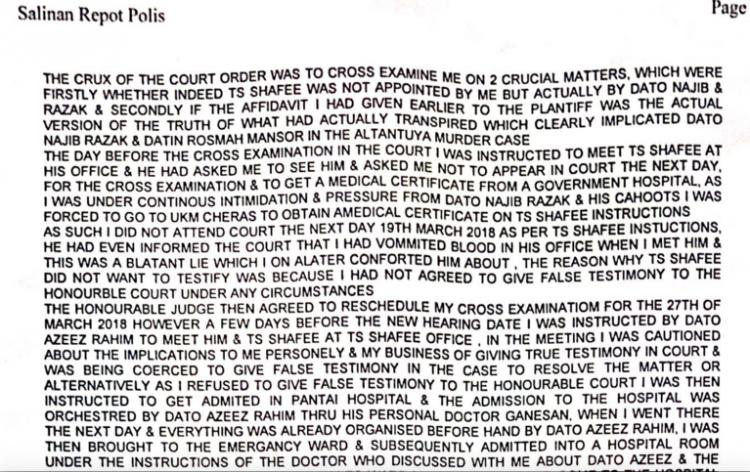 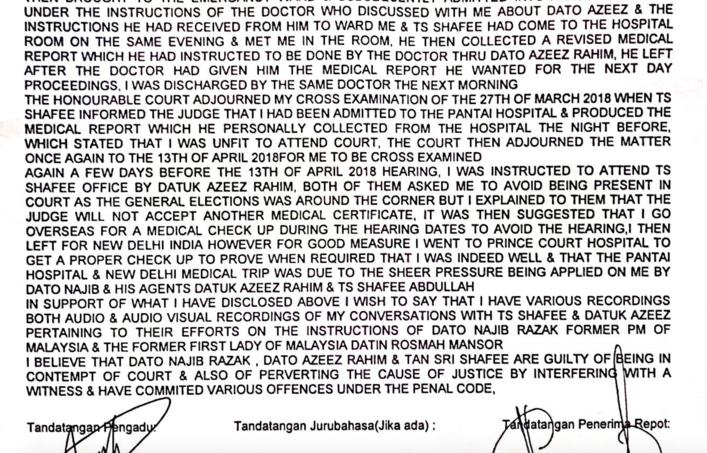