Shafee Admits He Lied..... And Then Tells Another Tall Story!

Have you heard the one about the prime minister and the one billion dollar donation from an Arab Royal (no strings attached)?

Well, here’s another even taller story.  The chief lawyer to the aforementioned pirme minister has admitted after publicly claiming it was “nonsense” that he had after all been paid RM9.5 million by Najib Razak out of money stolen from 1MDB.

Earlier he had denounced Sarawak Report for exposing it and threatened to “see Anwar in court” for suggesting he had been bought, has now admitted the payment was in fact entirely true.

Shafee had never imagined, of course, that BN could lose the last election and that all the forces of law and order would then be unleashed to investigate the whole affair. With the proof and documentation now presented by the public prosecutors in open court the lying lawyer has had to acknowledge the truth at last.

He should be stripped of the right to practice immediately and thrown off the defence team for Najib Razak, which attempted to gag the entire proceedings, accusing none other than Sarawak Report of falsifying information on grounds of bias.

However, Shafee still thinks he can explain his way out of the situation with a laughable tale of woe. The RM9.5 million was an act of kindness for a friend who needed a new house for his growing family, he said yesterday. What a big family it must be!

Because of this tear-inducing situation the sharp suited lawyer had decided to tot up bills owing to him from UMNO for whom he had worked for simply years without getting round to pressing for payment. Perhaps he thought UMNO was short of money?

Shafee goes on to explain that he therefore took an opportunity of a “chance meeting with” his close friend and confidante, Najib Razak, to raise the matter with him out of the blue.  Why he had never done so on all the previous occasions when they had hunkered down together, for example to discuss how to manage the supposed allegations by one Saiful Bukari against Anwar and then strategise Anwar’s prosecution, is not explained.

After Shafee had brought it up on this unspecified occasion Najib immediately paid ou,t the lawyer’s latest story continues – but not from UMNO’s various offical funds, which you would expect to be the case given Shafee claims it was for accumulated official legal services or as he put it:

“Cases that were assigned to me and my firm ranged from election petitions to other serious litigations involving Umno and BN.  I remember undertaking litigation works on behalf of Umno and some other clients in relation to the mega damages in defamation matters”

Najib paid Shafee out of his own bank account instead (from money that Najib says he thought was donated from the Arab royal, but has also now admitted came from 1MDB instead).

Strangely, Najib did not pay the money in one cheque.  As Sarawak Report originally correctly reported, Shafee received one payment RM4.3 million in 2013 and a later payment of RM5.2 million in 2014. That RM5,200,000 received in February 2014 came just a fortnight before the Appeal Court overturned the earlier acquittal of Anwar, after Najib had specially brought in Shafee to handle the prosecution case.

Shafee still says this was not a payment for those services however.  He still claims that he did that bit of work for UMNO for free – or rather he claims he did it “for the country”.

Pascal Najadi, the grieving son of the murdered banker Hussein Najadi, former Chairman of AmBank, has pointed out that the payment in September 2013 came just a month after his father was shot dead. 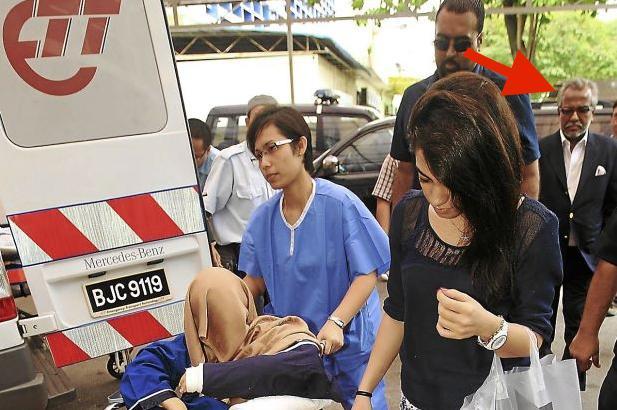 Shafee appeared outside the hospital to handle the Najadi murder

Najadi has claimed that his father had attempted to make a police report and to notify the banking authorities about the mysterious billion dollar payments that had entered Najib’s account at his former bank shortly before his assasination.

He also says that Shafee had mysteriously appeared at the scene as his father’s body was transferred to hospital and had aggressively taken over the handling of affairs, including a swift burial before he could reach his father’s side. He has asked if the two matters might be connected and who paid Shafee to turn up at the mortuary to take control?

Malaysians have been left to digest Shafee’s own explanation of events and the fact he has admitted now to lying in public about the whole affair. In the end they will have to see how he fares in court.