Standing Up For Sarawak?

False patriotism, so the saying goes, “is the last refuge of the scoundrel”. The point being that when the newly re-branded former BN leaders of Sarawak start trying to promote themselves as the noble defenders of Sarawakian autonomy and to wear the cloak of the Sarawak for Sarawakian movement, people should be suspicious.

Where were these BN leaders for the past 60 years whilst opposition folk pointed out the state was being sucked dry thanks to an illegal petroleum agreement signed by Taib Mahmud’s uncle and Najib Razak’s dad, whilst Taib himself orchestrated the affair as federal resources minister?

That agreement was never ratified by the Sarawak State Assembly as it ought to have been, meaning that Taib’s subsequent administration and all the flunkeys that supported it, who have now scurried over to GPS, betrayed their people for decades by handing over all the oil wealth for nothing in return.

However, now they appear to think they can come back posing as great nationalist heroes, which is how their expensively commissioned PR companies seek to position them for victory in the next state elections!

Weary Sarawak voters can expect to witness months of posturing along these lines as those well paid image folk come up with different ways for this army of political leeches to claim that they are ‘standing up for the people of Sarawak against the federal government’. Simply, they noticed that grass roots activists were getting support from people fed up with BN/GPS and their sell-out of Sarawak, so they have decided to try and steal the cloak and wear it. 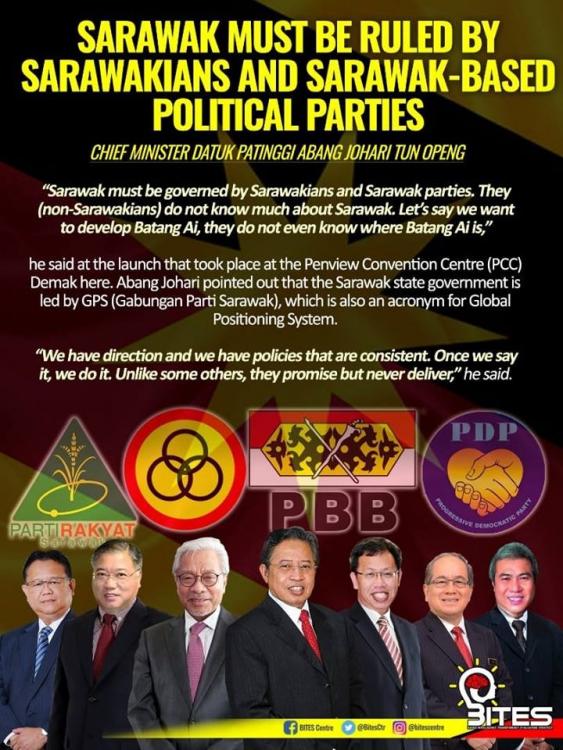 Do people still believe this line up of ex-BN datuks as they set up their new ‘positioning system’?

The problem is that we can all see what they are doing and the facts speak for themselves.

Betraying their own people

The manner in which Sarawak’s BN leadership all scurried over to form a new coalition with a different name when Najib imploded in the federal elections tells you all you need to know about selfish opportunism. These politicians are not about standing up for a cause let alone their people, they are about serving themselves.

No one denies that the people of Sarawak have suffered greatly over half a century whilst the wealth of their lands were at the same time cashed in to release billions of dollars.  No one denies that over those decades the money went not to education, infrastructure, hospitals or homes, but rather vanished from the scene. The people were left with no progress and development and their sources of food and materials, the forest and rivers, had been destroyed.

This has not worried any of the present GPS folk until the day BN lost the election. None of those politicians complained or stood up and demanded a better deal, except for a brief while Adenan Satem, who was soon slapped down on the matter by Najib.  The reason was clear, in that the few Sarawak leaders who were privileged to do BN’s work and run the politics of the state were rewarded very well indeed.

First class travel, kids in western schools, endless shopping, properties, silly cars and parties – these were the rewards of BN/GPS leaders who were prepared to abandon their own people to poverty and ruin.  The same people who are now hiring expensive PR firms to ‘re-position their images’ as champions of their native communities ready to make false confrontations with the central government.

Will Sarawakians be taken in and adopt these same old greedy datuks as the new champions of the revolution?

According to the information leaking out from the global Sarawak repositioning teams, the view is that if these desperate ex-BN leaders throw everything at the situation (by which these well-paid global and West Malaysian advisors naturally mean money) they may manage to save their politicial skins, even if they bankrupt the state in the process.

Locals from Sarawak, who are not being paid to give advice, might see it differently. However, the plan is for the present Chief Minister to throw all the money available in the state coffers at ‘projects’ to keep local communities happy between now and the state election, whilst at the same time lecturing the same communities that they are standing up for them at last against ‘oppressive central government’.

They may bankrupt the state in the process, but what matters to Governor Taib Mahmud and these same old cronies formerly of BN if that they keep control of power. That way they keep their ill gotten gains of the next 50 years and they get to argue with the PH government over the remaining oil in Sarawak territory.

After all, as his pre-election moves made clear, Taib hopes to scrap his own flawed treaty of 1974 (now that the arrangement no longer suits him) and to challenge West Malaysia’s rights through the courts.  If he can gull the people of Sarawak to buy all this posturing as some kind of belated nationalist ferver on the part of the greedy old despot and his BN/GPS hangers on, then he hope he can soon stick  a straw into the oil wells lying beneath the state and suck out the wealth into his off-shore accounts.

After all, Sarawak Report demonstrated only a short while back just what a facade all this Sarawak oil posturing has been by then BN. The so-called state initiative to promote the  supposedly state owned company Petros turned out to be a mere facade to provide South Sea Energy, a company owned by the allegedly senile Taib himself and his long-term cronies from the ex-timber conglomerate Rimbunan Hijau, access to the oil.

The re-positioning of BN/GPS is to blame federal Malaysia for all Sarawak’s ills just as a reforming government comes into office.  However, in many ways it is a variation on the same game that Taib Mahmud has always sought to play, using the nationalist sentiment of his own people to benefit himself.

For decades he postured that he was keeping UMNO out of the state, whilst doing UMNO’s work for it at every turn as its arch collaborator.  Now he and his ex-BN bigwigs hope to position GPS as the party which is keeping reforming parties like PKR and DAP out of the state by branding them ‘West Malaysian’, whilst at the same time attempting to play ball with the same ruling PH coalition by abandoning BN.

The plan is the same as it has been for decades under Taib, which is to do the work of the central government in return for permission to continue to rob their own people blind. whilst pretending to represent them against the same federal government.

That is why false patriotism is indeed the last refuge of the scoundrel and the people of Sarawak must seek out a lesser evil than those traitors from among them.