The clear up operation has spread far and wide over 1MDB, yet in several areas it is taking a great deal of time, with connected companies changing their management, status and ownership in the meantime.

The British based headquarters of 1MDB’s first alleged joint venture partner PetroSaudi International, for example, appears to have achieved virtual mothball status according to the latest company accounts, despite having been touted as a major international petroleum concern not so long back by 1MDB’s management.

The last employed director resigned in January to be replaced by a City lawyer, whose practice is based in the Strand. At the same time the swanky office address in Curzon Street, Mayfair, where KL based journalists had been entertained to impress them about the company’s wealth clout, also closed last week. PetroSaudi’s London contact address is now that of the lawyer employed to be the sole director.

The latest accounts, submitted in October of last year, nonetheless indicate that the company remained a going concern and maintained an average of 14 employees during the previous year, primarily managing the business and employement side of the international group of affiliate companies (most of which are off-shore entitities).

Where these are now accommodated after the latest upheaval is unclear.  Sarawak Report is yet to receive a reply from the original Chief Operating Officer/Chairman, British businessman Rick Haythornthwaite (also the Chairman of Mastercard) as to whether he still holds a post.

Hanging over PetroSaudi (described as a “risk” and “going concern” in the October filing) has been an ongoing dispute with Venezuela’s state petroleum company, which was the main client of PetroSaudi’s drill ship operation into which most of the 1MDB investment had gone.

The drill ships have been standing idle for over a year as the Venezuelan government has refused to pay on the contract owing to alleged negligence and non-performance of the ships, which crews abandoned claiming they were too clapped out and dangerous for human habitation.  An arbitration was due in December on the matter and Sarawak Report has asked PetroSaudi’s new director if there is news on a judgement. He did not immediately reply.

Venezuelan prosecutors have separately lodged a major fraud case relating to this and other matters involving the country’s former Minister for Petroleum, whereas PetroSaudi sued in the UK successfully to get payment on a promised $130 million Letter of Credit that Venezuela had disputed under the circumstances.

Meanwhile, an affiliated concern in London, PetroSaudi Energy and Trading, went into liquidation in November after several notices of overdue accounts, on the instructions of a meeting chaired by its sole director, the UK citizen Patrick Mahony.

Mahony, a close friend of the Saudi owner Tarek Obaid, was one of the key figures managing the entire 1MDB joint venture, having offered in one email he wrote in 2009 to the fund’s advisor Jho Low to allow PetroSaudi to be used ‘as a front’, as later appears to have been the case with the UBG takeover in Sarawak using 1MDB’s stolen money.

All in all, it looks as if PetroSaudi’s operations have come largely to a halt therefore, although a considerable chunk of 1MDB’s missing money has reverted through that Letter of Credit to the company’s shareholder Tarek Obaid, who is currently being probed in Switzerland together with Mahony (PSI’s former Investment Officer) over a litany of alleged serious crimes, including fraud, money laundering and the false imprisonment of their former colleague and 1MDB whistleblower Xavier Justo.

There has been even more evolution and change over in the United States relating to further company closely connected to another key figure in the 1MDB scandal, this time the Vegas based nightclub and entertainment group Hakkasan.  The fast expanding company was owned by the Emirati businessman Khadem al-Qubaisi (known as ‘KAQ’) at the time he received hundreds of millions in backhanders from 1MDB in return for allowing his sovereign wealth fund IPIC and its subsidiary Aabar to act as a second ‘front’ for billion dollar thefts from 1MDB, again orchestrated by Jho Low.

Hakkasan is likewise registered in the UK with the original shareholder cited as a private Abu Dhabi company called Tasameem Real Estate Company Limited, which US court filings revealed to be 90% owned in turn by KAQ and the remainder by a relative.

The former manager of the group Neil Moffitt, appointed in 2014, was also a UK citizen and over saw the rapid global expansion of the chain in the wake of the hundreds of millions that poured from 1MDB into KAQ’s private Luxembourg bank account in the name of VASCO Trust.

Moffitt also fronted the purchase of a number of properties in the US on behalf of KAQ (including Beverley Hills mansions and a major New York penthouse), which were later confiscated by the US authorities under money laundering regulations, having been determined to have been funded by those 1MDB bribes to KAQ.

However, Moffitt and the Hakkasan management angrily rejected concerns raised by Sarawak Report that any of the tainted 1MDB cash might also have found their way into the separate Tasameem accounts to fund Hakkasan’s subsequent extraordinary acquisition spree that had turned it into America’s largest hospitality concerns in a matter of months and projected Moffitt’s profile as a top media mogul.

In statements to the media Hakkasan said the group was ‘ring-fenced’ from 1MDB, despite registering an injection of $566 million in shareholder loans during the aftermath of Khadem’s receipt of bribes.

Instead, Tasameem referred to a $20 million loan provided by the IPIC Abu Dhabi sovereign wealth fund subsidiary Aabar as being a key source of of funding for the Hakkasan group at that time.  The group provided no comment on banking information obtained by Sarawak Report that showed at least one payment of $10 million had however been made from the tainted VASCO trust account to Tasameem Real Estate Limited, the owner of Hakkasan.

Nor did it comment on the name change of an off-shore entity owned by KAQ from VASCO Strategic Services to Tasameem Strategic Fund during the same period.

Nevertheless, those exposes over 1MDB were followed by a number of management and ownership shake-ups at Hakkasan as well.  KAQ stood down as Chairman of the group a year after being arrested and later held prisoner in Abu Dhabi over the thefts at 1MDB.

Moffitt also stepped down from the company, after staying on as manager and director for some months following KAQ’s departure. He and other former Aabar officials, who had simulataneously worked on KAQ’s private ventures (eg US citizens Chad Tappendorf and James Sullivan) were replaced as directors by a new team of individuals led by Emirati relatives of KAQ.  In late 2016 the Tasameem itself was replaced as shareholder by a new Abu Dhabi company.

KAQ’s original disgrace, it is worth remembering, came almost immediately after photographs showing his lewd nightclub habits were revealed on Sarawak Report, months before the full extent of his scandalous involvement in the 1MDB thefts was understood.

The apparent reason was that the Emirati royal family, operate an extreme disapproval of such activities and drinking, gambling and exposed flesh, all of which of course, are hallmarks of the Vegas-based Hakkasan: 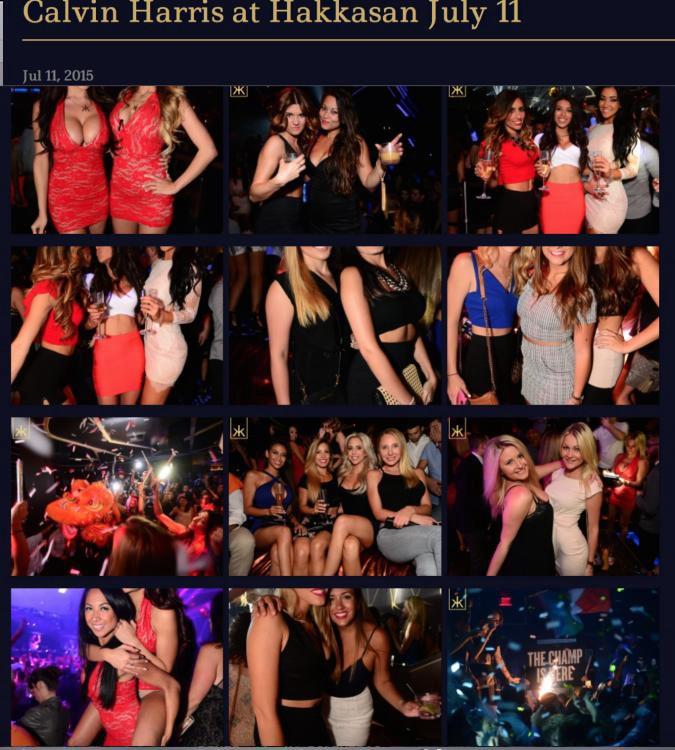 All of which makes the latest developments in the management and ownership of the club, as evidenced in recent filings more noteworthy and surprising.

During the past months various plans for projected sales of the Hakkasan were floated, including a proposed merger with another major Vegas group SBE.  None of these in the end eventuated.

Instead, Hakkasan’s most recent filings produced at the end of last year provided a surprising piece of news in that a new owner has emerged in the form of none other than Aabar itself, the subsidiary of the sovereign wealth fund IPIC of which KAQ had been chairman, a position he had allegedly abused to assist in siphoning off billions from 1MDB. 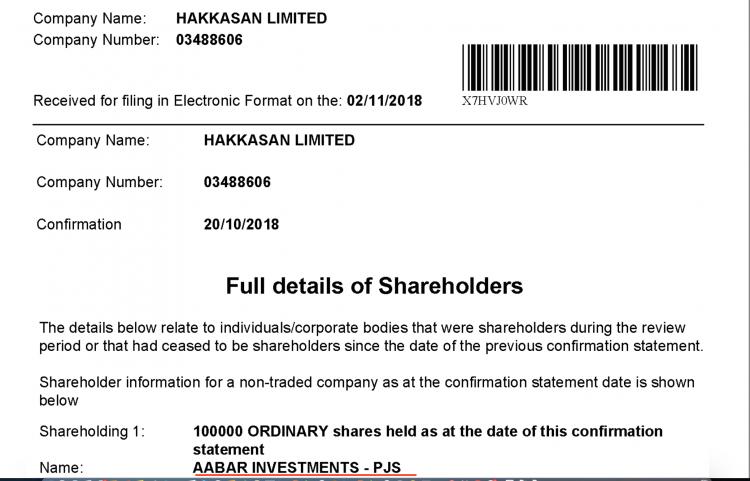 Hakkasan’s new owner is none other than Aabar

As Sarawak Report has revealed in previous reports, Aabar also functioned as a handy co-investor in a number of enterprises together with KAQ’s private companies, in what appeared to be a blatant conflict of interest, given his role as chairman and also CEO of its parent concern the wealth fund IPIC.

IPIC is now suing 1MDB (and indeed Goldman Sachs) for involving the fund in the 1MDB scandal by participating in the bribery of KAQ.

How this major sovereign wealth fund, which has now been absorbed by Abu Dhabi’s flagship fund Mubadala equates its new ownership of a brash Vegas-based casino and nightclub chain with those strict principles of propriety would be intriguing to discover.