Money (Stolen Money) Must Not Place Culprits Above The Law - Comment

Malaysians have over the past few hours been treated to a disgraceful display of mutual finger pointing and denial by the entities and individuals most culpable over 1MDB, as they seek to blame each other and get off the hook. It must not be allowed.

Both ex-PM Najib and his top bankers Goldman Sachs made hundreds of millions out of the thefts, but we are now being forced to witness their unbelievable attempts to seek scapegoats and avoid prosecution.

First up, the CEO of Goldman, who has launched his public pushback against the slew of cases, both civil and criminal, that have stacked up against the bank in New York and Kuala Lumpur.  He didn’t mince his words in citing the corruption of 1MDB and in particular its political boss Najib as being the responsible party during an ‘apology’ made ‘to the Malaysian people':

“It’s very clear that the people of Malaysia were defrauded by many individuals, including the highest members of the prior government,” [Malaysiakini]

This damning allegation by the head of the bank, which in the process acknowledges the fraud, lays the blame right at the door of their key client, who was both finance minister and prime minister and the sole signatory of 1MDB.

But, of course, Malaysia’s self-deluded and undeniably slippery ex-PM was right back on the case, despite the last shred of his cock and bull story about no money being stolen having just fallen away.  Off he went to the media with his own statement that Goldman should take responsibility for failing to protect 1MDB’s interests.

Whilst Malaysians were trying to digest that outrageous piece of cheek, Najib and his legal team took the matter to a whole new level, with an application to the court the very same afternoon to delay his trial for multiple thefts of public money ……. indefinitely!

Everyone knows that the trial of Najib and the zipping of his mouth is already long overdue.  The date was delayed well beyond reasonable limits, thanks to orchestrated hanky panky just after the election by his pet Chief Justice, who was still in position at the time.

However, players like Najib are used to the big stakes – outrageous demands, huge rewards, get out of jail cards all round.  This is the life he has lived, unlike the rest of us who are expected to abide by the normal principles of the law.

And in the same category of Najib, of course, are the world’s top bankers, those ‘Masters of the Universe’, who can cause havoc for the rest of us but expect to fly away from the scene of the catastrophe in their private jets unscathed i.e. the highest members of Goldman Sachs.

At the same time that he was apologising to those at the epicentre of Goldman’s latest shenanigans (following on from the likes of Libya, Greece and a swathe who lost their shirts during the last global financial crash) the new CEO David Solomon was moving to put the boot into those two of his relatively minor employees, on whom the bank plans to put the entire blame for the multi-billion dollar misappropriation.

It almost makes one feel sorry for ‘Dr’ Tim Leissner, the slick party-boy head of Goldman’s Southeast Asia division, who acted as the key conduit for Jho Low over 1MDB (in return for admitted kickbacks of a hundred million dollars).  Leissner’s sidekick, Roger Ng, who languishes in custody in KL subject to an extradition request from the US, is the other scapegoat being used by Goldman.

A major piece in today’s New York Times lays bare Goldman’s tactics placing the entire blame for the bank’s appalling negligence and criminal actions over 1MDB on these two employees. 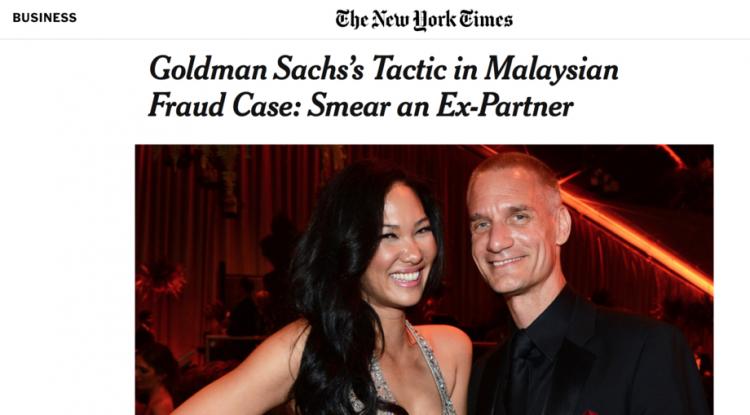 “They sound like the ingredients of a pulpy thriller: Bigamy. Secret religious conversions. A doctorate from a mail-order diploma mill. Affairs with powerful women.
The sordid list — a mixture of facts, accusations and insinuations, packaged in a glossy slide show — represents the crux of a well-orchestrated campaign by Goldman Sachs to discredit one of its former partners and to minimize the Wall Street bank’s role in the looting of a big Malaysian investment fund.
In recent presentations to American regulators and law enforcement authorities, according to people familiar with their contents, Goldman executives and their lawyers have depicted Tim Leissner, a former top investment banker, as a master con man, someone so sneaky that even the retired military intelligence officers who work for the bank couldn’t sniff him out.
The scorched-earth tactics, especially against someone who had been a star banker, reflect just how worried Goldman is about the criminal investigations into its role in the theft of at least $2.7 billion from the 1Malaysia Development Berhad, or 1MDB, sovereign wealth fund.” [More in New York Times]

The problem is that you didn’t need to listen to all this after the event villification by Goldman Sachs to know something was wrong years ago with the bank’s bond deals with 1MDB and the record of its top Asia man, as any reader of Sarawak Report and the resulting publicity across Asia and the world can testify.

Goldman Sachs were receiving red light warnings from as early as 2013 that things were wrong, warnings that accelerated and magnified as the whole 1MDB scandal exploded in this blog from early 2015.

The moment Sarawak Report laid hands on one of the secretive power purchase bond deals in July 2013 we reported that there was clear evidence of fraud not least in the outrageous commissions that were charged. However, the Goldman hierachy and due dilligence teams, indeed the very top bosses, must have had access and indeed scrutinised all that documentation already.

CEO David Solomon may be trashing Tim Leissner’s bogus qualifications now, claiming that he was an arch deceptor, who even gulled the military intelligence men hired to check staff, however Sarawak Report – as a total outsider in the affair – was able to detect the none too subtle fact that a Phd from the University of Somerset was bogus, because no one has heard of the University of Somerset – it does not exist as a regulated institution.

Despite our publishing this glaring fact, it did not emerge until well into 2016 that Leissner had been put on leave and then sacked for improprieties that were at first said by the bank to have nothing to do with 1MDB.

What is clear is that the attraction of Leissner to Goldman Sachs was his access to some of Asia’s most corrupt politicians with whom the bank proved willing to do business. The present indictment by US prosecutors cites a culture at the bank that allowed Leissner to get around the facade of compliance structures in pushing through deals like 1MDB.

What’s more the same prosecutors say that Leissner in his plea deal has named others at the bank (his immediate boss Andrew Vella has already been put on leave) who helped and colluded with him over stealing money from 1MDB and bribing foreign officials in the process.

However, what ultimately damns Goldman Sachs’ handling of this whole affair was the bank’s failure to admit, take action or speak out about its failings over 1MDB until the moment that the Malaysian people took the matter into their own hands and ejected Najib Razak on May 9th last year.

Till that moment there were no admissions and no apologies from the bank. No reviews of the 1MDB bond deals, no further lay-offs, nothing. By that point the bank had to know, because the whole of Malaysia knew, that huge sums had gone missing from its bond deals, from which every senior Goldman executive had personally made fat bonuses. However, the bank did precisely nothing to address or admit the problem.

The reason was that Goldman Sachs had calculated like every other ‘expert’ on Malaysia that Najib would win GE14. There would never be enough popular power or sufficient popular anger to turf him out was the conventional wisdom and the bank banked on that, wrongly.

If Najib had won GE14 then of course Malaysia would continue today to be arguing that there was no money missing from 1MDB and no wrongdoing whatsoever and Goldman Sachs would doubtless have continued to keep quiet on the whole affair.

Critics would have been put to jail for spreading false news; Sarawak Report would have been ruined by a slew of fake libel cases spawned in the UK by inventive lawyers and who knows, maybe Tim Leissner might have been given his job back?

Najib and Goldman reckoned without Malaysian unity against corruption and now both the ex-PM and the entire bank, which is now being criminally prosecuted by the new Malaysian Attorney General and sued by Malaysia for US$7.5 billion in lost funds, should face the justice they deserve.