Developing crop diversity is not a threat to Malaysia’s oil palm industry. Rather it could be a vital saviour, one of the world’s top crop scientists based in KL has been explaining to the country’s leading politicians, who appear to be listening.

Professor Sayed Azam-Ali heads the prestigious Crops For the Future Research Centre (CFFRC) supported by the Malaysian Government together with Nottingham University, which is fast becoming one of the world’s most highly regarded research centres in terms of meeting future challenges for global food security. 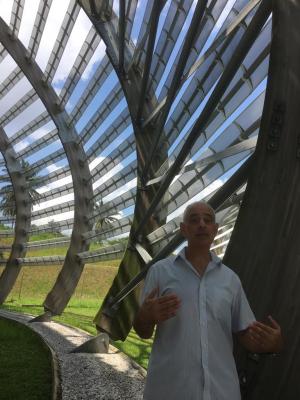 Progressive building designed to save energy

The four year old facility, housed in three futuristic `domes’ designed around eco-friendly principles to cut energy waste, is now one of Malaysia’s leading research centres thanks to the level of innovative research that is emanating from its staff and research students. Its research also ranks alongside leading global agricultural research centres

However, CFFRC, which was visited by Sarawak Report earlier this week, is about to issue what it describes as an urgent Call For Action, in order to prevent what is described as a ‘perfect storm’ that could see a collapse in the ability of the world’s human population to grow sufficient food to feed itself in an era of climate change.

By 2030, the centre says, the world will have to produce 50% more food and 30% more fresh water, just at a time when temperatures are rising causing the world’s mainstream crops to fail.

Guiding visitors round the facility which is the only centre in the world dedicated solely to underutilised crops through every stage of the value chain from production through to retail and consumption, Sayed makes no hesitation in stating what he says is a bald scientific fact.

If global temperatures rise by the 1.5%, which the overwhelming majority of scientists presently predict will happen, barring urgent measures (some say in the very near future), then the climate in Malaysia will become increasingly challenging for its most abundant crop, oil palm.

Therefore, it is not the bio-fuel restrictions currently being imposed by European markets which present the biggest threat to Malaysia’s staple crop, it’s global warming – a problem that many in Malaysia have yet to come to terms with.

The CFFRC Call For Action, due to be released soon, is not about casting blame however.  Rather, it sets out what the centre believes are genuine workable solutions, which Professor Sayed says he has been laying out to Ministers including Prime Minister Dr Mahathir, whom he briefed within days of the last election.

“It was less than two weeks following the election and I received this message to please go to meet the new PM. When I went to see him he expressed enormous interest in pioneering agricultural innovations on the ground in Malaysia as soon as possible” Sayed told listeners including Sarawak Report.”

Among key findings the centre has started to produce is that by introducing some of the world’s traditional, but currently neglected and ‘underutilised’ crops into the spaces around and under palm plantations it is possible to regenerate the fertlity and productivity of the soil to help the oil palms to also thrive and generate new income opportunities through diversification beyond monocultures.

Many of these crops also do the job of improving soil health and reducing the need for fertilisers and tilling the earth, which is also a cause of major carbon release into the atmosphere.

As he leads visitors around the centre’s experimental crop nurseries created out of abandoned palm oil plantation land, Professor Sayed explains that many such ‘old fashioned’ species, such as bambara groundnut, have almost been lost to human knowledge in recent generations in favour of major mass agriculture crops worldwide.

However, these plants tend to be much hardier and therefore able to grow in exhausted earth and to refertilise it naturally. They also supply vital aspects of the human diet like plant proteins and vitamins, which have been neglected in Malaysia in favour of too much fast food over recent years, causing obesity and even a rise in stunted growth and mental development in otherwise well fed children.

The phenomenon of ‘hidden hunger’ is now causing major health concerns among urban populations like KL, which more diversified crops can work to solve.

For smallholders in particular, the centre has found that diversifying towards such underutilised crops alongside the oil palm plantations can provide more income than competing.

Two of the crops researched and developed by the institute, Moringa and Bambara Groundnut, have recently been numbered among the top five ‘Super Foods’ of the future in a well publicised WWF report. 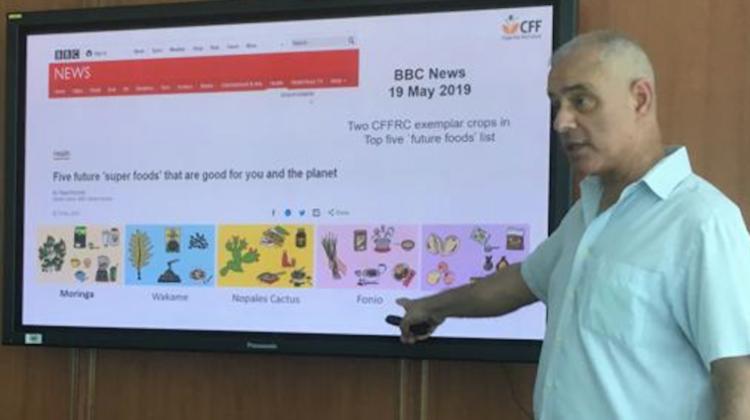 Not only do these plants prove they can grow in areas where palm oil plantations have become exhausted, they can also regenerate the soil without the need for expensive and polluting artificial fertilisers.

“These plants add value and fill in the spaces under and around the existing oil palms. Presently this space in Malaysia – unused agricultural land around plantations – occupies 27% of the total palm plantation area, amounting to 1.2 million hectares. That is the same area as the entire land mass of the Netherlands, which is the second biggest agriculture exporter in the world after the United States.  So that goes to show how much more we could do with our present agricultural space if we attend to more efficient management and varied crops” says Sayed.

Primary Industries Minister Teresa Kok is also interested. Sayed says he has met with and briefed her and discussed diversification opportunities in plantations with her team.

Another key message produced by this Malaysia based crop research is that the greater variety of crops and diversifying large regions of monoculture effectively helps to counter the spread of diseases, which can take a dangerous grip over vast, single species plantations.

Sayed points out the danger. Presently just four top cash crops account for 60% of the world’s total food consumption, whereas 7,000 other ‘underutilised’ traditional crops from across the world are in danger of being driven out of existence by mass agricultural practices, even though they present better prospects for survival if temperatures continue to rise.

Save Palm Oil By Saving Forests

One of the most dramatic messages that visitors are taking away with them, says Sayed, is that one of the key measures Malaysia can take to protect the future of oil palm plantations from rising temperatures is not only to mix them with other crops but to reduce pressure on the remaining rainforests across the country by growing underutilised crops on land that is no longer suitable for mainstream agriculture.

Rising temperatures are caused by rising carbon dioxide levels and fast growing tropical rainforests eat carbon out of the air faster than any other process on the planet. Previous logging has released carbon into the atmosphere and at the same time reduced the number of trees to absorb the gas.

On the other hand, if these areas are protected and left free to grow back undisturbed they will suck millions of tons of carbon back from the air, helping to keep temperatures below that perilous level of a rise of 1.5%C, which all scientists agree will cause global devastation – and damage palm oil plantations in warm countries like Malaysia.

Many Malaysians are also uninformed that the remaining South East Asian rainforests are not only the oldest in the world (Borneo is 150 million years old) but are also the most biodiverse regions of the planet.

Once again, by preserving that biodiversity Malaysia can benefit from the advantages of its unparalleled variety of species when it comes to the challenges of adapting to changing conditions on the planet.

CFFRC has one of the most high tech experimental laboratories in the region for measuring the impact of CO2 on the plants we eat. 18 separate controlled-environment chambers can test exactly how increasing carbon dioxide levels affect the nutritional content of crops.

This is significant because the levels of CO2 on earth have doubled since the inception of the industrial revolution, says Professor Sayed:

“It is now clear that higher CO2 levels cause a reduction in key micro-nutritional content in plants – zinc levels for example go down when CO2 goes up and that is a seriou risk to human health if we don’t have a diverse diet”.

Opportunity Not To Miss?

With the above facts established, it is worth bearing in mind that a programme to regenerate Malaysia’s forests (as opposed to continuing with more relentless logging) could potentially raise billions of dollars in carbon capture off-set money paid by global industries and other countries.

In the meantime, Malaysia’s forest regeneration could also provide the single most effective means of cooling down the region to protect oil palm plantations.  As can a host of complementary crops that could help extend the life of the valued cash crop by returning minerals and breaking down impacted soils without having to till the earth and release yet more gases in the process.

It is all about thinking smart and using resources more thoughtfully to find solutions to problems mankind created.

Thanks to CFF, Malaysia is at the forefront of the search for scientific solutions, but it is up to the new government and the industry itself to seize the opportunity to implement them before the effects of climate change produce that ‘perfect storm’. 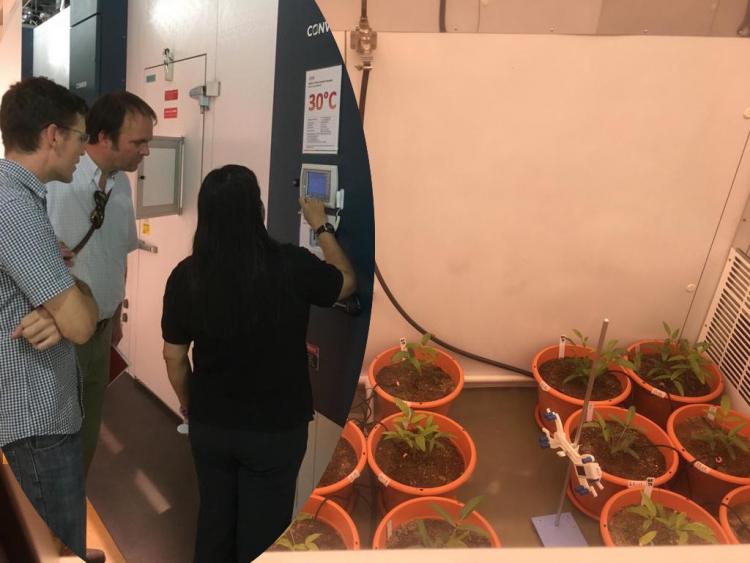