A group of Malaysians based in KL and also the UK have turned sleuths over the past 24 hours to flush out what they believe have been misleading comments made by Brexit Party leaders, who have sought to imply they are not receiving anonymous foreign donations.

It is impermissible for UK parties to receive donations from foreign entities, certainly for sums over £500 which have to be reported to the UK Electoral Commission. The rules are less clear regarding lesser donations as these do not need to be reported (unless large donations have been divided up).

Defending his party’s practises, Mr Farage said: “We make it very clear, we only want your money if you’re on the UK electoral roll.”
“We’re looking for irregularities, if we see things that have come from overseas, we simply send it back,” he said. [BBC News]

Yet, it has been exposed in the past few hours that all anyone needs to do to donate up to the £501.00 (around RM2,500) non-reported limit to the Brexit Party is click a button on the party website that leads directly to a PayPal platform, open to account holders all over the world via just their email and a password.

It has also emerged that Farage recently privately courted wealthy donors known to be close to Putin and Donald Trump at an event at London’s Ritz Hotel.

Critics point out that this direct path to PayPal leaves the way open for anonymous and unvetted donations that could originate from anywhere and any currency in the world. They say this leaves the system wide open to abuse and also the danger of repeated illegal foreign donations, which might disguise large single donors operating from anywhere across the globe, who ought to have been reported.

Unlike other UK political parties, the Brexit Party (which claims to be more democratic but is actually a limited company owned by the populist MEP Nigel Farage) does not require any such donor to give prior information about their identity, nationality or address to provide basic safeguards against money laundering, before directing them to the PayPal site. 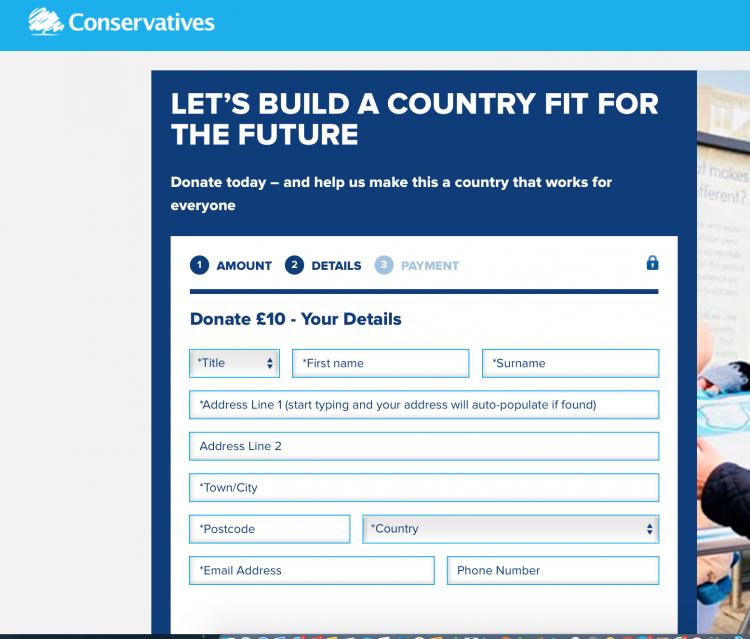 By contrast, Conservative and Labour donation platforms demand extensive information in advance about their proposed donors

It means that individuals or other entities can give money completely anonymously to the Brexit Party using potentially fake email addresses that can be linked via PayPal to any bank account anywhere in the world, with only the password holder and PayPal itself aware of the identity of that account. 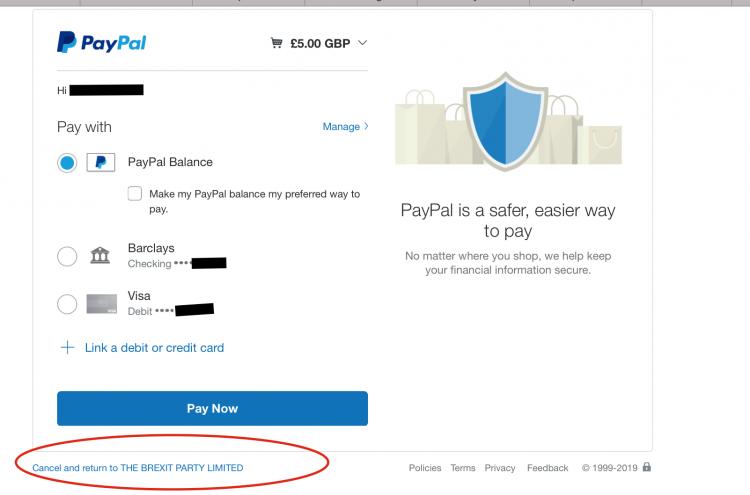 Nevertheless, when challenged by journalists yesterday about the lack of safeguards senior Brexit Party figures sought to imply that the party has not been taking foreign donations or donations given in foreign currencies.

Questioned by the BBC, party leader Nigel Farage (presently paid as a member of the European Parliament) again seemed to make clear the Brexit Party only takes UK based donations:

When asked if the party took donations in foreign currency, Mr Farage replied: “Absolutely not, we only take sterling – end of conversation.” [BBC report]

Likewise, the Brexit Party chairman Richard Tice when asked by the BBC’s Today programme if he could confirm whether the party takes cash from foreign citizens said:

“I don’t sit in front of the PayPal account all day so I don’t know what currencies people are paying in, but, as I understand it, the PayPal takes it in sterling.”

Foreign Cash Is RECEIVED In Sterling – That’s How PayPal Works!

However, prompted by Sarawak Report, a number of Malaysian citizens have now proved both men wrong.

Malaysians living in the both the UK and in Malaysia with PayPal accounts registered in ringgit and attached to Malaysian bank accounts, have all found themselves able to make donations to the Brexit Party with ease.

For example, earlier today (the day after Farage and Tice made their claims) a Malaysian teacher, who wishes to be called Karen, explained her experiment to see if she could donate to Brexit, whilst living and working as a lifelong Malaysian citizen in KL.

“I went to the Brexit Party website and clicked on the banner at the top that says ‘Donate’ and it takes you straight to a PayPal page. You can choose the amount so I chose £5.00 (RM25). When you click ‘donate’ next you are sent to your PayPal account. So, I signed into my PayPal account that is connectted to my Malaysian CIMB ringgit bank account and I then put in my Malaysian debit card information to top it up, as I did not have any money in the PayPal account at the time.”

The Malaysian school teacher went on to confirm that her billing address on the account is her Malaysian address and that she is a Malaysian citizen and lives and works in Kuala Lumpur:

“I don’t have a permanent residence or anything like that in Britain” she confirmed to Sarawak Report.

After completing the transaction the Malaysian teacher received a confirmation from the PayPal account that she had paid £5.00 sterling into the Brexit Party. 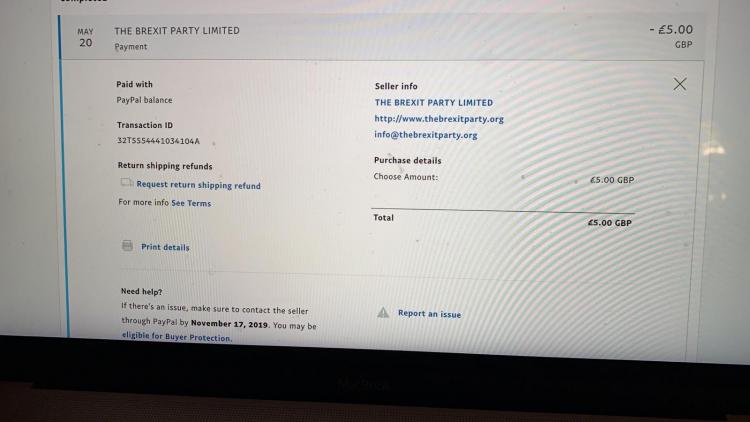 She also received a confirmation from the Brexit Party they had received her £5.00 donation: 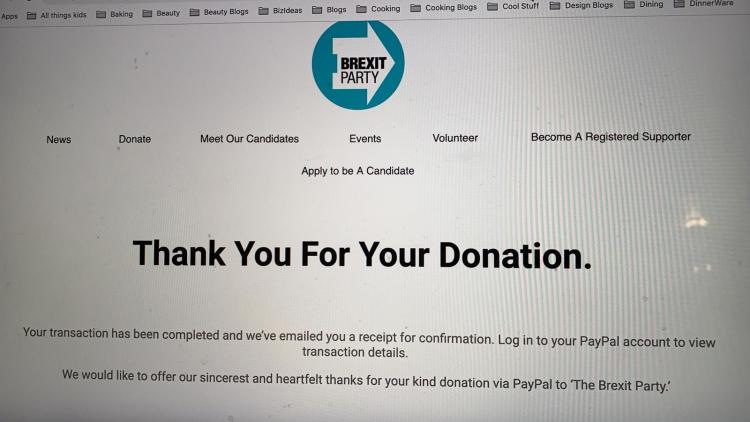 Confirmation from the Brexit Party

It was at that point the teacher also received a confirmation text from her Malaysian bank on her mobile phone, confirming that the amount had been paid to the Brexit Party out of her CIMB account.

Tellingly, the amount had been removed in ringgit however – a total of RM28.78 to include transfer fees and currency conversion charges. 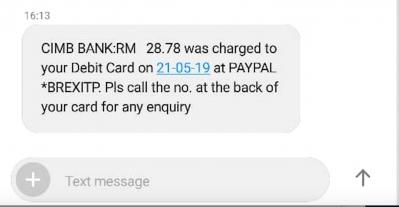 Text confirmation from her bank that the equivalent of £5.00 sterling plus charges had been removed in ringgit from her account

The transaction confirms that although the Brexit Party leaders are claiming they only receive money in sterling, thereby appearing to give the impression their donors are all UK citizens with sterling accounts, money can in fact be sent by any nationality, in any currency, from anywhere in the world without any check on the identity of the sender thanks to the system of payment they have adopted.

“I Could Be A ‘Bot’ Making Multiple Payments”

Karen says the exercise has convinced her that the claims by the Brexit leaders were misleading.

“I think at the end of the day it doesn’t matter if the money comes into the account in sterling because PayPal converts the money into sterling if they [The Brexit Party] have a British bank account.  I think the issue is that foreign citizens can donate money at all.  The issue of whether they are receiving donations in pounds that is a deflection. With PayPal you can recieve money from anywhere in your prefered currency.
“There was no questionnaire before I made my donation to check if I was a British citizen or an automated account making the donation. So anyone can make a donation and could even use the same account to send multiple transactions. There is nothing to stop the same person donating repeatedly from the same account.”

Sarawak Report also spoke to another Malaysian citizen presently living in the UK, who likewise was able to transfer a donation made from her Maybank ringgit account via a PayPal account she had set up in Singapore. Her PayPal details make quite clear that she is a Malaysian national: 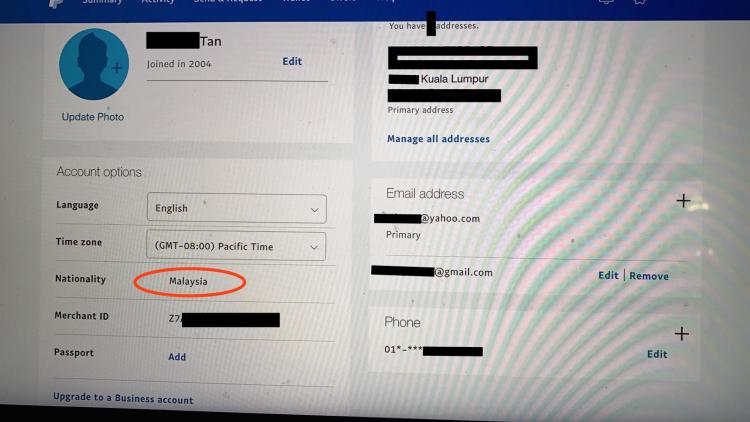 The donor’s PayPal account registers her as a foreign national from Malaysia, yet it processed the donation to the Brexit Party in the UK

The findings of these Malaysians over just the past few hours mirrors evidence from other people around the world, who passed their findings to Sarawak Report showing payments made in Hong Kong dollars, Swiss Francs and US dollars: 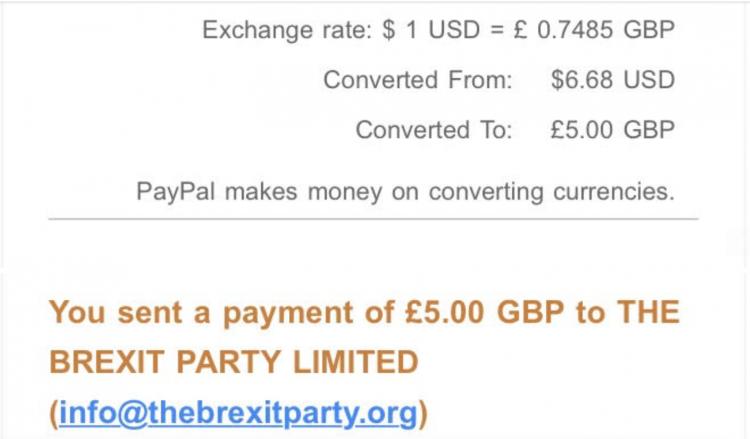 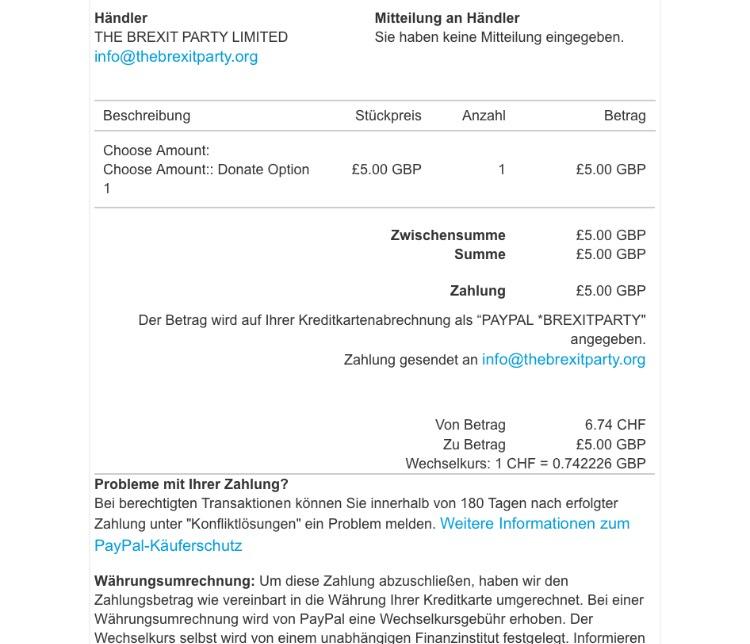 Another donation sent in Swiss Francs but received in Pounds Sterling 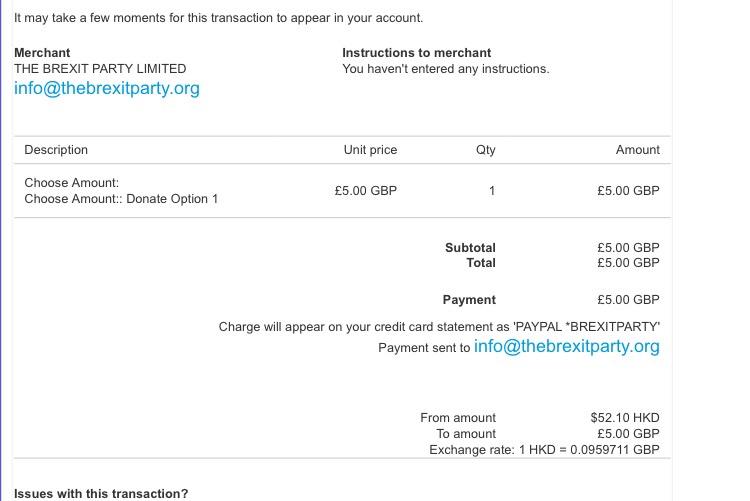 Register And Pay £25 To Be A ‘Registered Supporter’?

The same team of Malaysian and other sleuths have made another discovery in the course of investigating donations to the Brexit Party.  Nigel Farage and his colleagues have also frequently boasted that they have been collected tens of thousands of effective party members/supporters in record time, claiming each of them have been signing up via the ‘Become a Registered Supporter’ section of the same online site, which they claim requires a £25 fee.

Visiting the Registered Supporter section does require would be members to provide the sort of details other parties would normally require of all donors, namely the UK addresses and identities of the aspirant members.

However, once these details have been entered and users click to proceed to the next stage, they have been surprised to receive a confirmation that they are already now registered as members of the party, without yet having been required to move on to the payment stage to surrender the apparently requisite £25.

This was the notice that Sarawak Report received when investigating the opportunity to become a member, without yet having been required to pay any money:

Having been confirmed as a Registered Supporter after providing UK resident details, SR decided not to bother to pay the £25 after all

The Brexit Party have boasted that they have collected the details of huge numbers of Registered Supporters who have all paid £25 to join up, thereby accounting for hundreds of thousands in alleged donations.

However, the research above tends to imply the potential for a serious mismatch, in that Registered Supporters who have provided their UK details do not appear to actually need to actually pay to join up to the party list (and indeed could at least in theory therefore have had their details entered from the phone book), whereas huge sums of unidentified money could simultaneously have been pouring in from anonymous foreign nationals in repeat payments via PayPal, that might in practice seem to be accounted for by those Registered Supporters.

Following complaints from a growing number of sources, not only into this matter but the fact that Mr Farage failed to declare nearly half a million pounds in payments and benefits from a British businessman with Russian ties, who is already under investigation by the National Crime Agency over previous donations to Farage’s Leave EU campaign, the UK Election Commission has announced it will be visiting the Brexit Party’s offices tomorrow, presumably to investigate these matters.

Reports have also been made to the EU Parliament complaining about Farage’s failure to declare the half million pounds spent on him by the businessman Arron Banks and tonight it has emerged that the EU too will be investigating those complaints.

Banks himself is on record glorying not in Farage’s democratic credentials, but in his authoritarian methods to control the party, which is actually constructed as a company he owns (including cash received):

Tonight, the Brexit Party led by Nigel Farage has retaliated, calling these investigations the product of ‘collusion’ between ‘The Establishment’ and ‘The Deep State’, whom he accuses of being ‘jealous of his success’ in raising huge sums in record time.

However, the Malaysians who carried out their investigations in KL believe they know better! 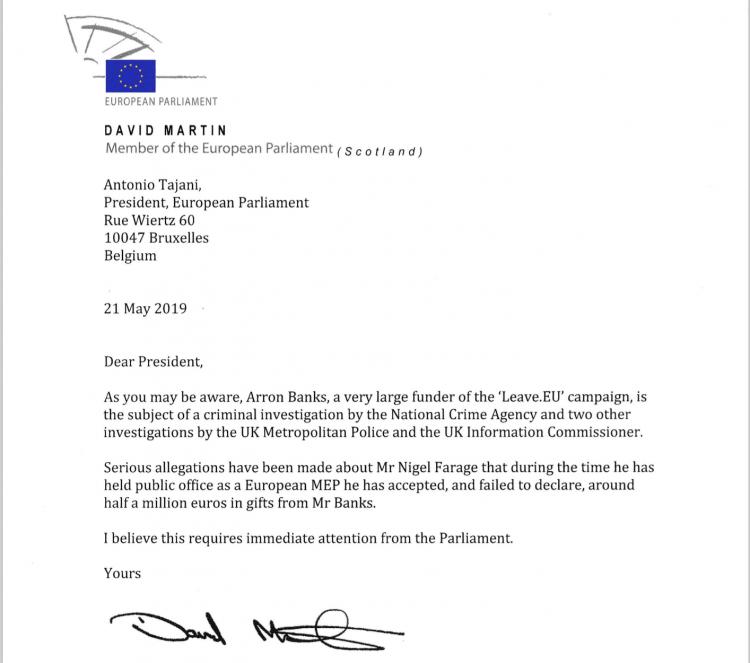