Readers of 1MDB-related coverage on Sarawak Report will have come across the name of Falcon Bank’s former chief executive Eduardo Leemann a number of times, relating to his bank’s connections to the scandal.

Now, according to press reports in Switzerland, the authorities there have finally opened proceedings against this former Goldman Sachs banker, who did a stint in Abu Dhabi before taking on the major role at the Aabar/IPIC owned Swiss based bank, which specialised in wealth management.

The Swiss Federal Prosecutor has opened criminal investigations against Eduardo Leeman, who maintains his innocence, say local media, however interestingly the subjects under investigation are described as specifically NOT being related to his role supervising the bank’s handling of hundreds of milllions that were diverted from 1MDB into prime minister Najib Razak’s private KL accounts.

Singapore trial notes and FBI investigation papers make clear that compliance sections and more junior officers at Falcon Bank had flagged up numerous concerns to bosses at their Zurich headquarters about these transfers, but had received the message from on high that the senior members of the Board (presumably the now imprisoned chairman of Aabar, Khadem al Qubaisi, and his deputy, Mohammad al Husseiney) wanted the transactions to be completed.

However, it is apparently OTHER activities that have got Eduardo into hot water not this.  No wonder clients have been complaining about frozen funds as investigators apparently examined the bank in total over the past several months on the proclaimed grounds of it being a potential criminal entity.

The specific statement that the investigations were NOT related to 1MDB interestingly mirrors official claims made in Abu Dhabi last month as a lengthy prison sentence was finally handed down against Khadem al Qubaisi (known as KAQ).  The authorities in the Emirate took pains to make clear to journalists seeking explanations about the trial that the punishment had nothing to do with his activities over 1MDB. It was about something else.

The sovereign wealth fund where KAQ formerly called the shots, IPIC (International Petroleum Investment Company) is presently locked in legal wrangles with Malaysia and 1MDB over who is to blame for the shenanigans over US$6.5 billion raised in bonds via Goldman Sachs, supposedly to be guaranteed by IPIC.

About half the money was immediately diverted 2012-2013, much of it into Falcon Bank and on to Najib (plus half a billion to KAQ himself).  The fact that those responsible are being imprisoned over something else, not this might be seen to assist the Abu Dhabi case that it cannot be blamed for the disgraceful mismanagement of the bonds and so is not liable.  Malaysia is likely to argue otherwise, given it wishes to avoid supposed payments for the guarantees and wants IPIC instead to contribute towards the refunding of the stolen money.

There have been other significant recent developments linked to former KAQ properties in the United States, also the subject of many exposes by Sarawak Report, in particular the multi-million dollar Hakkasan nightclub chain which rocketed to a number one ranking in Las Vegas within 18 months of a series of vast investments following 2013.

Earlier this year Aabar/IPIC took over full ownership and control of the controversial nightclub chain, having earlier been only listed as the provider of a relatively minor $20 million loan.

Prior to that KAQ and his brother were the 100% registered owners of the entertainment mecca (featuring gambling, boozing and louchly dressed revellers entertained by ‘superstar DJs’).  However, their company Tasameem Real Estate Company LLC had benefited from a mysterious US$566  ‘non share equity instrument’ donated from an anonymous ‘third party’ as a ‘shareholder loan’, according to its UK registered company accounts:

Did IPIC/Aabar connected interests have a deeper investment in Hakkasan?

The media were informed that the $20 million loan due in 2016 had come from Aabar, a relatively piffling amount. There was also a tale tell $10 million injection from the KAQ owned Vasco Trust at Edmund de Rosthchild Bank in Luxembourg, funded entirely by money stolen from 1MDB, according to information obtained by Sarawak Report.  However, so far no admission to the owner of the half billion dollar stake:

The acknowledged loan from Aabar was relatively piffling

After KAQ’s arrest the club was first passed to a separate Abu Dhabi company fronted by directors with clear links to KAQ, but subsequently it was reported the businessman had complained from jail that he was being scapegoated over 1MDB and forced to turn over all his assets.  Shortly after Aabar emerged as the new owner in Hakkasan’s latest London accounts.

Reflecting the announced ‘transfer of ownership’ to Aabar are a quartet of new directors on the board of Hakkasan linked to Aabar itself.  These include the person who signed off on those accounts, none other than the present head honcho back at Falcon Bank Matthew John Hurn: 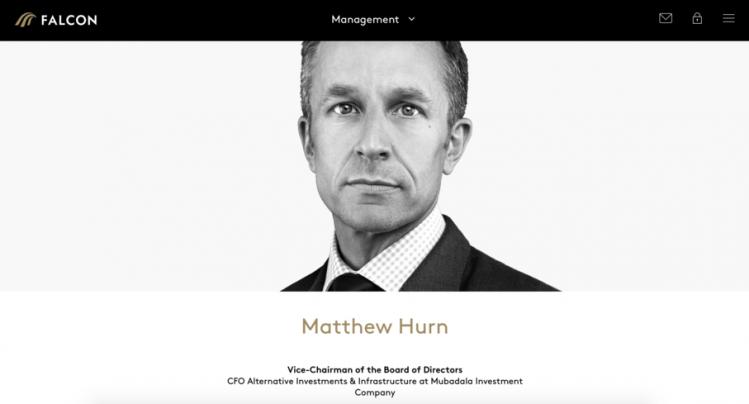 It seems fair to ask if the shareholder loan of over half a billion dollars had therefore originally come from entitities linked to Aabar and if so, why these were not more openly declared?  Aabar is now divesting much of Hakkasan’s Vegas assets, including a sale of 6 of its key venues in May this year to MGM.

Who exactly at Aabar was behind the loans to the racey nightclub empire, who authorised the half billion dollar injection, how much of the money can be traced to 1MDB and to whom KAQ was referring when he claimed he was being made a scapegoat by Abu Dhabi are all likely to become key areas of investigations for the Malaysian authorities as they press their case that the fund was conned and plundered by a circle of criminal entities that not only included Malaysia’s previous prime minister, but also an Abu Dhabi owned bank and fund managers, who claim they were made scapegoats by more powerful people also involved.

Meanwhile, America and Switzerland as well as Abu Dhabi appear content to limit the scope of their investigations to matters not related to 1MDB or to the ownership of Hakkasan.