More details on the mysterious hand outs of huge areas of the Sarawak land mass to the son of the former chief minister and present governor are coming to light as Sarawak Report reviews leaked documentation and public records. The MACC should take things further with a full investigation.

Sarawak Report has now identified at least 20 companies linked to Abu Bekir and his business partner Chris Chung which received at least 50 thousand hectares of land at nominal rates mainly in the period 2008-2010. 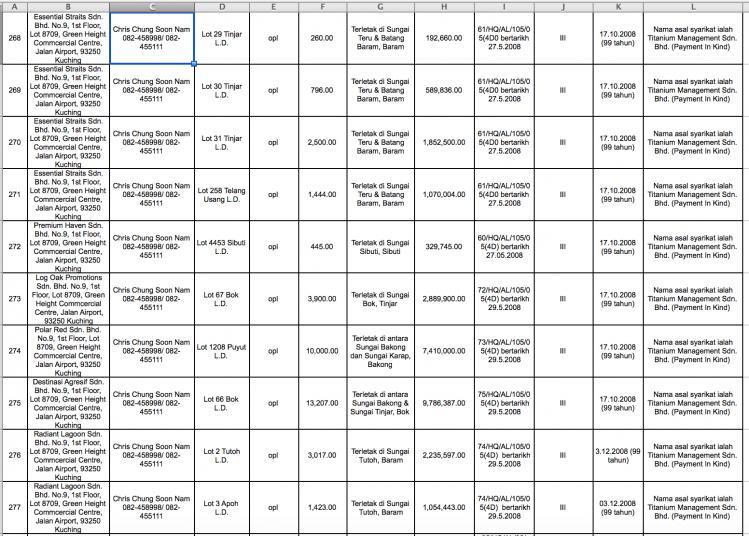 These long leases were provided at nominal pepper corn rates and listed as being ‘Payments in Kind’ in the Land Registry.  They were cited as being released for conversion into oil palm (therefore providing the opportunity for lucrative logging as part of the ‘biomass clearance’ implied in the concessions).  A further two thousand hectares of prime urban development land was also handed over in the same way.

Reports at the time suggested that these offers of land were made as part payment of a budget over-run by the CM’s son’s company, Titanium Management, on a huge series of bridge-building contracts offered by his father’s state government, which he failed to complete but nevertheless demanded almost double the original contract price for in payment.

Why the decision was made to offer all these contracts to this one rookie company that was 59% owned by Abu Bekir with Chung as the other main partner (plus a former director of public works, Michael Ting) ought surely to be explored, particularly in the light of the disappointing outcome.

The decision to then offer land in lieu of RM250 million allegedly outstanding on this payment to the value of what the opposition party DAP conservatively calculated as being worth at least a billion ringgit also merits scrutiny.

In short: how was the budget allowed to get so out of control? Why did the state agree to meet Titanium’s increased demands, despite the uncompleted contract? And why was a chunk of the excess payment made in valuable land concessions conservatively calculated as being worth at least four times in price?

Under the previous corrupted BN federal government, investigators tasked with examining the extraordinary and outrageous hand-outs of concessions and contracts to Taib’s family, of which this is just one example, concluded that an interpretation of legislation that requires ministers to absent themselves from voting on measures where they hold a personal interest meant law enforcers could not question these donations because Taib had left the room to allow his juniors to vote them through.

The reformed, post GE14 MACC ought to re-visit these extraordinary conclusions and pass details of the situation to the AG’s office for a better determination on that law!

Meanwhile, Sarawak Report has made some other observations that highlight further the extraordinary conflicts of interest and lack of due process involved in these hand-outs to Abu Bekir.  Take for example the case of the Radiant Lagoon concession involving a chunk of 4,5oo hectares of heavily wooded land bordering on the Mulu World Heritage Site.

Although the supposed ‘Payments in Kind’ were justified under the guise of a settlement with Titanium Management, 59% owned by Abu Bekir, Radiant Lagoon was in fact 99% owned by Abu Bekir.  Therefore, the alleged repayment was essentially being made to a different entity than the party the state allegedly owed money to with the money going straight into the son of the CM’s pocket.  How come?

There have in fact been numerous fluctuations of declared directorships and shareholdings over the years between these two men and Michale Ting, relating to the plethora of companies based at the so called Titanium Tower headquarters in Kuching, which bears all the hallmarks of a nominee arrangement. The reasons for these changes of declared ownerhip and the evidence of purchases and payments ought to be examined by the tax authorities at the very least.

Indeed, just this January Abu Bekir surrendered his shares and directorship of Titanium Management itself, handing apparent ownership over to the other two men. Already by 2018 he had apparently downsized his shareholding to a 50/50 arrangement with Chung, then in January Ting acquired Abu Bekir’s half as Taib’s son apparently exited from the scene altogether. Rich pickings for a former salaried director of public works! 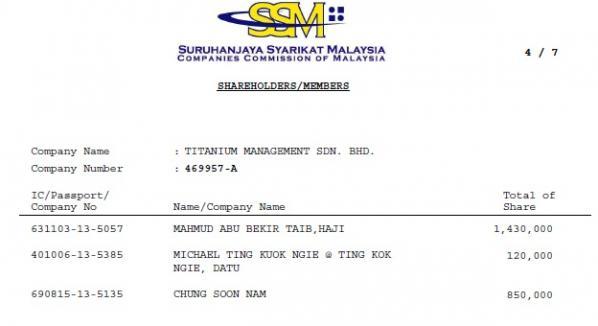 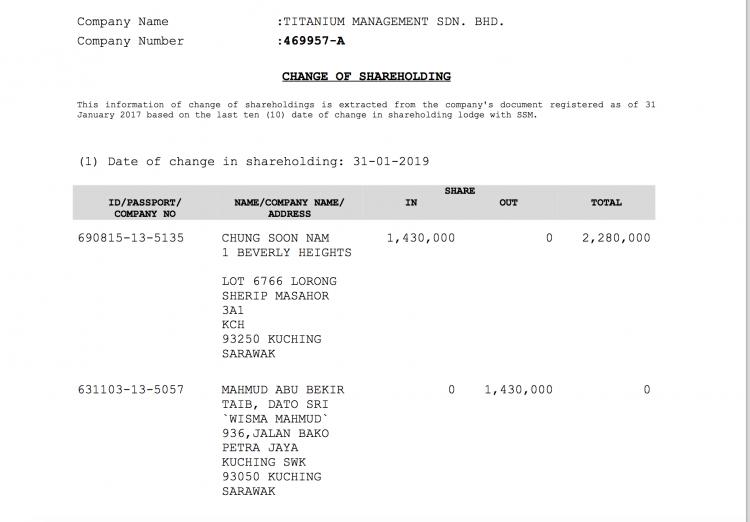 Another extraordinary feature of all these land deals with Abu Bekir is that in each case the plantation concessions were valued at a mere RM471 per hectare, no matter what the condition of the land or where it was.

How much work therefore did the state valuers put into considering the actual value of the land before they so eagerly signed it over to the then chief minister’s son at what was a plainly ludicrously undervalued uniform rate, especially given the precious hoards of uncut timber that were apparently not even counted in the deal?

Critics have further pointed out numerous other sweeteners and concessions offered to Abu Bekir relating to these concessions, including the lengthening of the leases beyond the normal period to give plenty of time for the CM’s son to deal with the enormous bounty.  After all, the state was also at the same time forcing other huge contracts and concessions on the over-burdened young man, who not only owns a chunck of the giant CMS but also controls Sarawak Cable (the recipient of all the cabling contracts from the state’s hydro-electric projects) and numerous other public construction projects as well as aviation and telecommunications contracts to touch on just a sample of the Taib family economic interests in the state.

Abu Bekir is now trying to pretend to the courts, who have insisted he pay maintainance to his former wife, that he is not the wealthy man she has made him out to be. In fact, he wants to pay her nothing at all and has so far succeeded in not shelling out a single ringgit.

The MACC have a duty not only to this abandoned lady, but also to the public of Sarawak to conduct a full and thorough investigation into Abu Bekir’s handouts from his father’s administration, before moving on to all the other myriad contracts and concessions offered to the rest of this octopus of a family that has illegally wrapped its tentacles around the Sarawak economy for decades.

Pretending like Najib’s former AG that investigations have been completed (in exactly 24 hours) and ‘there has been no wrong-doing’ is likely to bring the same result for all concerned as it did for Najib and his colleagues when it gets to the next election.