East Is East And West Is West

Sarawak feels left behind by progress and also the growing respect for human rights in wider Malaysia and this has become a problem for the new federal government, since one and a half years after taking office it still seems like business as before over in Sarawak.

Part of the problem lies of course with the fact that the state election did not take place alongside all the other state elections and GE14 last year.  It is due in 2021. That means the same old local Bosskus are still lording it up and filling their pockets, just as they have for the past half century.

Another 600,000 hectares, much of it forested land, is still earmarked to be converted to plantations – for which read yet timber extraction by well-connected fellows like the son of the Governor of the state.

Whilst over the water and indeed the border in Sabah the kleptocrats are being gradually brought to book, in Sarawak the Malaysia Anti Corruption Commission continues to sit gingerly on the fence, despite the protests by native land owners against the continuing encroachments on the World Heritage site of Mulu and elsewhere and despite constant police reports by opposition politicians demanding a review of corrupt practices. 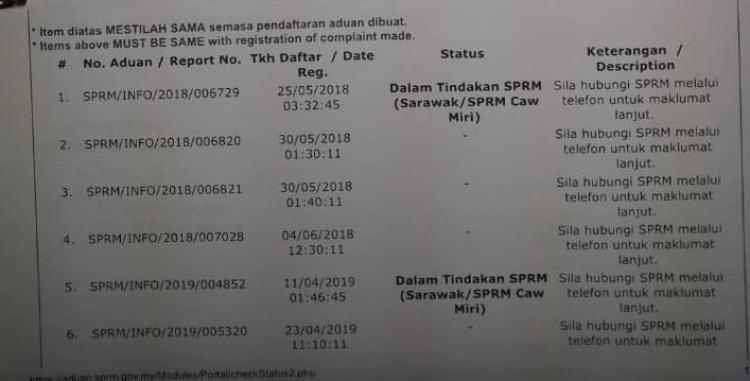 This weekend native campaigners over the Mulu case again demonstrated their frustration that no less than six complaints to the authorities have been ignored since the election over the payments of trivial sums by logging companies, passed through headmen to village folk, to justify the removal of their native land rights in Mulu; the clear cut stripping of the forest and conversion of the area to oil palm without so much as a by your leave.

It is just one case of many. Likewise, mortified local YBs have taken themselves to Putrajaya to meet today with the head of the MACC to demand to know why the fact that her predecessors refused to investigate blatant corruption issues is being used as an excuse to continue to do nothing in Sarawak?

By the same token, the case of 1MDB dismissed against Najib by AG Apandi would never have been re-opened.  The reason for the double standard is, of course, that the people of Sarawak have yet to hold their own elections and their ‘proudly independent’ and ‘Sarawak First’ sloganing MPs flipped sides to back the new federal government the moment the wind changed at Putrajaya.

The present PM may have a penchant for the power bestowed by a beckoning 2/3 majority, but the era of one party states is over in Malaysia and Sarawakians want to see a fair deal like everybody else.

For this reason also, it is simply not acceptable to Sarawak natives who lost their lands to timber plunder and quick cash cropping by those same plunderers in Sarawak to find themselves dragged in as supposed small holder victims by the defenders of big agri-business in Malaysia’s oil palm debate.

This weekend convincing data and a report was published confirming what everyone who knows and cares about the Sarawak people and their homeland already knew, which is that mega-monoculture plantations are responsible for large-scale deforestation in Sarawak, and the violations of the native customary rights.

The East Malaysian natives are not delighted, as portrayed by West Malaysian government champtions of the industry, says the grassroots environmental NGO SAM (Sahabat Alam Malaysia) to the contrary they are bereft and the profits have been grabbed by wealthy politicians, tycoons and urban shareholders – some revenue to the government maybe AFTER state buy outs have taken place, usually at scandalously inflated prices once again to the benefit of a few profiteering businessmen, bureaucrats and politicians.

Until the new West Malaysian government recognises that its responsibilities extend to the people of Sarawak as well as constituencies on the Peninsular confused Sarawakians will remain vulnerable to hopeless cries such as independence (with Taib in charge a fate worse than any) and confused by nonsense such as the false claims of ‘autonomy’ being bandied about by crooks who see autonomy only in terms of their personal immunity from the justice that applies to everybody else.

Kok was told that there can be no sustainable palm oil industry if native customary land rights (NCR) continue to be encroached by big plantations companies.

SAM president Meenakshi Raman said smallholders in the Peninsula under Felda was supported by NGOs with the understanding that there is no more expansion of these plantations in Malaysia.

“At least this is what we are told. In Sarawak, we are talking of the conflict of indigenous people’s land being taken away by big plantations, whether they are oil palm, pulp or paper companies,” Meenakshi said in a public forum with Iban activists in George Town, Penang today. [SMalaysiakni Sunday]