"End The Plunder!" - Anwar Speaks Out On Deforestation

PKR President, Anwar Ibrahim, today signalled he would be making firm demands when he visits Sarawak this weekend for the state to end further logging encroachments on native lands.

He had been asked about his sustainability agenda during a ‘Conversation About Nation Building’ hosted by the Asian Strategy & Leadership Institute at Sunway University on Thursday. Questioned on his response to present global recognition about the impact of climate change and growing concerns in Malaysia about pollution and the management of the natural environment he focused first on the issues of social justice.

“I remember being at a Dayak Kampung with the Ketua Kampung as the lorries were passing by with the huge timber and what do these people get? They get dust”.

Then, pointing out one of the hottest days ever was again being recorded over in London he continued that denial of climate change is not possible, but said that this and the policies of Europe and China should not be the main driving force of Malaysia’s policies on such matters but rather the welfare of the country’s own people and environment.

“Excessive timber concessions is an issue of plunder, stealing and harassment – it is stealing from local tribes and it has to be stopped. You have billionaire companies and these people only get a small compensation and it is done. What sort of governance are you talking about?”

The veteran politician, who made a joke about being called ‘leader in waiting’ saying after 21 years he was in no particular hurry, but that journalists would interpret that also as some kind of impatience, also complained that Orang Asli were suffering in the same way all over Malaysia.

“Even in the Islamic state of Kelantan the plundering continues. Under Islam it is an afront to religion and one cannot use ones power to grab the wealth of the land and condemn Orang Asli to poverty”

These were the excesses of the past he said and Malaysia needs to take a firm stand going forward. He then said that of course the matter was also about the environment and particularly the impact of logging and burning on peatlands in releasing greenhouse gases:

“It is not only about Europeans, the US and Chinese. We are talking about our own survival and the survival of humanity”.

His stance indicates a clear disapproval of continuing deforestation in Sarawak, which claims to have already licenced a further 600,000 hectares for plantations yet to be cleared. The federal government has called for a freeze, which so far the state has rejected. Several examples of continuing logging on peat areas are being identified by NGOs..

‘Habits of the Heart’

Anwar referred throughout to his theme of the ‘habits of the heart’ that he said defined all humanity and democratic ideas – values of universal justice, tolerance and compassion that he believed underpins his religion and could bring all people in the nation together.

He said he believed this would meet the challenge of the ‘Malay Muslim’ first agenda of a projected uniting of UMNO and PAS.  The latter party he said had demonstrated tendencies towards non-Malay based and “obsolete and truncated new conservative views” where religion can be abused to commit crimes.

“This is Malaysia, we are a democracy” he said and “how can you be a good Malay if you don’t care for the down-trodden Indian? It is about decency and habits of the heart” he added, as he was asked to describe his positioning on religion. 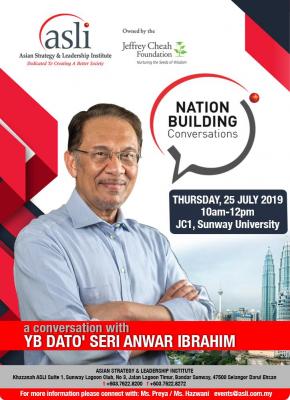 A key platform for the PKR agenda

Likewise, he said his experience in prison had given him some insights and sense of compassion towards immigration, which he said needed to be controlled but with empathy towards foreign workers who had given up everything to come and look for jobs in Malaysia, often only to be tricked by ruthless agents who too often escaped all punishment.

Many such Indonesians and Bangladeshis work on logging and plantations in places like Sarawak. If caught, such people should not be whipped he said, whilst their employers who had brought them in illegally went scott free.

“They lost everything. Don’t whip them”.

He said he remembered one boy who spent 6 months in jail on remand for stealing a pair of jeans, as he could afford no lawyer.

“Is the system just? No. We don’t cane the rich for plundering billions” he quipped “we make them Tan Sris and Datuks!”

There ought to be plenty to discuss this weekend in Sarawak.