More information about Jho Low’s plans for escaping international justice have come to light today with an exclusive scoop by the Cypriot newspaper Politis, which has discovered the fugitive obtained a secret Cypriot passport and even commissioned the construction of a grand 5 million euro mansion on the island.

According to the article, shortly after Sarawak Report broke the scandal over 1MDB in 2015 Jho Low appealed to the authorities of the Republic of Cyprus through Henley & Partners, which describes itself as “a global leader in citizenship and residence planning“. Following the procedures of the Cyprus Investment Plan, the paper says he then received a Republic of Cyprus passport.

In this difficult turning point of his business, Mr. Jho Low sought an alternative passport so that he could move internationally. The well-known company Henley & Partners specializing in international naturalization and home acquisition started contacts in Cyprus in late spring 2015 to secure a passport to its client.
It is very important to note that the date is not irrelevant. On March 10, 2015, the Malaysian Attorney General, by order of the country’s Cabinet of Ministers, conducted an inquiry into the financial accounts of the Malaysian development fund (1MDB Group) [translated – Politis Cyprus]

The paper also says that “Henley & Partners on September 23, 2015, acting on behalf of client Jho Low, also purchased an unfinished villa in Limnara in Ayia Napa for the sum of € 5 million”.

There is implicit criticism within the Politis article over the role of the citizenship broking activities of Henley & Partners, which was apparently only too happy to act as agent for the fugitive billionaire seeking a new passport and identity just at the time that his home country was investigating the fund he managed and the international media was picking up on the scandal of the missing billions. It has placed Jho Low at the centre of yet another controversy, namely that of “passports for sale”.

Henley & Partners also have ties to other passport touting island entities with controversial reputations in the field of governance, such as Malta where murdered journalist Daphne Caruana Galizia had been engaged in exposing what she regarded as a passport racket by ministers.

Indeed, as recorded by the UK Parliamentary enquiry into disinformation during elections, some have suggested that Henley & Partners go so far ast to actively support administrations who operate these controversial citizenship schemes for high worth individuals when it comes to election time.

The company SCL (parent to Cambridge Analytica) at the apparent behest of Henley & Partners has operated a number of campaigns to assist such governments to retain power in the face of opponents to passports for sale in what the UK parliamentary committee heard described as a “Faustian Pact” [pact with the Devil]:

Our Interim Report described the relationship between SCL Elections’ campaigning work and Christian Kalin, Chairman of Henley & Partners:
We were told that, behind much of SCL Elections’ campaigning work was the hidden hand of Christian Kalin, Chairman of Henley & Partners, who arranged for investors to supply the funding to pay for campaigns, and then organised SCL to write their manifesto and oversee the whole campaign process. In exchange, Alexander Nix told us, Henley & Partners would gain exclusive passport rights for that country, under a citizenship-by-investment (CBI) programme. Alexander Nix and Christian Kalin have been described as having a ‘Faustian pact’. With the exclusive passport rights came a government that would be conducive to Mr. Kalin and his clients. [UK Parliamentary Report into Disinformation and Fake News]

It would not have been hard to see from a Google search that Jho Low was a highly controversial and suspicious character who had fled his own country by this period of early 2015.

However, Henley & Partners (which the parliamentary report says have made tens of millions from the passport trade) nevertheless set about getting high-rolling Jho his papers via the Cyprus Investment Program (KEP), a ‘citizenship for investment’ programme that began in 2013.

Under KEP provisions, says the paper, the passport holder would have to deposit 5m euros in a Cypriot bank for 3 years and buy a permanent home of 500,000 euros.

Henley & Partners apparently applied to a well-known audit firm in Nicosia asking them to prepare the relevant applications. As part of the process they commissioned the due diligence team at Thomson Reuters to conduct research on the Malaysian businessman, who produced their report on June 2, 2015.

The due diligence appears not to have gone that well. Based on a ‘Risk Table’, which consisted of 14 chapters, Thompson Reuters identified a problem with Jho Low in 4 of the 14 chapters investigated:

The investigation showed a) that he has a problem as a politically exposed person b) that he is accused of money laundering c) that he is accused of fraud and violation of financial regulations and d) that there are a number of other risk factors (other risk factors).
All of this was recorded in a report that exceeded 100 pages. The Risk-based Thomson Reuters report had four ratings, namely green, yellow, orange and red. All four categories of Mr. Lowe’s found problems with orange and red. [Politis report] 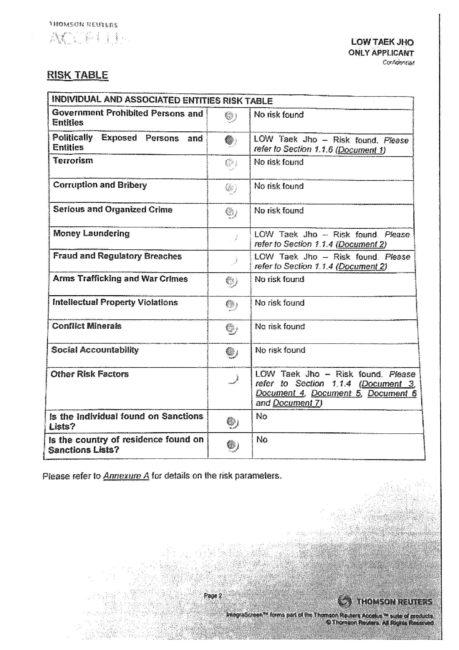 Under these circumstances, Politis asks “Why did Henley & Partners and its affiliates in Cyprus bring him to Cyprus for naturalization, and were any officials informed about him?”

The paper says that on the basis of information available to it the amount of EUR 5,960,000 was deposited with a Cypriot bank on June 24, 2015 . However, it points out that on the basis of the KEP, it should have passed through the control of the Central Bank, the Bank of Cyprus. Was this checked the paper asks?

Politis goes on to detail that Jho Low arrived in Cyprus on September 18, 2015 and, through a two-day express procedure, obtained his passport by the Council of Ministers. It was at the same time that Henley & Partners on September 23, 2015 purchased the villa, reportedly due to be completed and delivered within two months.

The paper fails to detail whether Jho Low ever returned to Cyprus, used the passport or stayed in the house. Neither do we at this point know whether any moves have yet been made to seize the valuable property.

However, Politis says it will be continuing its investigation over the coming days. Passport and citizenship mongers Henley & Partners did not comment to the Cypriot newspaper on the matter.