Over To The Swiss On 1MDB

Justice delayed is justice denied, particularly in a country like Switzerland which has plenty of funds to chase wealthy criminals.

However, prosecutors in this little haven for the world’s dirtiest rich folk are notoriously reluctant to probe their sources of wealth or indeed to tackle any of the banks who handle it.

A case initiated against the giant UBS in 2013 for laundering timber kickbacks to former Sabah Chief Minister Musa Aman (following exposes by this blog) continues to move at the speed of an Alpine glacier. Even Malaysia has got further with its charges and prosecution against this disgraced politician over the very same transactions.

Likewise, the crooks associated with 1MDB. Tarek Obaid was picked up in China on an alert put out by Saudi Arabia some 18 months ago, where the authorities have already had his pal and former partner in PetroSaudi, Prince Turki bin Abdullah, in the slammer for well over a year.

His Swiss passport and fairly credible claims that the imprisonment of MBS’s royal rivals were as much politically motivated as to do with their looting of state funds caused the Chinese to agree to let him go – Obaid has quivered in Switzerland ever since, a wreck no longer willing to travel by all reports.

It is time Obaid was forced to choose where to receive the justice coming to him – he will probably opt for the comforts of a Swiss rather than a Saudi institution. The Federal Prosecutor finally initiated a case against him and his British colleague and facilitator Patrick Mahony in May last year, however since then there has been little sign of action.

Certainly, the case has not stopped Obaid continuing to live it up on 1MDB’s stolen money frequenting the country’s 5 star hotels. And Mahony still freely divides his time between Gstaad, the UK and further ventures in ’emerging’ economies.

While the Swiss take their usual time over this case, a small industry of publicists and lawyers have been taking further fat 1MDB-funded pay checks from this refugee, who like Jho Low has been fighting the US Department of Justice’s asset seizures, as more glaring evidence has been piling up, including during the past days of testimony at the KL trial of 1MDB bossman, Najib Razak.

Whilst attempting to defend Najib, lawyer Shafee Abdullah (who appears to have the Rudi Giuliani touch) forced former 1MDB CEO Shahrol Halmi to admit last week that the PetroSaudi director had creamed a cool $85 million  paid to him by Jho Low’s Good Star Limited, which had secretly snatched $700 million from the billion allegedly invested in the joint venture with his firm:

Shafee: Within five days Tarek got paid US$85mil from Good Star.
Shahrol: Yes.
Shafee: So this Tarek Essam Obaid is the same Tarek Obaid (of PSI)?
Shahrol: As far as I know, yes.
Shafee: The money went to Good Star and Good Star paid Tarek.
Shahrol: I don’t know why.
[Shafee then showed the witness more documents and said they ought to “clear it out and settle it once and for all”. The document was a JP Morgan application form to open a bank account for an individual.]
Shafee: Please tell the court the name on the document.
Shahrol: It is Tarek Obaid.
Shafee: Based on bank statements, Tarek was paid US$85mil out of the US$700mil from Good Star for a commission as part of the JV deal between 1MDB and PSI.
Shahrol: Yes. The JV is the 1MDB-PSI deal.
Shafee: The reason Tarek was paid 85mil out of the 700 was because of commission.
Shahrol: Yes.
Shafee: So our money, US$700mil went there (to Good Star). US$85mil, this Tarek swiped as commission or purported commission… Can this be a bona fide commission or is this outright stealing?…

Shafee: You are an engineer. How much is the percentage?
Shahrol: Slightly over 10%.
Shafee: That’s a lot for a commission for a JV.
[The Star]

Sarawak Report has long been in a position to reveal there is more to the kickback story – Obaid plainly obtained an exact 15% of the 700 million stolen by Jho, because at almost the same time as the $85 million a separate $20 million was paid to him out of another of Jho Low’s covert accounts, this time operated by his friend Eric Tan in Singapore named Acme Time.

And the numbers continue to show a percentage based carve up by the conspirators because the man who did all the brainwork for Obaid on the PetroSaudi deal, the British deal maker Patrick Mahony, was then passed just shy of a third of the money directly from that payment into Obaid’s brand new JP Morgan account – a cool sum of $33 million which he used to buy a house in one of London’s fanciest areas: 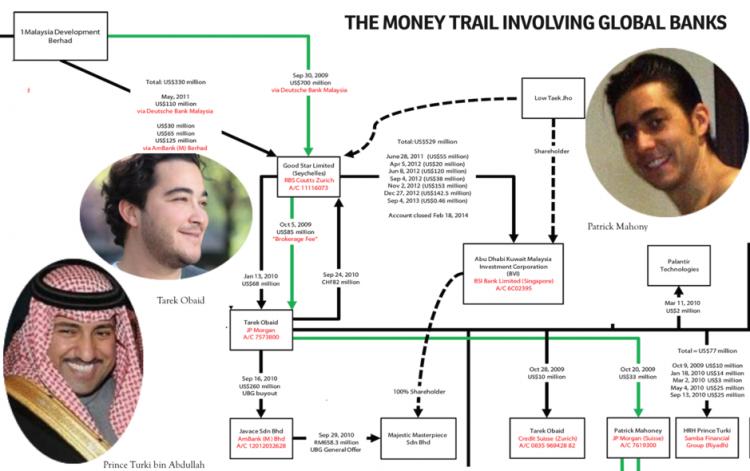 Obaid may try to pretend along with Patrick Mahony that he was a mere innocent in all this, merely earning a fabulous commission for receiving $300 million into his own joint venture, but that excuse which already stretches all credulity soon crashes under the burden of his subsequent actions and lies.

For a start, Obaid signed statements confirming that his company PetroSaudi owned Good Star (in order to try to help get Najib and Jho Low off the hook over the stolen $700m) when he knew that was not the case.

He then went on to pose as the beneficial owner of a bogus subsidiary company, PetroSaudi Seychelles, to act as the purchaser of the UBG group owned by the Taib family in Sarawak into which Jho Low had also invested. In fact the money for the deal was also stolen from 1MDB and funnelled through this front company to buy out the Taibs and Jho for a handsome profit.

Obaid also funnelled a fat chunk of the stolen money to his royal partner Prince Turki. $10 million of the first kickback from Good Star went to Turki and Obaid later forwarded the Prince the proceeds of another $68 million kickback from the same source in January the following year (see chart).

Doubtless in return for his continuing services in lying to help Jho Low, Tarek received yet another payment for a fat $43 in 2012 from a separate Jho Low/Eric Tan company named Alsen Chance, which came straight from the later money stolen from 1MDB’s so-called ‘power purchase’ bonds raised by Goldman Sachs through Abh Dhabi’s crooked Aabar sovereign fund.

Subsequent to these thefts and lies things got even darker, of course, as the further ventures and then cover-ups began.  Indeed, it seems ironic that it is still only their royal partner, Prince Turki, who has so far seen the inside of a jail owing to the Saudi actions that have nothing to do with 1MDB.

Not only did Obaid and Mahony proceed to embark on a fraudulent oil venture in Venezuela from 2010, bribing officials to agree to an outrageous drilling contract that was bringing them hundreds of thousands of dollars a day (even though the PetroSaudi drill ships were virtual scrap and barely functioned) but they continued to assist Najib and Jho Low to cover their crimes over 1MDB in ever more bizarre and unusual ways.

In 2012 when the 1MDB conspirators tried to conceal their stolen losses by setting up a bogus fund in the Cayman Islands it was PetroSaudi which took on the role of guaranteeing and underwriting the ‘investment’, providing their rust-bucket ships as the collateral for an alleged $1.4 billion dollar investment.

The Swiss BSI bank which also collaborated in the deception has long since gone under owing to this scandalous ‘Brazen Sky’ affair and bankers have been jailed.  However, thanks to nothing much going on in Switzerland, Obaid and Mahony still walk free.

This despite the fact that PetroSaudi’s next, even more outlandish, escapade involved a fiendish plot to imprison and extort false confessions from their former colleague turned whistleblower, Xavier Justo, in Thailand.  As most Malaysians now know, the PetroSaudi directors bribed Thai officials to arrest and imprison Justo and then allow a false confession to be drawn up under duress by a freelance ex-Scotland Yard policeman, himself hired by PetroSaudi and sent to Thailand to ‘fix’ Justo’s story.

PetroSaudi then mounted a massive PR operation to villify and incriminate Justo and Sarawak Report, claiming our true reporting on their thefts from 1MDB was a tissue of lies. Using Justo’s forced confession they nailed him with a three year sentence.  They also hired a UK former spy from GCHQ, Brian Lord, to lie to the media, saying that he had proven that Sarawak Report had forged data now proven to be entirely true. Lord was later convicted on harassment charges in a separate matter.

That is a very serious string of crimes and nearly all of them were listed in the dossier taken up by Swiss prosecutors when they lodged the case against these men in May 2018.

Yet, so far little movement in the case.

The impasse has allowed the PetroSaudi duo free to run down the company, which was never much more than a shell operation, and also to fight tooth and nail to hang on with the assets bought with their stolen money.

Just last month Tarek Obaid had his lawyers in court in the USA (paid with the stolen loot like everyone else) arguing against the seizure of valuable shares in the US company Palantir by the DOJ.  Obaid had followed a good tip off following his 1MDB ‘commission’ to invest in the Silicon Vally company (see chart) and bought $2 million dollars worth of early shares.

Sarawak Report has it on good authority that those shares are now worth over $70 million, so no wonder Obaid is desperate to hold on to them and willing to pour money into lawyers arguing on a technicality that the US has no jurisdiction to confiscate assets bought with stolen 1MDB money. The appeal has yet to be adjudicated.

In a separate case PetroSaudi’s shareholders managed to persuade a British Appeal Court to allow the payment of a $130 million Letter of Credit ‘owed’ by Venezuela thanks to the corrupt oil deal which had been contested by the Venezuelan government who have now charged the officials PetroSaudi bribed with fraud.

So, plainly these fellows reckoned there was all to play for…. until perhaps this week when Jho Low himself settled with the US authorities, leaving Obaid a solitary figure holding out against these seizures.

Xavier Justo may now be free, but he deserves justice and the people of Malaysia deserve their stolen money back from 1MDB. The Swiss ought to stop providing safe haven for Mr Obaid and his collaborators and get moving on this case.