Making Political Capital Out Of The Covid Crisis?

It is, of course, tempting for politicians, particularly those who lack a parliamentary mandate for their ministerial positions, to try to promote themselves. However, not at the expense of good practice, honest decency and public safety.

Likewise, attacking criticism when things are going badly as somehow unpatriotic or interfering or undermining of a ‘God-given’ new prime minister, as some propagandists have been doing, should be called out for the political profiteering that it is.

There has been rightful criticism, for example, of a number of dictates by ministers who only just grabbed their portfolios as the crisis descended, for making the situation worse not better.

Whilst in the UK a call went out for volunteers to help deliver goods to needy folk at home (over 700,000 have responded are are now helping in their neighbourhoods) in Malaysia the new government has banned volunteers from distributing vital supplies.

Instead, PN ministers have instructed volunteers to deposit goods with the Welfare Department, not least it would seem so that the government as opposed to the community can take the credit – if goods can be distributed safely in the UK then they can be distributed as safely in Malaysia.

PKR leader Anwar Ibrahim has pointed out the dangers of the government seeking to manage this huge community task all on its own, whilst the population is banned indoors: “Say, for example, one district has 10 officials, it is impossible to expect all 10 of them to handle the distribution for everyone in the area”, he today warned.

The suggestion that charity groups register with their local authorities to continue their aid work makes perfect sense and has been allowed in certain districts of Sarawak, where humane good sense has allowed stranded families in Lawas to receive much needed rice.

However, instead of focusing on improving poorly thought out blanket measures, it would seem these new ministers have had their minds on other more selfish matters. The disgraceful, self-promoting practice of splashing ministers’ photographs and promotional material on rice packets and provisions for the poor has come right back to the foreground in this crisis. 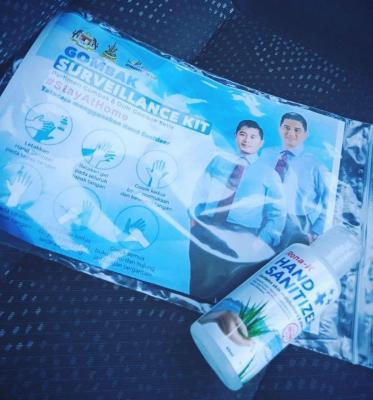 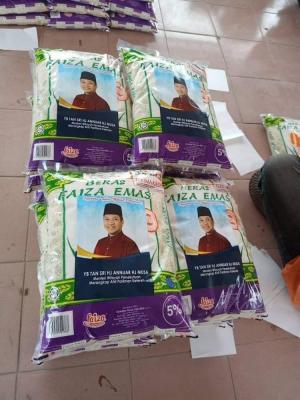 Rice courtesy of Annuar Musa – did he pay for it.. or the printing costs to promote his name?

Annuar Musa and Eddin Syazlee bin Shith on rice packets in Malaysia, whereas in Sarawak GPS has plastered its party logo on provisions also. 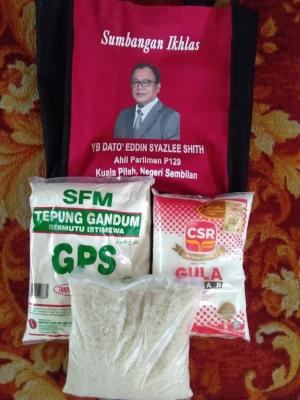 GPS and new UMNO Minister in the PMO, Eddie Syazlee Shith, take the opportunity to promote themselves

There have been plenty others up to the same game – a practice that would draw howls of condemnation in most democracies as an example of the most patronising possible treatment of constituents. 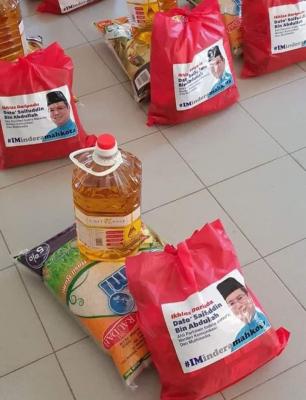 Saifuddin Abdullah – another hopping frog minister who was happy to join Azmin’s defection in return for his new unconfirmed media minister job (as printed on the rice packet so people can know!)

Did these politicians pay for the rice or provide these goods? Even if they had paid personally it would be disgracefully inappropriate to use such charity to make political capital out of a humanitarian crisis (where so many others have chosen to help or give voluntarily).

If on the other hand this is government-funded food or indeed provisions funded by the charity donations that have been encouraged from all sides, then the practice becomes downright deceitful and dishonest. 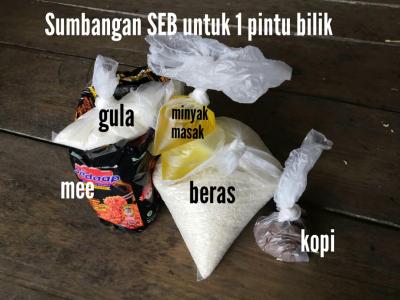 State corporations are at the same game? Sarawak’s SEB made a big play of its CSR generosity to help communities in need, but when it came to distribution the amounts have proven ‘peanuts’ per hungry family in Belaga…

Meanwhile, the government’s grandiose-sounding RM250 billion stimulus package is starting to look pretty lame in practice for struggling low income families out of work. It has now emerged that such families have been told to expect no distributions of cash before the end of April. Others are invited to take up the kind offer to raid their own pension plans to the tune of a bare minimum survival package of RM300 a month.

Again, Anwar has demanded the government “Expedite distribution of aid, set aside bureaucracy and prioritise the poor and needy in society” – handing out billions to businesses can surely wait instead? 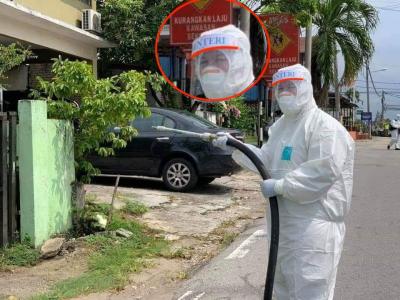 Minister to the rescue!

No doubt the prize for the worst example so far of this blatant self promotion has to go to one of the figures most responsible for the present chaos at the head of Malaysia’s unconfirmed coup government, Zuraida Kamaruddin, a key defector from PKR.

Social media has been treated over the past hours to enthusiastic footage of this Minister (in case people don’t recognise her she organised for a specially printed protection suit to be prepared with ‘Minister’ emblazoned on it) posturing with sanitation workers spraying allegedly ‘Covid 19 infected market stalls’. 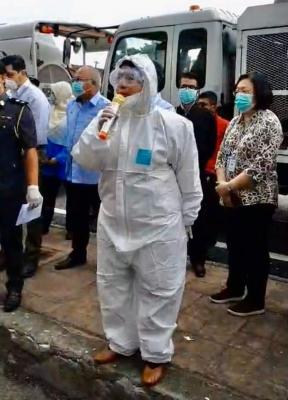 Better use of a suit and workers’ time?

Encasing herself in an ungainly full protection body suit for her photo-op Zuraida diverted expert man hours and materials for the stunt, which outraged medics have pointed out would have been better allocated to doctors treating Covid 19 patients in Malaysia’s hospitals, all presently suffering from lack of sufficient personal protective equipment (PPE).

Every time such ministers embark on stunts like these during these busy times, it is painfully obvious how many others are taken away from more useful actions that they could be doing…. and, in the case of Zuraida’s latest antics, apparently even put in the way of danger.

Because, while the minister had donned a full protective gear to head to the market stalls to spray away… crowded around her were a bevvy of young, comparatively unprotected junior workers, according to Zuraida’s own photo-material. 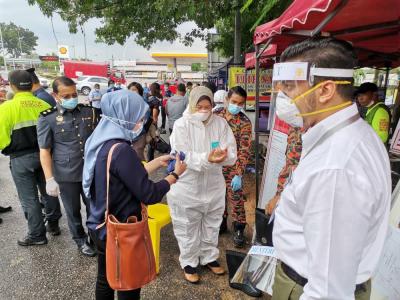 So, there can be only one message for these self-promoting, selfish and unconfirmed ‘ministers’, which is stay inside, self-isolate with the rest of us and try and do a better job by listening to the unintended consequences of your bad orders, which have caused poor people in particular mounds of misery.