MONSTROUS! - How Sarawak's GPS Have Played Politics With Hunger

as one local MP explained to Sarawak Report.

“That has amounted to around 3,000 families calling for hunger aid, but so far not one of them has been visited with food. On the other hand, we can see from social media and other sources that areas represented by GPS are receiving supplies. Our people are being left to starve!”

The enormity of the consequences of the cynical political games being played locally by the extremely wealthy Sarawak State Government, now part of the federal back-door ‘Coup Coalition’, started to reach crisis point over the weekend as families trapped by the MCO across the state have begun to cry out with hunger.

“The civil servants apologised” the same MP continued as he recounts how around the middle of last week all the state’s 82 Aduns had initially received a call from the Welfare Department to advise them that they would be receiving RM200,000 emergency aid relief for their area.

Although the money was advertised to be distributed according to the decisions of local disaster committees consisting of civil servants as well as the politicians, the Aduns were invited in that call to provide the banking details for their own service centres.

In the corrupt tradition of so many political handouts in Malaysia, that ensured in practice that the spending would be at the discretion of the Adun himself. Already supplies were thus being threatened.

However, two days later ‘opposition’ Aduns were to receive a second call apologising and explaining that in fact it would only be GPS supporting YBs who would get to control these substantial funds. In their case the money would be put under the control of a GPS representative in their area!  So much for the nation pulling together to face a crisis.

In Sibu, for example, Sarawak Report has learnt that the allocation for the city’s five seats (of which four belong to opposition parties) has all been placed under the control of the local Nangka Adun, Dr Annua bin Rap’ee, who is PBB (GPS). As of yet there has been no sight of resulting handouts for those in need in opposition areas, according to information received.

As distributions have apparently got underway in more favoured areas, the cries for help have become increasingly acute in the neglected regions. YB Jonikal Rayong, a member of PSB which has been critical of GPS, is another assemblyman who has reportedly been struggling to organise food parcels for stricken families in his area of Engkilili, in the absence of any state support so far.

“He has been told supplies will be on their way” was all that his local Lubok Antu MP Jugah Muyang was able to tell Sarawak Report. Meanwhile, stranded communities in lockdown are desperate.

Likewise, from Bintulu information is coming in of desperate longhouses who are cut off from communications and sealed off by the MCO and have no way of signalling their need for supplies.

Sarawak has long been used to the cynical manipulation of funds to favour ‘compliant’ voters. Tarmac is laid down in certain areas, whilst the roads of ‘disobedient’ citizens remain unfinished. Likewise, the disgraceful and corrupt practice of channelling funding directly through MPs has inevitably been treated as a tool for patronage and rewards.

PKR MP Michael Teo from Miri confirms such handouts to local Aduns is generally treated as ‘pocket money’ to be handed out via friends and political networks.  Too often only a fraction of the value of the grant reaches those in need in the form of goods:

“The State Government doesn’t have the will or resources to track all the statements. It is very difficult and there have been cases of false receipts. So it is up to the integrity and generosity of the individual Adun as to how much of this money he wants to give out and the people he is relying on as well. This sort of practice has carried on for many years”

The MP’s misgivings have been borne out by numerous accounts over the past few days that in areas where food packets have been parcelled out families have reported receiving a fraction of what was promised. In his case he has sought to help 5,000 slum families in Miri (mainly rural Ibans displaced by oil palm from their native lands) with his own funds in the absence of state government disaster money or distribution networks. 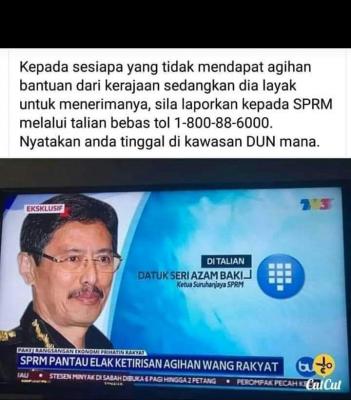 On Sunday the Sarawak DAP leader, YB Chong, finally issued a formal protest, accusing the state welfare minister of issuing misleading statements and signalling that unless official action takes place tomorrow his party is prepared to defy the MCO and to start distributing supplies itself to needy families starting Tuesday in Kuching:

Press Statement
The DAP Bandar Kuching and Stampin Service Centre have since 30-3-2020 till 3-4-2020, submitted the names and contacts of more than 3000 families who need supply and delivery of essential food items to the State Welfare Department.
On 1-4-2020, I have even personally met up with the Deputy Chief Minister, YB Douglas Uggah seeking his help for urgent action to be taken on this matter.
As at today (5-4-2020) at 1:00 p.m., we have checked with the applicants whose names we submitted on Monday, Tuesday and Wednesday. More than 95% of those we asked have not received any essential food items. The other 5% received some food assistance from church groups, NGOs or some from our DAP members as personal donations.
I am totally disappointed with the GPS State Government in this matter. If the State Government does not want to help, then don’t stop others from helping.
Yesterday, Minister of Welfare, Community Wellbeing, Women, Family and Childhood Development Dato Sri Fatimah Abdullah announced that a total of 444,329 households in all the 82 state constituencies across Sarawak have benefitted from the State Food Aid totalled RM16.4 million announced by Chief Minister Datuk Patinggi Abang Johari Tun Openg on March 29.
If one were to take an average of 5 persons in one household, 444,329 households would have involved 2.22 million persons. Sarawak only has a population of 3.2 million. That means 2 out 3 persons will have received some food aid from the state as stated by Fatimah. But that is not the case on the ground. At least, the 3000 plus households applying through the 2 DAP Service Centres did not receive anything from the State Food Aid from the State Welfare Department.
Did Fatimah over-state the figure or was it discrimination and persecution of those who have approached DAP service centres to ask for help?
As such, we will have to source for fund and essential food items to give out to those applicants and apply for police permits to allow our members and volunteers to deliver the food items.
Those who wish to donate to the fund for the purchase of food items for delivery may do so via the following bank account:
Account Name : Democratic Action Party Malaysia Kuching Branch
Account Number : 016 00 21140 1
Bank : Hong Leong Bank Berhad
We will start our delivery of the essential food to those applicants on Tuesday.
5-4-2020
Chong Chieng Jen
DAP Sarawak Chairman

Before attempts are made to denounce the DAP leader for alleged defiance or lack of unity in a crisis, the politicians responsible for this mess should remember the shaky ground on which their games of favouritism are based, while people starve.

The MCO directives were issued by a government (of which GPS forms a part) that has yet to test its legitimacy or majority, choosing to postpone the parliament instead. That means the draconian measures which this unconfirmed administration has been enforcing on the citizens of Malaysia have dubious legal status, compared to the measures taken in other countries where temporary emergency rules have been sanctioned properly (i.e. according to proper parliamentary procedures).

NGOs seeking to help starving citizens therefore face being locked up by a government that has not only failed to secure democratic authorisation for its measures, but has further, in the case of GPS, sought to profit politically by favouring its own minority parties against the supporters of the majority in Malaysia.

There is Plenty of Money, So Spend It!

To make it worse, Sarawak has all the money it needs to get its people through this crisis. Just weeks ago the GPS leadership boasted it has an ‘election war chest’ of RM30 billion – meaning that is the surplus of public money available to the state.

This is no time to be playing politics with the public’s money. GPS should be digging into that ‘war chest’ to tackle the crisis properly by funding hospitals and food. Instead, they have shown themselves willing to dole out pocket-money to favoured Aduns and leave people who didn’t vote for them to starve.

Malaysians have been patient in this crisis as a gaggle of unconfirmed and apparently uncommitted politicians have dithered between tackling their new jobs, celebrating their hijacked new positions and squabbling with each other. However, now that their botched and selfish plans are starting to starve the people they will find others will take a lead.