We know the ‘old ways’ are back when an announcement is made by the state news agency Bernama that ‘two company directors who are Datuks’ have been arrested by the anti-corruption commission over suspicions relating to a vast RM800 million road project in Sarawak, but no names are given.

By the end of yesterday the orange attired ‘senior businessmen Datuks’ had duly arrived in court to be remanded in custody and were surrounded and photographed by press photographers.

Everyone in the media knows who they are, but mysteriously the right to report arrests has seemingly been curtailed, keeping the public in the dark about these latest targets of the state.

The judge made no ruling demanding secrecy and several hints have now been circulated by the authorities themselves effectively confirming the identities of the influential Sarawak businessmen concerned.

Yet there has been an apparent warning not to name them and the Malaysian media has complied.  In published photographs their faces have been blanked out.

So, what is going on? Coy hints about the identity of these two gentlemen include information from the MACC and passed on through Bernama that the men were:

“…. arrested on suspicion of corruption as well as submitting false claims worth tens of millions of ringgit in connection with the implementation of 10 road upgrading projects under the defence ministry in Sarawak worth some RM800 million. [Free Malaysia Today]

Further hints passed out have been that the two directors, both aged 44, were partners who owned three companies that received (without open tender) the so-called ‘Projek Jiwa Murni’ road construction project in Sarawak, awarded by the Ministry of Defence from 2010 to 2016.

The work has come in far below standard, according to Bernama:

“Many complaints were received from the local community regarding the bad road conditions due to the quality of construction that did not meet the specifications,”

Well, par for the course. Sarawakians might say the same of most of the corrupt public projects completed in the state in recent decades.

Meanwhile, thanks to these heavy and unmistakable hints, those in the know have widely confirmed who the gentlemen in question are. The names flying around the WhatsApp circles of connected people are Datuk Chew Chiaw Han, a Director of Ibraco Berhad  and Datuk Barry Tan Chong Liang, a Director of Buildcon Sdn Bhd and Billion Trinity Sdn Bhd.

These are the men behind the project referred to and they answer the other descriptions. So, why can’t ordinary people be publicly informed as normal and why this violation of the open court system, which is specifically intended to prevent secretive arrests and trials?

More to the point, has Malaysia’s ‘free media’ become as intimidated as before under the flailing backdoor coalition headed by the two defectors who brought down their own elected government, Azmin Ali and ‘PM8’?

Not since the murderers of Altantuya were kept hooded at their trial has there been such a bizarre approach and once again it smacks of politics interfering in the process for reasons undisclosed. 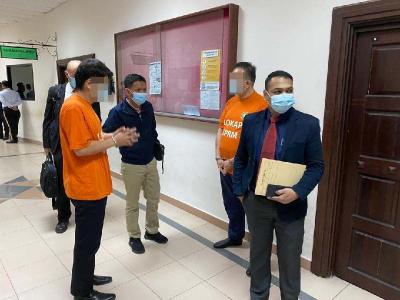 Fuzzed out faces and restricted reporting – what is behind the stage show?

Having identified the mystery Datuks, Sarawak Report has also enquired into what political circles have guessed could be the motives.

Both these contractors are prominent men, known to be cronies and beneficiaries of the Taib family business network in Sarawak. Indeed, Sarawak Report has reported on a number of controversies relating to their business dealings, including abuses of native rights, particularly in Tanjung Manis where Barry Tan (whose wife organised the Taib/Ragad wedding) has bulldozed native lands, snatched vast areas of valued timber and wreaked the mangrove region.

There have been further allegations of outrageous discounts on publicly owned land sold to a company controlled by Tan, resulting in grievous losses to the Trust Fund ASSAR (which has now been stripped of its assets meaning Sarawak’s poorest native families have lost even the meagre compensation they received for indigenous land grabs).

However, word is that the decision to strike against this lousy road project has nothing to do with concerns about corruption related to GPS but is targeted at a different ‘ally’ within the crumbling PN coalition of competing interests and rival leaders, namely the present leader of UMNO, Zahid Hamidi.

Zahid was the Minister of Defence at the time the ministry handed out the contracts in this case.  Moreover Zahid, who is famous for his penchant of flashing a seemingly endless collection of eye-waveringly expensive Swiss watches, is also known to be himself a particularly close ally and associate of Barry Tan. 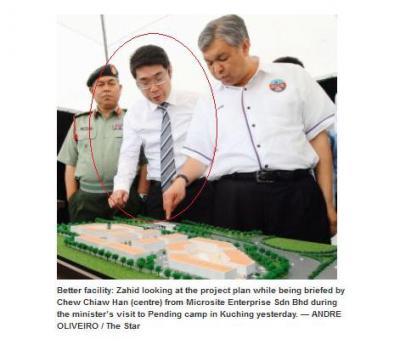 He even flew into Kuching during Chinese New Year to visit Barry Tan’s house and the businessman is known to have benefitted from advantageous swap deals relating to a series of other military sites in urban areas.

Tan’s colleague in the project and fellow detainee, Chew Chiaw Han, has also had close associations with the UMNO leader and was featured introducing him to the controversial road project (pictured right).

Zahid is, as all Malaysians know, also presently facing numerous corruption charges and looks set to be found guilty soon, just like his predecessor Najib Razak.

The informed view, therefore, is that those behind the MACC action are seeking to add pressure on Zahid himself. Those movers and shakers are further assumed to be ‘PM8 himself together with his sidekick Azmin Ali, newly installed as a Supreme Council member of the breakaway Bersatu faction in the PN coalition.

It is not hard to deduce why since this informed speculation comes at a time of escalating in-fighting between the Bersatu defectors whom the King appointed to lead the backdoor government and their fair-weather friends from UMNO and PAS who consider themselves rightfully more powerful within the coalition.

After all, the breakaway Bersatu faction commands hardly any MPs and has a dubious following in the country. Yet these two leaders are determined to dominate the two far larger parties and would clearly love to hijack UMNO altogether and be rid of its tainted leadership – although with a zero majority they can’t afford to lose the seats.

The result is a back-stabbing stalemate. Certainly, if Najib and Zahid had assumed that they would get off their massive criminal charges by supporting the so-called Sheraton move and backdoor government, they have been sorely disappointed.

Both could be forgiven for concluding that ‘PM8′ and his impatient would-be successor Azmin have decided to throw them under the bus the moment they get their chance.  Indeed, for ambitious Azmin it would be mighty convenient to have the two of them languishing safely locked up in jail for the next few decades while he makes hay at their expense.

These squabbles reached a head today just as Najib and his wife were both humiliated in the courts during their separate corruption trials.

The catalyst came as Sabah’s UMNO leadership (which is close to Zahid) leaked its list of candidates for the impending election in the state which the PN leadership had hoped to snatch through another backdoor bribery of MPs.

The list has ditched Azmin and Muhyiddin’s own crooked leadership candidate, namely the disgraced Musa Aman, against whom a string of charges were dropped in the run up to the failed Sabah coup attempt, and Bersatu clearly feels squeezed out by its allies.

The result, as political observers appear to widely agree, has been this retaliation against Zahid’s cronies over a project he commissioned. It is a matter that Azmin will have long held in his back pocket given that investigations have been underway by his allies in the MACC for some considerable while, according to reports.

So, this sudden and dramatic, if secretive move is widely interpreted as a politically motivated attempt by Azmin/Muhyiddin to bring UMNO’s angry warlords back into line and to get a more amenable list together before the Sabah line up is officially published possibly as early as tomorrow (Thursday).

If Zahid comes to heel it is speculated that the Datuks, whom the judge has remanded until Friday, could well find themselves anonymously released again with the accusations of egregious theft and deceit against the poor people of Sarawak consigned back to the MACC’s ‘No Further Action’ folder!

That matters under PN should have come to such a pass, with presumptions of such gross corruption and abuse of legal processes widespread, must surely hit a new low even for Malaysia.

It seems hard to imagine such a tactic could create a sustainable future for this alliance of cornered politicians which depends on each and every one in order to survive.

How much longer can it be before someone pulls the rug from underneath?