Buttering Up The Royals?

According to reliable sources, a major Independent Power Producer (IPP) project that was discarded under the PH government has now been revived in Terengganu on the instructions of the current unelected prime minister and his cabinet.

The original deal involved yet another notorious ‘negotiated contract’ by the Najib government with the power provider Tenaga Nasional (over 60% owned by government controlled funds) to replace the elderly* Paka gas-fired station, which was de-commissioned this year.

However, the in-coming PH government reviewed the proposal along with a number of other such arrangements, and announced its decision in October 2018 to cancel the “1,400 MW power plant project by Aman Majestic Sdn Bhd and TNB in Paka, Terengganu” along with three other IPPs.

Energy, Technology, Science, Climate Change and Environment Minister Yeo Bee Yin said the cancellations were because of non-compliance of conditions stipulated in the offer letters from the developers.
“Other projects are the 1,400 MW power plant by Aman Majestic Sdn Bhd and TNB in Paka, Terengganu, the 300-MW combined gas engine power plant project by Sabah Development Energy (Sandakan) Sdn Bhd and SM Hydro Energy Sdn Bhd at the Palm Oil Industrial Cluster (POIC) in Sandakan and the cancellation of the 400-MW solar energy quota to Edra Power Holdings Sdn Bhd for the development of a solar energy plant,” she said during Question Time at the Dewan Rakyat today. [New Straits Times]

The reasons appeared compelling enough. The Energy Minister, Yeo Bee Yin, explained projects involved a huge investment by Malaysian taxpayers to build power plants at a time when there was already an excess electricity capacity of around 46%.

She confirmed the cancellation would save over a billion ringgit and she further outlined the widespread concerns about the cronyism involved in secretive negotiated mega-contracts issued under the Najib government, such as these IPP projects:

Yet, according to inside sources, the Muhyiddin government under the instructions of ‘PM8′ has now revived active consideration of the Paka project.

The revelation comes just days after leaks about a controversial bail out merger of the developer Eco-World with the Khazanah subsidiary UEM Sunrise. The deal was pushed through by the chairman of the fund, Prime Minister Muhyiddin.

Eco-World is owned by the businessman Liew Kee Sin, regarded as an UMNO crony, who made vast profits under Najib by selling on shares in the cash guzzling Battersea Power Station project in London at unsustainably inflated prices to GLCs (namely PNB and EPF) which were at that time controlled by Najib.

Today the CEO of UEM Sunrise resigned, apparently in protest at the pouring of yet more increasingly scarce public funds into a failing crony enterprise by this present administration.

It leaves one to consider who would benefit from a restoring of the Paka negotiated (rather than properly tendered) IPP project in Terengganu at such a cost to the public purse?

The name of the original power plant holds a clue on this matter – it was named the Sultan Ismail Power Station (SIPS).

Given the cancelled project was described by the PH government as a “1,400 MW power plant by Aman Majestic Sdn Bhd and TNB [Tenaga Nasional Berhad]” a further step is to ascertain who is behind the joint venture partner Aman Majestic?

Again, the clue is in the name – ‘Majestic’

The 100% owner of Aman Majestic, Joint Venture Partner in the IPP, is the Sultan of Terengganu, Mizan Zainal Abidin

Naturally, the details of the negotiated IPP contract and profit sharing arrangements are hidden from public view. 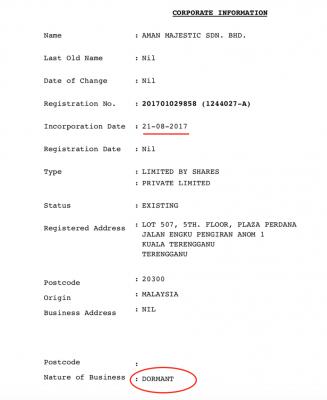 However, the basic company details of Aman Majestic provide strong clues as to the level of manpower, investment and expertise that the Sultan’s company would be likely to bring to the power production and distribution project.

The company has yet to register a profit and is currently described as ‘dormant’. So, no employees and no track record.

Significantly, it is clear that having been incorporated only in late August 2017 (not long before the Najib government was voted out) Aman Majestic, which has a round capital base of a million ringgit, was set up purely for the purposes of engagement in the IPP.

Indeed, it would appear that Aman Majestic has had zero involvement in the power industry as its financial records indicate zero activity in line with the dormant status. 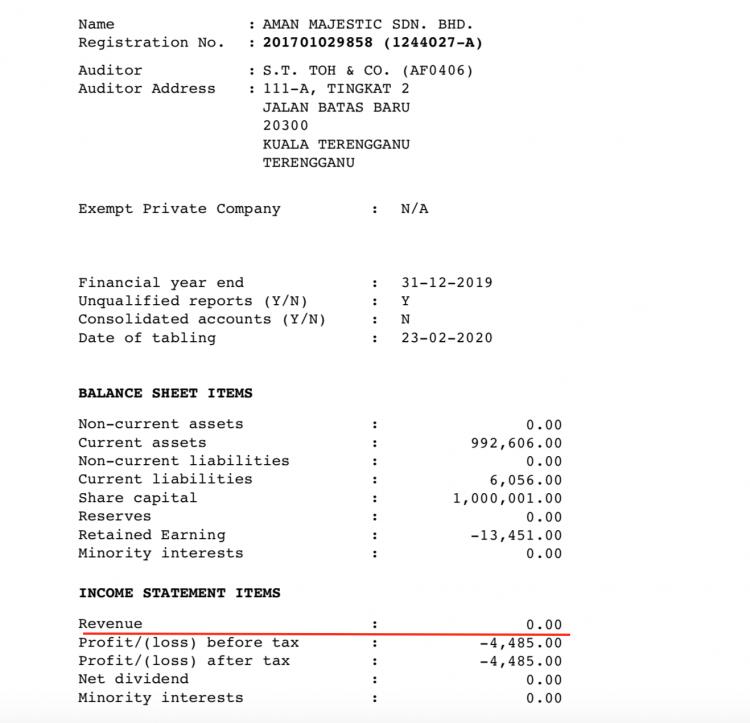 The Sultan of Terengannu, which is Peninsular Malaysia’s main oil producing state, is meanwhile famous for having recently moved into a palace that cost over a billion ringgit to build.

Unfortunately, the rest of the population in that oil producing state suffers from being amongst the poorest in Malaysia –  based on reports, 21% of the people in Terengganu live far below the poverty level, at RM780 (income per month) or less, and more than half of the state’s population is living below Malaysia’s urban poverty line of RM3,000 monthly household income. 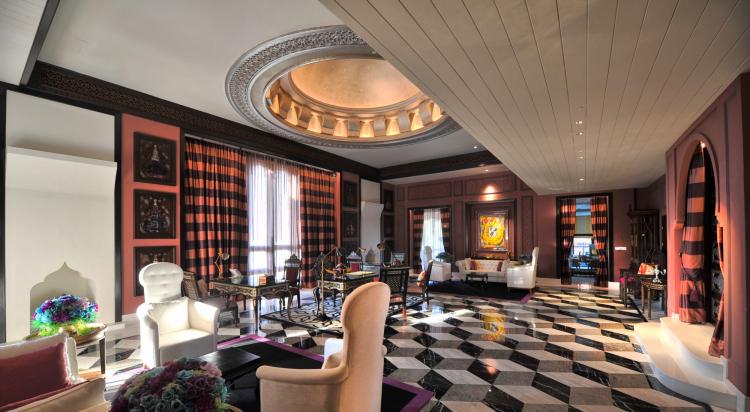 It begs the question who advocated the restoration of this unnecessary project at a time of an apparent electricity glut but dire financial stress and why?

Is the present prime minister seeking to ‘butter-up’ powerful princes as his parliamentary numbers fade away and if so would not these scarce funds be better spent on Covid relief for the hard-core poor who populate this state?

It would appear that a similar pattern exists for other such IPPs, ‘negotiated’ rather than tendered under past UMNO governments, which have been conveniently registered as State Secrets.

Another hugely wealthy businessman who has maintained good relations with government over many years is Francis Yeoh, the major shareholder of YTL, which is the operator behind a separate* Terengganu Paka plant and also the Pasir Gudang power station in Johor (supplying Tenaga through a convoluted IPP arrangement whereby the government denied Tenaga the right to construct its own plant, forcing it to arrive at a Power Purchase Agreement with operators like YTL).

Back in 2014, netizens pointed out similar concerns about potential ‘cronyism’ in Johor, as evidenced by the shareholdings in an advertised extension to the Pasir Gudang project.

Tenaga had announced that it had received authorisation to launch a new plant at the site, in tandem with a separate joint venture partner named SIPP Energy. 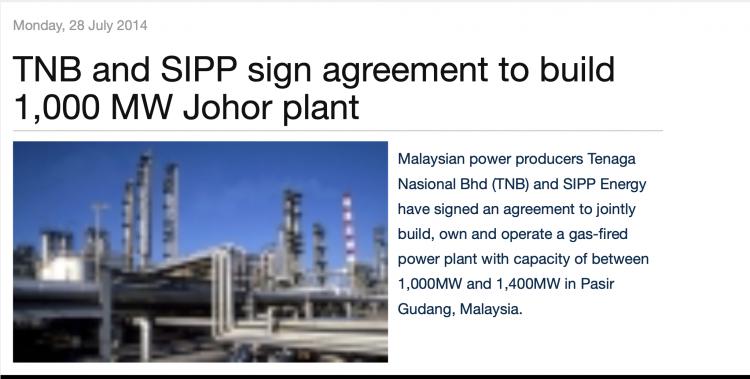 news at the time from the Power Journal

A sister company of SIPP Energy, called SIPP Power, is largely owned by Francis Yeoh’s YTL as one whistleblowing site pointed out – together with the same SIPP Energy. 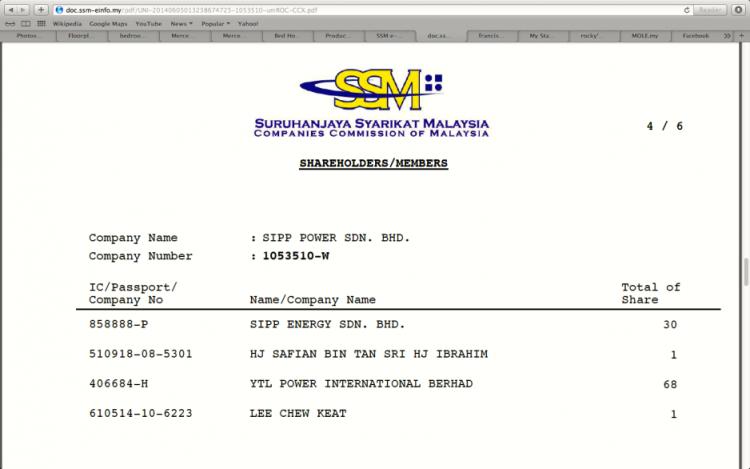 SIPP Power is clearly controlled by Francis Yeoh and YTL

However, SIPP Energy, which was the actual joint venture partner in this updated deal with Tenaga in 2014, is a completely different kettle of fish, despite the name call.

The completely different shareholders of SIPP Energy (compared to SIPP Power) are presently registered in Malaysia’s Register of Companies as the individuals below: 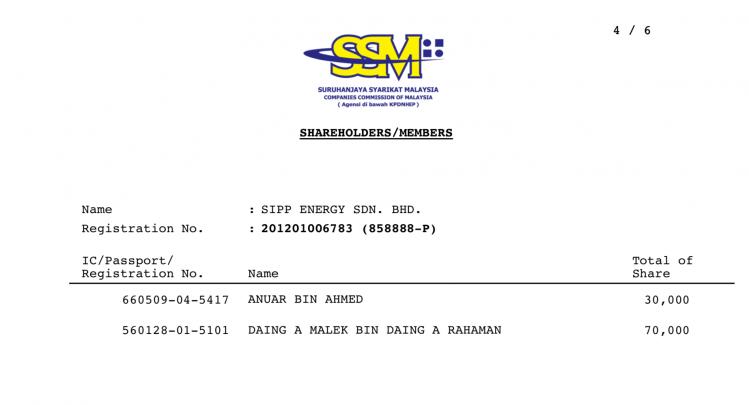 The dominant 70% shareholder of SIPP Energy, and therefore the joint venture partner with Tenaga in the Pasir Gudang project, is Daing A Malket Bin Daing A Rahaman, who was reported by the media at the time as being linked to the Sultan of Johor.

Subsequent press reports have further revealed the close business connections between Daing A Malek Daing A Rahaman and the Johor ruling family:

“.. the name of Daing A Malek Daing A Rahaman had repeatedly appeared as either director or shareholder in companies where the Johor royal family has interest.
Ask any politician in Johor about Daing A Malek and they would associate him with the Johor  monarchy.
The man is widely reported to be a member of the Royal Court of Advisers to the Johor Sultan and a close friend of the current ruler and his father.” [Malaysiakini 2018]

The previous PH government, of course, is known for having sparked royal ire over in Johor for various other cancellations of royally connected projects, although not of this particular power plant.

Having called another lengthy recess until November, ‘PM8′ has spent most of the past year buttering up politicians and key players on all sides as he has battled to command sufficient support for his cobbled rebel coalition and backdoor government.

His tactics have included blatant pork-barrelling: he has handed out public positions and cabinet jobs to MPs in return for support and, it would appear, returned to the practice of ‘negotiated’ projects behind the scenes. The cost to the already struggling economy has been astronomical, not only in terms of cash but also credibility.

Whether such tactics could achieve the potentially desired results of garnering influential royal support is quite another matter, of course.

* Updated: earlier we erroneously said YTL operated this station. They have corrected they operate a separate facility nearby