How The 1MDB Expose Caught Up With Trump's Top Fund Raiser

As Sarawak Report indicated last month, after the lobbyist Nicky Lum Davies pleaded guilty to secretly working for Jho Low to influence the Department of Justice and the White House over 1MDB, charges against Elliot Broidy could only be a matter of time.

The role of the former chairman of the Republican National Committee had already been laid out in excruciating detail in Lum Davies’ own indictment for breaking the Foreign Corrupt Practices Act.

It was learnt that Broidy had accepted an up-front fee of $8 million (paid by Jho Low through a company owned by rap star Pras Michel) and was demanding a ‘success fee’ of a further staggering $75 million if the case was dropped.

The payments were secreted to his wife’s law firm on the pretext of non-existent legal services in Jho Low’s case against asset seizures linked to 1MDB (opening to question her continuing licence to practice as a lawyer).

Organising a game of golf between President Trump and Najib was a key target of the conspirators and, as the latest filings from yesterday spell out, this was the occasion where Najib was hoping to talk the President out of the proceedings against 1MDB.

Sure enough, the papers were full of the story yesterday, as the gory details of the shameless influence mongering were once again spelt out as the DOJ inevitably made its move against Broidy himself.

A suggested guilty plea to avoid the whole affair being battled out in court reminded Broidy that the recommended sentence for his crime is up to five years in jail and a major fine. It is being widely speculated that Broidy will accept the plea in return for a lesser sentence.

He will become one of a growing circle of Trump’s close political associates and top Republicans who have been charged and convicted of corruption and indeed of senior figures caught out accepting kickbacks thanks to 1MDB.

Sarawak Report first broke the story about Broidy way back in March 2018 after receiving a series of leaked emails and documents from a network known as Global Leaks. Whilst other recipients in the media focussed on documents more related to US concerns, Sarawak Report explored in detail Broidy’s relationship to issues in Malaysia and his greedy bid for further business from Najib.

The bribes from Jho Low on behalf of Najib plainly put a whole new light on the Malaysian prime minister’s invitation to the Whitehouse the previous November, which had surprised many given the 1MDB investigation.

And, this was not the only business going on with Broidy. The leaked documents showed that the key Republican fundraiser was far advanced on a separate deal with Malaysia for his ‘private security’ firm Circanium, to allegedly provide internet security for Najib’s government.

Presented on May 4th 2017 the five year contract was pitched at a whopping US$42.5 million per annum, rising year on year, with a US$25 million up-front payment. That arrangement appears to have collapsed following the failure of Najib’s visit to obtain the desired game of golf with Trump or to end the DOJ investigation on 1MDB. It was a crushing failure for the Malaysian PM who found himself mocked for his grovelling approaches. 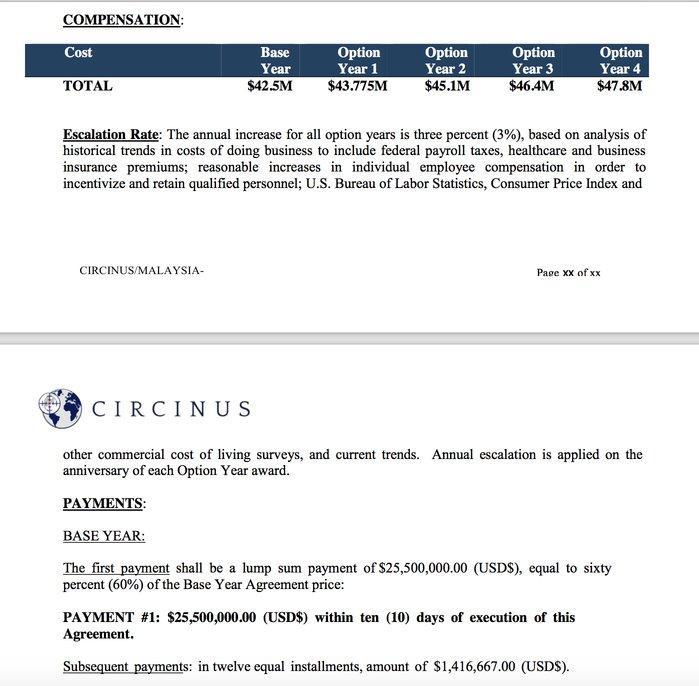 Broidy had hoped to continue his lucrative relations with Malaysia, moving from lobbying on to ‘security service provision’

The facts having thus been brought out into the open by the media the FBI took up the case in yet another extension of their giant 1MDB investigations.

It is not just the Trump administration who have fallen foul of the corruption of 1MDB. Malaysians will remember his predecessor Obama did indeed end up lured into a game of golf (before the scandal was exposed) and, again, it was Sarawak Report who dug up the connections between that event and Obama’s own key fundraiser, the businessman Frank White.

Frank White, an office equipment specialist, had received a lucrative solar power contract funded by 1MDB and was in the process of being placed in charge of a massive half billion dollar investment fund (together with none other than the same rap-star Pras Michel) that was linked to the fund and also to its corrupt partnership with Aabar/IPIC from Abu Dhabi.

Following the exposure in Sarawak Report this ‘Yucros’ venture was hastily disbanded. However, Sarawak Report had also revealed that White had channelled several thousand dollars to a number of Democrat election campaigns out of the money he had received from 1MDB for the solar power project.

The FBI have also conducted investigations into those payments – the solar power plant was never built.

Thanks to reporting and thanks to the US forces of law and order all those greedy entities from whichever political persuasion should think more carefully before seeking a share of Malaysia’s stolen money.