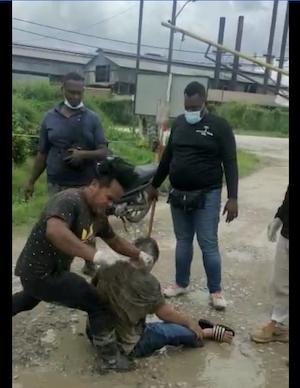 Sickening attack by five thugs on one boy

The awful scenes of the death of George Floyd opened the eyes of the American public to a brutal reality hidden from normal view – everyone knew it was just one example of how black people have fared at the hands of law enforcement.

It was allowed to circulate by Facebook and YouTube, presumably in the public interest, but with a warning.

In Sarawak, the fortunately less terrible video of the systematic, prolonged and brutal beating of a stunned and defenceless young man at the hands of five ‘Security Guards’ for a private company owned by the Taib family is likewise the latest example of oppressive thuggery against native people.

His crime? Alleged trespass as he had come looking for his parents working on their plantation.

When we placed the footage on Facebook those anxious to hide the truth (the company itself?) rushed to get it taken down by complaining of ‘violent content’ to the moderators.

As a result, YouTube (who self-regulate and do so as cheaply as possible) took the easy way out – who cares about Sarawak? They are “sorry if you are disappointed”. 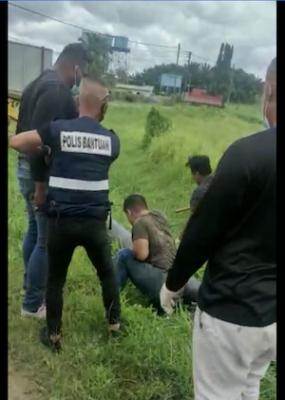 Therefore, given the obvious public interest and concern, we are posting it ourselves and employing our own ‘Sarawak Report Policy On Content’ which we consider to be superior to that of YouTube, given we put actual time and thought into the matter.

Under this policy we have decided to label the video with a warning but to nonetheless show it via our site, in order to expose how people are treated at the hands of self-confident bullies protected by this state government.

We believe that, as with the George Floyd video in America, every responsible Sarawakian should view the way 22 year old Neilson Digat Anak Regi was treated and consider what it says about the company Ta Ann who employed these thugs and who have so far issued no apologies. Instead, they have counter-sued the complainants according to the usual playbook.

Ta Ann, as all Sarawakians know, is owned by the Governor’s cousin and proxy Hamid Sepawi and luxuriates in huge timber and plantation concessions granted throughout the state of Sarawak thanks to the self-same Taib Mahmud. 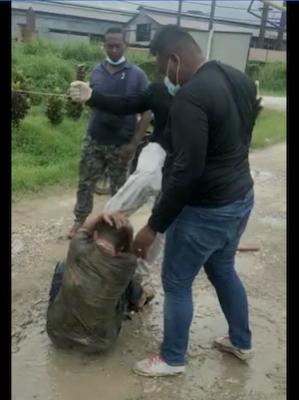 Picked up to be hit again

Neilson is understood to have come onto the palm oil plantation looking for his parents who both work there.

For this he was regarded as trespassing on the huge swathe of alienated public land and hence the treatment the ‘Security Guards’ meted out – they attacked the boy with sticks, and repeatedly punched and kicked him even as he lay still on the ground and tried to drag himself away.

If one of their number – a so-called Police Bantuan, who is an ‘auxiliary police officer’ paid for by the company – had not eventually intervened, the behaviour of these thugs makes clear they might easily have killed this boy they had chosen to take out their anger out on.

On Monday, the matter was raised in court by PKR land rights lawyer Roland Engan on behalf of the young, injured man.

However, instead of being dealt with by the local Miri authorities it was immediately raised upwards and out of the area to the state public prosecutors in Kuching – a sign of the special status of Ta Ann and its ‘important’ owners?

Expect delays in the hearing of it. Long delays, 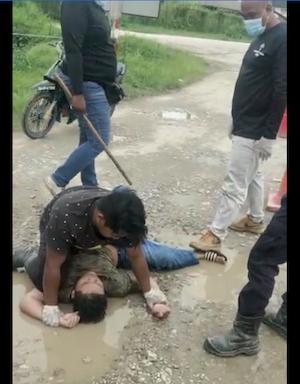 Contrast that with what has happened to the boy’s grandfather who had later returned to the company to protest at what had been done to his boy?

Understandably the older man carried a defensive stick himself and came with others – who wouldn’t?

The stick was not used as the old man made his complaint.

Nonetheless, the thug company folk saw fit to complain to the police over alleged ‘intimidation’ by the outraged grandparent and that case has been filed immediately into the local magistrate’s court, where if past precedent gives any indication there will be a sympathetic ear for the connected company and little concern for the dispossessed former native inhabitants of the land.

Most of the time the power of decision making, the forceful march of the bulldozers and the bias of the law enforcers all work successfully together to deprive the local people of Sarawak of their lands and livelihoods without much public appearance of the brute violence that underpins the vast land grabs that have benefitted the Taib’s and their political and business cronies over many years.

However, as any villager who dares stand up to what is going on knows only too well that if deemed necessary they will be attacked, beaten up and/or reported to the law to be framed, incarcerated or otherwise punished.

So, it is important for the world to be able to see how private guards working for a politically connected company in Sarawak think they can treat a defenceless individual whom they apparently find a nuisance, without calling the proper police as they should or considering in the least his human rights.

In Sarawak it is truly the law of the jungle – increasingly without the jungle.

Warning, the video beneath contains graphic punching, kicking and hitting with sticks by five people against a defenceless young man already beaten to the ground.