These videos have been removed from most Google and Facebook platforms. However, they are being passed from chat group to chat group like a misinformation virus – and they are deadly.

Perniciously, some of the videos have now been re-fashioned with Malay subtitles so that the lies being told can be passed into the homes of under-informed and rural people, who are left to wonder who these ‘global experts’ might be and whether they are perhaps telling the truth?

On Radio Free Sarawak several longhouse leaders have expressed concerns brought on by such propaganda telling them that Covid vaccines are every bit as deadly as the disease. Therefore they have told the radio station that they are advising their vulnerable communities to reject protection.

Indeed, anyone listening to the self-described ‘experts’ in these videos would learn that in fact Covid 19 does not exist, it is a hoax. They say the only thing that is dangerous are the vaccines developed by qualified scientists, which they are not.

Despite not being qualified to do so, these self promoted ‘experts’ also readily claim that the vaccines can ‘change your DNA’ harming this generation and future generations. How or why they do not bother to explain.

These nutcases (because that is what they are) deny that there are tens of thousands who have been hospitalised by the disease and over two million who have died. Instead, they claim that the entire pandemic is a ‘conspiracy’. It doesn’t exist.

They imply that all the world’s medical doctors have suddenly decided to band together with evil drug companies to make the whole thing up – that’s the message in these videos being passed like wildfire through social media round Malaysia.

In ‘Ask the Experts’ a character named Dr Andrew Kaufman declares solemnly to the camera that there have been no excess deaths at all during the past year. “There is no pandemic” he declares.

It has left even well informed audiences confused. If these folk are western experts qualified as doctors why are they warning of such things unless it’s true, one Malaysian asked Sarawak Report?

The answer is that these video stars are not the experts they claim to be. Sarawak Report and fellow researchers have taken some time to check if they are indeed entitled to claim expert knowledge about viruses and vaccines and infectious diseases.

The answer is no: on all available evidence they are all cranks, outliers and largely discredited.

For example, take a look at Dr Kaufman’s other theories and it turns out he believes there is no such thing as a virus in the first place. All the great achievements of modern virology, such as wiping out smallpox, polio and measles are nothing to Dr Kaufman, whom it is worth mentioning happens to be a psychiatrist rather than a medical practitioner.

Indeed, although they bandy about their titles, virtually all the ‘expert doctors’ in these videos are simply not qualified to discuss contagious diseases or they are discredited (often both).

One useful article ‘Busting Bad Doctors‘ has helpfully debunked most of the individuals presenting themselves as experts in the videos now circulating in Malaysia – simply by researching widely available information.

Here are its main findings about the cast of characters in “Ask the Experts” one of the main anti-vaccine videos which is being circulated on social media:

Dr Kauffman “he is a psychiatrist. He is not a virologist, immunologist, epidemiologist, or any of the other medical specialities that might be relevant to having a credible ‘doctor’s’ opinion on Covid-19…. He calls himself a ‘natural healing consultant’, which one can confidently read as ‘quack’. “

Next in the cast of ‘expert doctors': “Dr Hilde de Smet practices natural and complementary therapies, applied kinesiology, traditional Chinese medicine, auriculotherapy, herbs and nutritional supplements, homeopathy, and light therapy, and has studied many healing systems, from the esoteric healing of Alice A. Bailey, Reiki, and the Alchemic Healing of Tareth, to the Toltec traditions from Mexico, the Q’ero traditions from Peru and traditional Amazonian healing methods. Although she qualified as a doctor, with a specialisation in anaesthesiology, you’ll notice a paucity of science-based disciplines in her actual practice….. she says that animal trials were skipped in the development of new Covid-19 vaccines. This is false.”

Another: Dr Elizabeth Evans describes herself as a retired doctor, though it is not clear what brought on her retirement. She still practices, however, as a healer. She uses ‘Nambudripad’s Allergy Elimination Techniques’, which is quacksalvery developed by a chiropractor and based on the pseudoscience of kinesiology. She is also a ‘Mitochondrial Rescue Practitioner’ and ‘Wireless Radiation Health Adviser’. She has published no research.

Dr Mohammad Adil (see more below) has had his medical licence suspended for 12 months by the UK General Medical Council, for public statements claiming that Covid-19 is a hoax orchestrated by global elites in order to control the world.

Dr Vernon Coleman also thinks it’s a hoax. Like all good conspiracy theorists, he complains that ‘the truth’ is being silenced, and he is being smeared. He has also said AIDS is a hoax. He is a superb self-promoter, a prolific self-published author, and runs hundreds of premium-rate helplines, many of them about sex. He’s been fined for misconduct as a GP, has been censured by the Press Complaints Commission, has been banned by the Advertising Standards Authority, and has been injuncted by the High Court. 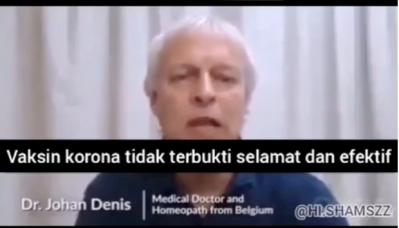 Debarred yet starring as an ‘expert’.

And what about the star of another WhatsApp video presently circulating in Malaysia with Malay subtitles, the Belgian, Dr Johan Denis?

Whilst describing himself as an expert in the video he fails to point out that he too is discredited and disbarred by his own professional bodies as a result of giving fake mask exemption certificates and propagating nonsense. He is no longer allowed to practice. This is because he is deadly dangerous. Misinformation kills.

His co-star, Dr Daniel Cullum is a chiropractor, which means he claims to set straight bad backs. Chiropractors have a tendency to rail against established medicine, perhaps because they have generally only studied their own limited field and other scientists have called them quacks. If you encourage people to reject treatment that can save their lives you are deadly dangerous to those people.

All these ‘experts’ are linked by an outfit called the World Doctors’ Alliance created since the outbreak of Covid 19 by the above Dr Mohammed Adil who has now been himself suspended by the NHS in Britain because of his nutcase views and dangerous propaganda.

The list of discredited participants continues with the Irishwoman Professor Dolores Cahill, who combines her qualifications with extreme rightwing politics and giving speeches at violent anti-mask rallies. She has been asked to step down from an EU committee she had been part of.

So, Malaysians must warn their neighbours that the self-proclaimed ‘experts’ in these videos are by no means considered experts by their own fellows in the field of virology or indeed much else and they are by and large outliers and cranks.

So, what has driven them to become part of this agenda to create confusion and fear as far away as Malaysia? The answer would appear to be that most of them have a local commercial interest in pushing ‘alternative therapies’ by persuading people not to trust modern medicine.

Most of them are selling scepticism to promote their business. Even though Malaysians are unlikely to access their dubious services the advertising could put them in mortal danger. This messaging is effective manslaughter with a profit motive.

Vaccination is the best guard we all have against a very real and dangerous virus. The ones that have been passed by world authorities have all been through the kind of rigorous tests that no ‘Mitochondrial Rescue Practitioner’ or ‘Wireless Radiation Health Adviser’ or chiropractor has had to undergo.

There is no a global conspiracy involving all the world’s doctors and pharmaceutical companies to wipe out the human race. Just an inevitable handful of nutcases who have found a way to make money after failing as regular doctors.

Malaysians must ignore these self-interested snake oil salesmen and warn their friends and neighbours to trust the country’s own medical authorities who are trying to bring vaccines to the people, just like every other world medical authority, in order to save lives.

If Covid is allowed to rip through the longhouses and other remote communities it could decimate vulnerable, isolated groups of people with low immunities. They more than anyone must take the vaccine.

DON’T PASS ON THE VIDEO. DO PASS ON A WARNING AGAINST THE VIDEO.

Read this full expose on the blog Platform.