How Dare Ordinary Folk Criticise ME!

Haflin Nazri Aziz, she will have you know it’s ‘Datin Seri’ by the way (her husband, who was born before her mum, divorced his No 1 to release the title) is not a woman to play the humble politician’s wife.

A religious duty? She photographs herself a lot, but wearing little.

Caring for constituents is simply not her style. Nor is keeping a modest, low-key profile at her husband’s side.

That at least is the message from her Instagram account, where preening her backside and showing off her other ‘attributes’ comprise her favourite poses as a muslim political wife.

Look what she treated lockdown Malaysians to celebrate the end of Ramadan.

Our research has dug up not a single post exhibiting the least concern for ordinary Malaysians nor any of her husband’s electorate, who have suffered the most awful privations of the last six months of Covid ’emergency’ lockdown.

There is no evidence she has even visited his rural constituency of Padang Rengas in fact, despite globe trotting proclivities elsewhere. 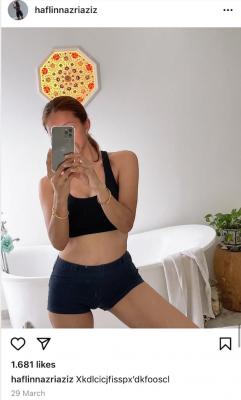 It is political spouses such as this that are threatening to lose PN many of the seats that BN clung on to at GE14 – when Nazri’s own vote collapsed by over 13%.  And does this lady care about that or about what people think? It seems she doesn’t think she needs to.

Indeed, when she isn’t attacking her own UMNO leader, or the PM himself (whom she accurately accused of being a backdoor leader when Nazri flirted with defecting) and even the King, whom she claims “begged” her husband to approve his previous wife, she snubs all those less conspicuously fortunate than herself.

She has taunted daily with plates of food and luxuries enjoyed at a time ordinary folk are waving white flags and begging for food parcels (today she posted moules marineires de Paris) and she has daily flaunted her privileges, travelling across states despite the lockdown to enjoy her ‘private’ Kelantan beach resort hotel. 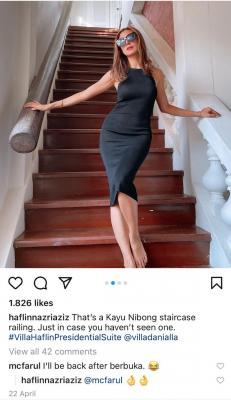 Influencing in Kelantan – well away from KL or her Perak constituency

Meanwhile, there is not a single visit to her husband’s Perak constituency recorded, let alone one to offer anyone any help or sympathy at this designated period of national emergency.

She deserves plaudits indeed for avoiding the sanctimonious shows of so many present politicians who have travelled round electioneering in disguise and bandying food parcels paid for by the state but bearing their own face on the packaging to claim the credit.

Doubtless also her provocative journeys to enjoy the ‘perfect quarantine’ with little son Jean Pierre (of whom more anon) at her family’s Kelantan beach resort qualified as a ‘business trip’ exempted from the MCO, owing to her key work as an ‘influencer’ and ‘entrepreneur’, which has involved much preening and posing to the camera in this location over recent months.

Indeed, one must conclude that she has been performing vital work for the nation by promoting her family resort for tourists, who are presently unable to travel thanks to her husbands ’emergency’ lockdown government. 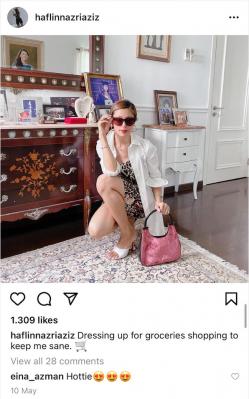 My MCO – how about yours?

At least she has not overly taken advantage of her situation, in her view .“I’m proud to say that my family doesn’t use any religious funds to buy hotels”, she piously posted on one occasion. How very decent of them.

In short, as a growing number of news articles have now recorded, Nazri’s self-adoring wife sees no reason whatsoever why she should mind what she says or do things she doesn’t want to just because others might think her rude, selfish, inappropriate or uncaring towards those her husband is supposed to represent and who ultimately support her lavish lifestyle.

She is thoroughly liberated unlike most Malaysians.

When undermining her husband’s government, and indeed the health of the nation, for example, by publicly boasting her refusal to be vaccinated, she gave her reason thus: 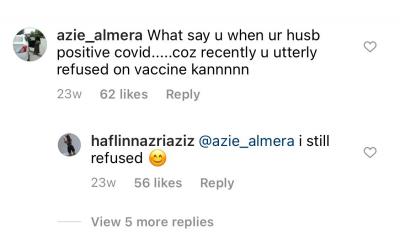 She has freedom of speech.

“I have the right to say all this. it’s not against the law. We have freedom of speech”.

At a time of immense and oppressive crackdowns by her husband’s government against ordinary citizens who venture onto social media to dare complain about its policies; when film-makers have been arrested for highlighting the torture of children by police and when judges have sought yet again to cripple an independent news organisation with a massive fine for seeking to report concerns expressed by citizens about mining in their area such a claim seems laughable. 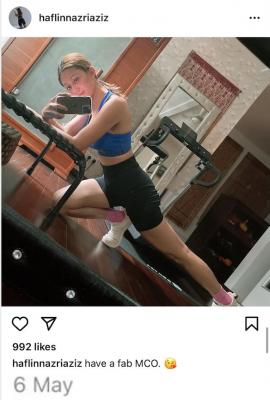 But the hallmark of PN has been that the rules of the country are not applied to those who make the rules. Haflin Nazri Aziz is merely one of a competing troupe of selfish privileged hangers on to this kleptocratic regime, who consider themselves superior and entitled to do as they like and meanwhile sneer at the law-abiding public who are paying for the party.

Just to re-enforce that message, she recently uploaded a cute and scanty snapshot of herself out at the gym (or is it home at her personal one?) with the crowing caption: “HAVE A FAB MCO!”

Which brings us to her present pass, where this self-promoter has found herself together with her husband widely condemned and criticised for once again breaking his own government’s MCO to travel off to France, apparently on a vital national mission to enrol their five year old son in a Paris lycée. 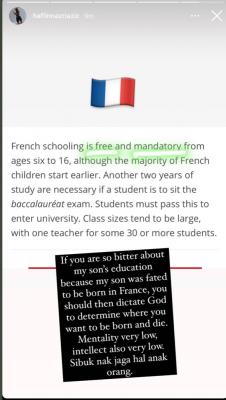 Social media has erupted with queries as to why this journey is merited whilst Nazri’s government is keeping most of the nation under virtual lock and key, including kids?

What confidence likewise ought Malaysians have in their nation’s schools when government ministers send their own children fleeing from the country for their education, even as young as five?

Was this a cue for Haflin to keep her head down as she headed out? Of course not. Such “low intellect” critics deserved to have their noses rubbed right in it!

This heroine of her own instagram page has instead set about uploading from the first class cabin of her departing plane, snubbing her critics with yet more scenes of her mysteriously luxurious lifestyle and preening her features (which she plainly thinks are beautiful) with lotions and potions that normal people can’t afford.

In between crowing “on est arrivee en France’ Haflin seemed to claim that since her five year old Jean Pierre was ‘fated’ to be born in France he is therefore a citizen of that country and ‘mandated [forced]’ to accept free schooling there. Except, not any of that is true as the actual regulations show:

Nazri’s son is not eligible….

Not only is the 5 year old JP not eligible for French citizenship but Malaysian citizens are entitled to demand to know why yet another frog-minded PN MP (see Edmund Santhara exposed by Sarawak Report for spending lockdown in New Zealand on similar grounds) is priming his off-spring to become a foreigner? 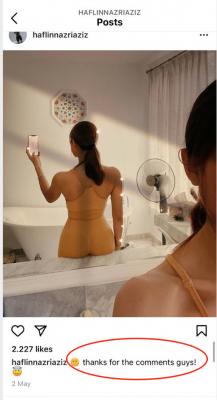 It is illegal for a Malaysian to also hold another passport, so why are representatives of the people making arrangements for their own children to be citizens elsewhere?

Could it be that they are only too aware of the disastrous mess they have made of governing the country and need to parachute them out of it?

Certainly, very many angry citizens have concluded exactly that, just as they at the same time wonder how it can be that life-long politicians such as Nazri Aziz have managed to build up such immense wealth during a career of salaried ‘public service’. 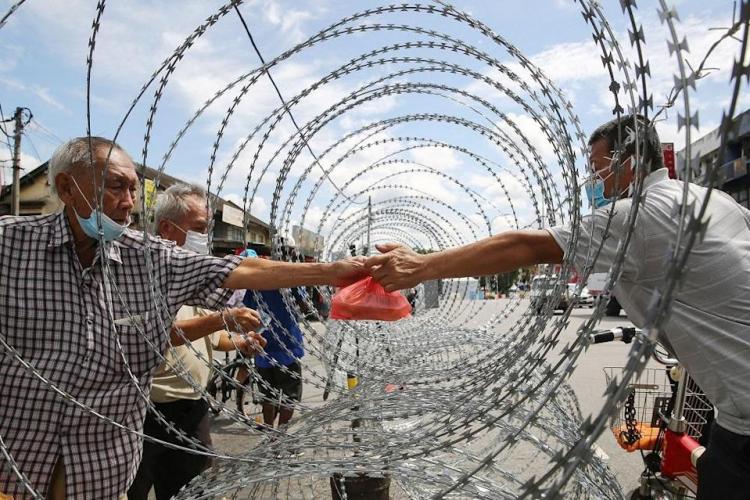 Meanwhile, in the real Malaysia run by her husband…..