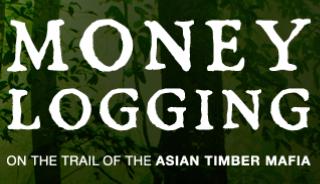 On 3 November, a 300-page non-fiction paperback on Borneo logging will be launched on the occasion of the 50th session of the International Tropical Timber Council in Yokohama, Japan. The book, entitled Money Logging: On the Trail of the Asian Timber Mafia, reads like a thriller and is authored by historian and campaigner Lukas Straumann. Straumann is the executive director of the Bruno Manser Fund, a Switzerland-based advocacy group closely connected to the plight of Malaysia’s indigenous peoples.

One of the book’s aims is to expose the environmental crimes commited by Abdul Taib Mahmud („Taib“), the long-term chief minister and current governor of Sarawak, a Malaysian state in Borneo.

„The book is a wake-up call to the international community to treat the Taib family as what they are: politically-connected criminals who have stolen vast assets from the people of Sarawak in a carefully-planned effort“, author Lukas Straumann said.

The book shows how Taib Mahmud managed to dominate politics in Sarawak for over three decades and how he abused his public office to exploit Sarawak’s natural resources and turn his family into billionaires.

Money Logging will be launched with a ten-city publicity blitz that will start in Yokohama, Japan, and lead the author to Canada, the United States, the United Kingdom England, Belgium and Switzerland.

„We aim to present the book at the Western cities where the Taibs have reinvested their illicit proceeds from the destruction of the Borneo rainforest“, said Straumann.

Sarawak, a Malaysian state in Borneo, has long been the world’s largest exporter of tropical timber but log production has fallen significantly in recent years.

In June 2011, Malaysia’s Anti Corruption Commission (MACC) opened an investigation against Taib Mahmud which is still ongoing. Taib was pushed to resign as Chief Minister in February 2014 and has since taken over the office of state governor.

Pre-publishing sales of Money Logging are exceeding expecations. Orders can still be placed at www.money-logging.org

Learn more about the planned events:

Money Logging will be globally launched on the occasion of the 50th session of the International Tropical Timber Council in Yokohama, Japan. For thirty years, Malaysia’s rainforest despot, Taib Mahmud, has exploited the rainforests of Borneo. While his family members became billionaires with assets in 25 countries around the globe, Borneo’s indigenous people have had little benefit from the logging industry that was brought into their forests as an agent of „development“.

Ottawa is the first stop of Lukas Straumann’s North America tour with Money Logging. Join us for the night and learn about the presence of Borneo despot Taib Mahmud’s family in Ottawa and their multi-million dollar investments in Canada.

Vancouver is the second stop of Lukas Straumann’s North America tour with Money Logging. He will speak at the University of British Columbia’s school of journalism. This event is organised in cooperation with the UBC’s forest sciences unit.

Lukas Straumann will present his book Money Logging: On the Trail of the Asian Timber Mafia and disclose the money trail that leads from the Borneo rainforest to California. This event is organised in cooperation with The Borneo Project (http://borneoproject.org).

The Washington DC book launch of Money Logging will address the question how Malaysia’s Taib family brought its proceeds of Borneo timber corruption to the United States. The Taibs bought buildings worth tens of millions of dollars in the US, including the building in downtown Seattle that houses the FBI’s Seattle field office. Why did the FBI’s due diligence fail when it rented its premises from an Asian kleptocrat? This event is organised in cooperation with the Environmental Investigation Agency (www.eia-global.org).

Details will be soon available