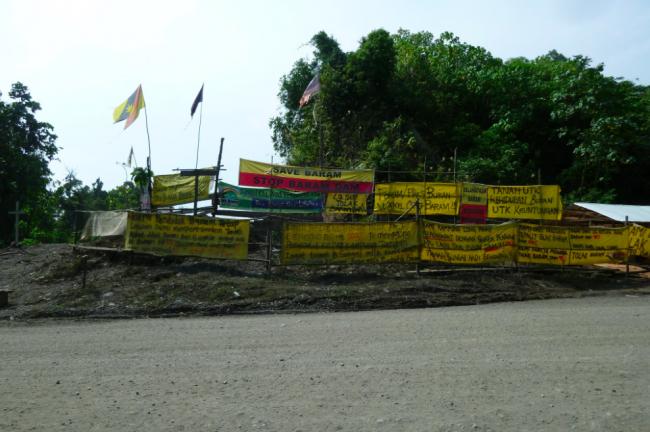 BARAM: The Baram Dam blockade which was erected nearly a year ago by the indigenous communities who are against the proposed Baram Hydroelectric Power (HEP) Dam Project at KM15 Jalan Samling, Baram was dismantled by the police, Forestry Department officers and loggers this morning. However, the loggers access to the site was short-lived as the protesters put up a new barricade hours later. According to Johannes Luhat, one of the protesters who is manning the KM15 camp blockade site, about 50 police General Operation Force (GOF) personnel, 10 Forestry Department officers and a handful of loggers from the logging company M. M. Golden and/or Autorich Sdn. Bhd. came up to the barricade that the protesters set up near the junction going into Long Kesseh village at KM15 and proceeded to dismantle it.

Hearing the news that the barricade was dismantled, the protesters who are at KM15 camp when down to the site to confront the police, Forestry Department and the loggers to stop them from entering the site. “When we arrived at the site, we asked them who authorised them to dismantle the blockade, since the area is still under dispute and no court order was made to order us to lift our blockade”, said Johannes. “One Forestry Department officer by the name of Asan Udau told us that we were breaking the law by setting up the barricade to stop the company from entering the site and to extract the timber. “We told the Forestry Department officer that the company is actually logging on native customary land belonging to the villages of Na’ah and Long Kesseh and doing it illegally as they have yet to conduct an environmental impact assessment (EIA) study of the area, which was previously logged before. Furthermore, villagers from Na’ah and Long Kesseh are against the said logging activities”, said Johannes.

The protesters told the Forestry Department officer that a police report and a report to the Malaysian Anti-Corruption Commission (MACC) had been lodged against the illegal logging activities of the company in July this year and they have yet to receive a response either from the police or MACC. After much argument, the protesters managed to put up a fresh new barricade at the same site and told Forest Department officer to give them a 3 day grace period not to dismantle the new barricade, which the officer agreed. As of 4.30pm today the new barricade is still standing. M. M. Golden Sdn. Bhd., a sub-contractor to Autorich Sdn. Bhd., is extracting timber on logged over forest on the native customary lands of the villagers of Na’ah and Long Kesseh for the purpose of clearing the area to make way for the construction of the proposed Baram HEP Dam. We will update more as we get more information from the ground. – End –

Press Statement issued by: Mark Bujang Secretary, SAVE Rivers For more information you can contact me at [email protected] or +60148776685.