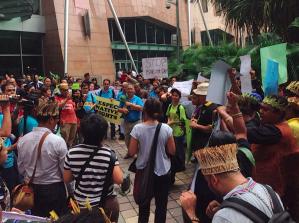 International power companies meeting in KL this week have met with protests: indigenous peoples are asking them not to become involved in Malaysian dam building.

(KUALA LUMPUR / MALAYSIA) Indigenous peoples from all over Malaysia travelled to their capital city today to ask the international power industry, which is currently meeting in Kuala Lumpur, not to support dam-building on their ancestral lands. “Mega-dams violate fundamental human rights by forcing indigenous peoples off their customary lands and into resettlement sites where people experience deplorable conditions of impoverishment, joblessness and hunger”, explained Thomas Jalong, president of the Indigenous Peoples Network of Malaysia (JOAS).

Over 150 indigenous people from both East and West Malaysia protested today in front of the Convention Centre beneath the famous Petronas Towers in Kuala Lumpur where the conference is taking place. The protesters have asked the international power companies to withdraw from, or not get involved in, planning and investing in Malaysian mega-dams. Any involvement in Malaysian dam building would make them complicit in the human rights violations perpetrated by the Malaysian authorities and the two power suppliers and dam developers, Sarawak Energy and Tenaga Nasional.

Recent reports on the human rights situation at the Murum dam and the site of the proposed Baram dam in Sarawak have revealed just how Sarawak Energy has been systematically neglecting the rights of the indigenous peoples affected: the rights they have been denied include their right to information, participation, self-determination and free, prior and informed consent, as well as their right to education. 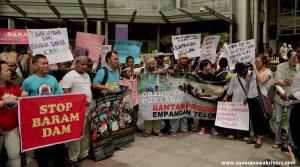 A number of international investors have already withdrawn from the Sarawak dams and the associated projects: Norsk Hydro and Rio Tinto Alcan backed off an aluminium smelter in 2009 and 2012 respectively. Hydro Tasmania has considerably reduced its involvement in Sarawak following strong public criticism in late 2012. ABB announced it was reviewing its business in Sarawak earlier this year.

Earlier this week, the Bruno Manser Fund announced that it had sent out a fact sheet on the risks of investing in Sarawak to companies attending the ASEAN Power Week, including Alstom, Wärtsilä, Siemens, Aecom, Doosan and Hitachi. The lack of a qualified workforce and a high corruption profile are just two of the reasons that make Sarawak a difficult investment environment.