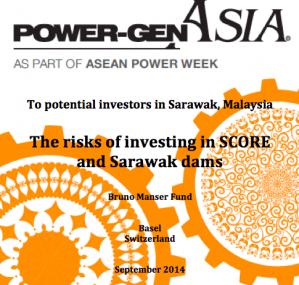 (BASEL / SWITZERLAND, KUALA LUMPUR / MALAYSIA) International power companies have received a letter from the Bruno Manser Fund (BMF) informing them of the financial, legal and reputational risks associated with investing in the Malaysian state of Sarawak. The Swiss NGO’s market outreach campaign coincides with the ASEAN Power Week starting in Kuala Lumpur this Wednesday. Around 8000 delegates from the international power industry are expected to attend the conference.

Sarawak Energy Berhad, the Malaysian power supplier and dam developer, is one of the hosts of the ASEAN Power Week. Sarawak Energy is using the occasion to promote its Sarawak Corridor of Renewable Energy (SCORE) initiative: SCORE is a rapid industrialization programme and one of Asia’s largest energy projects, based on a series of large dams. BMF has now informed international power giants, including Alstom, Wärtsilä, Siemens and Hitachi, about the multiple risks associated with investing in Sarawak’s SCORE initiative.

BMF Executive Director Lukas Straumann said: “Sarawak Energy and the Sarawak authorities advertise their SCORE initiative aggressively to international investors. They fail to mention the major risks associated with their initiative. Investors doing business in Sarawak will be faced with massive corruption, mismanagement and a lack of supporting infrastructure.”

The BMF fact sheet highlights six major risks: companies may lose out when bidding for contracts because bribery is common practice. The feasibility of the US$ 105-billion initiative is highly questionable as it is supply-driven rather than demand-driven and will be highly dependent on state funding. Furthermore, SCORE faces structural problems such as the lack of a qualified workforce and supporting infrastructure. Sarawak Energy has a weak debt-servicing ability and has a track record of being incapable of dealing with major safety issues associated with the construction of dams. Finally, Sarawak Energy has repeatedly violated internationally accepted standards and rights and has, therefore, been confronted with widespread opposition from indigenous communities.

A number of international investors have already withdrawn from SCORE because of its risky nature: Norsk Hydro and Rio Tinto Alcan withdrew from an aluminium smelter in 2009 and 2012 respectively. Hydro Tasmania has considerably reduced its involvement in Sarawak following strong public criticism in late 2012.

The delegates of the ASEAN Power Week are meeting from Wednesday to Friday this week at the KLCC beneath the Petronas Towers in Kuala Lumpur. Malaysian civil society groups have announced protests.