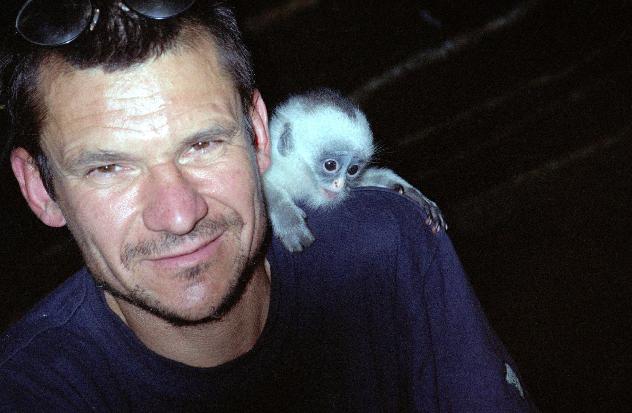 (BERN / SWITZERLAND) A team of Swiss scientists honour missing rainforest advocate Bruno Manser with the announcement of the discovery of two new animal species in the tropical rainforests of Borneo. This was announced today by the Natural History Museum of Berne, Switzerland, on the occasion of Bruno Manser’s 60th birthday on 25 August 2014.

The two new species are a spider of the goblin spider genus Aposphragisma, named Aposphragisma brunomanseri, and the Murud black slender toad, Ansonia vidua. Both species have been found in the rainforests of the Malaysian state of Sarawak.

Aposphragisma brunomanseri has been collected by a Dutch-Swiss research expedition in Western Sarawak in the 1990s and has been described during a recent international research effort by zoologist Marco Thoma from Berne’s Natural History Museum: „The species epithet is dedicated to Bruno Manser (*1954, missing, presumed dead), a Swiss environmental activist and ethnologist, most famous for his support of the nomadic Penan people against the destruction of the pristine rain forest in the Malaysian state of Sarawak.“

The Murud black slender toad, Ansonia vidua, has been discovered in Sarawak’s Pulong Tau National Park during an international expedition directed by Dr. Stefan Hertwig from the Natural History Museum of Berne and Berne University’s Institute for Ecology and Evolution. The new species has been discovered during a night excursion near a river at an altitude of 2150m at the Gunung Murud mountain in the region where Bruno Manser went missing.

Bruno Manser was born on 25 August 1954 in Basel, Switzerland. From 1984 to 1990, he lived in Sarawak with the Penan, South East Asia’s last nomadic hunter-gatherers. After returning to Switzerland, he founded the Bruno Manser Fund, a human rights and environmental organization that champions the rights of Sarawak’s indigenous peoples. Manser has been missing since his last trip to Borneo in May 2000.

For further information on the two new species, please contact: