Kuala Lumpur: A blockade to resist a hydroelectric dam in Baram in the Malaysian state of Sarawak marks its 300th days today on Monday 18th August 2014. As an event for the occasion, a group of villagers from around the proposed dam site are in Kuala Lumpur to participate in a forum at the nation capital. The forum was specially organised to launch a report from a human right fact-finding mission done in Baram related to the construction of the Baram dam. At the forum, the delegation from Baram is testifying on the findings of the mission.

There have been so many allegations of widespread human rights abuses committed by Sarawak Energy Bhd (SEB) at the proposed site of the Baram dam. In response to these allegations a study by an independent group was arranged at 15 villages in Baram last February. The finding of the study group was being evaluated with reference to Malaysian and international human right guideline.

Based on the study, the action by SEB and the Sarawak Government to begin preparation for the construction of the Baram Dam violate provisions of the Malaysian Federal Constitution and the UN Declaration on the Rights of Indigenous Peoples. The published report from the study highlighted seven specific categories of none compliance committed by SEB in Baram, which are as follow: (1) Denial of right to information and lack of transparency about the impact of the proposed project, (2) Lack of respect for the principle of free, prior, and informed consent; (3) Violation of the rights to meaningful participation; (4) Extinguishment of customary land rights; (5) Violation of the right to livelihood; (6) Use of coercion against villagers, including the issuing of punitive measures, threats and intimidation; (7) Violations of the rights of indigenous peoples to self-determination. In the report, the facts finding mission gave a set of important recommendations to Sarawak Energy Bhd and the Sarawak Government to be in compliance to national and international requirement.

On the same day, the report was officially handed over to SUHAKAM, the Malaysian Human Right Commission with a request for the body to – “Take immediate measure to launch an independent detailed investigation into the allegation of SEB’s act of corruption and coercion of the villagers in Baram.” The report will also be handed over to institutions that are considering investing in the Sarawak dams.

Peter Kallang, the chairman of SAVE Rivers said, “The people of Baram are appealing for help and may their plea be heard far and wide so that this abusive and bulling act by the government on its people is stopped immediately,” he added, “I am glad that SUHAKAM is willing to listen.” 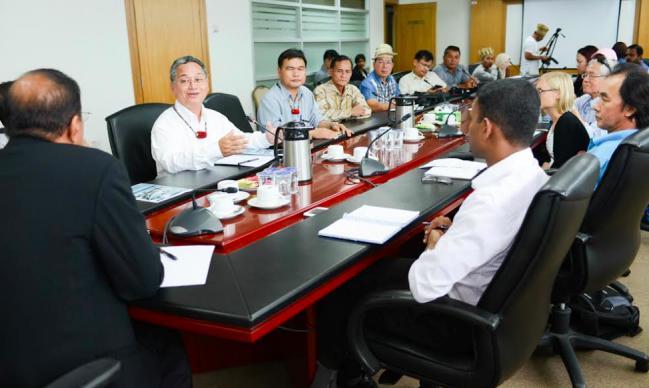 Save Sarawak’s Rivers Network (SAVE Rivers)