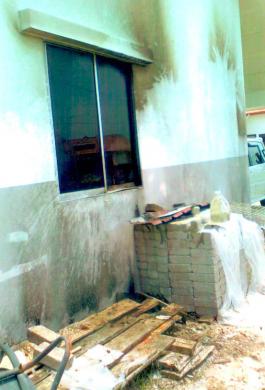 MIRI – On 22 March 2015, at around midnight, a house belonging to Tuai Rumah Jambai Ak Jeli, located at Taman Jelita, Miri was purposely set on fire in a suspected arson which have apparent links to the current Native Customary Rights (NCR) land dispute involving 5 longhouses of the Iban community of Sungai Bekelit, Sungai Serunggut and Sungai Kelitang, Sibuti sub-district, Miri.

This is the second arson case to befall Tuai Rumah Jambai, whereby exactly 3 months earlier, on 22 December 2014, his car was torched by unknown persons right in front of his house. In that incident, the car was a total loss.

Fortunately, this time neighbours were alerted to the fire and managed to put the fire out just in time to save the house. At that particular time, TR Jambai and his family were not in the house as they were at their longhouse at Sungai Bekelit.

A police report was lodged by TR Jambai immediately after he got news of the incident and the next morning he rushed back to his house with police officers to inspect the damage caused by the fire.

Three broken bottles were found at the scene to indicate that this is an act of arson.
According to a neighbour, he was alerted to the sound of broken glass that night as he was about to go to sleep. He went to look out his window to see a fire by the side of TR Jambai’s house and immediately rushed out to alert the other neighbours to put out the fire.

According to TR Jambai, he suspected the two act of arson were committed by the same group of people which he suspected are gangsters employed by the plantation company to intimidate him and his family to relinquish his community’s NCR to the company Tung Huat Pelita Niah Sdn. Bhd. 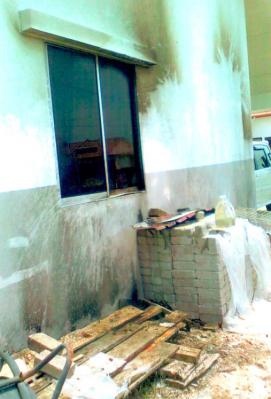 According to witnesses, a white Toyota Vios with tinted windscreens was seen moving around the vicinity of TR Jambai’s house before the fire and immediately accelerated out of the area once the fire started. The same Toyota Vios was also seen at Sungai Bekelit and Tung Huat’s office previously leading to the suspicion of the company’s involvement in the arsons.

Gangsters in the guise of being employed as security firms and Auxiliary Police engaged by the said company have been harassing and intimidating the 5 longhouses in the said area.

The said company was issued a provisional lease (PL) of Lot 2, Block 9, Bukit Kisi Land District for the purpose of an oil palm plantation. The case has already been tried at the Miri High Court last year, but the Miri High Court did not recognise all the land claimed by the 5 longhouses as NCR.

The Miri High Court also did not recognise all the land with the PL of the said company as belonging to the company either. Therefore the status quo still remains and both parties in the suit are appealing the decision made in the Miri High Court.

Previously, on 24 December 2014, the Miri Police Chief ACP Gan Tian Kee led a force of 80 police personnel to Sungai Bekelit to dismantle the blockade erected by the longhouse residents against the said company. ACP Gan himself personally took it upon himself to destroy the ‘piring’ or offerings made by the Ibans to their deities at the blockade site totally disregarding the Iban Adat or customs.

He also proceeded to dismantle their blockade and the huts erected at the site.
BRIMAS condemns this act of violence and intimidation perpetrated by the said company in order to intimidate and force the Iban villagers to surrender their rights so that the company can exploit the land for commercial purposes.

BRIMAS demands that the police and authorities look into this incident seriously as we do not want another bloody incident or loss of life to happen if the authorities do not investigate prompting the Iban villagers to retaliate and take the law into their own hands.