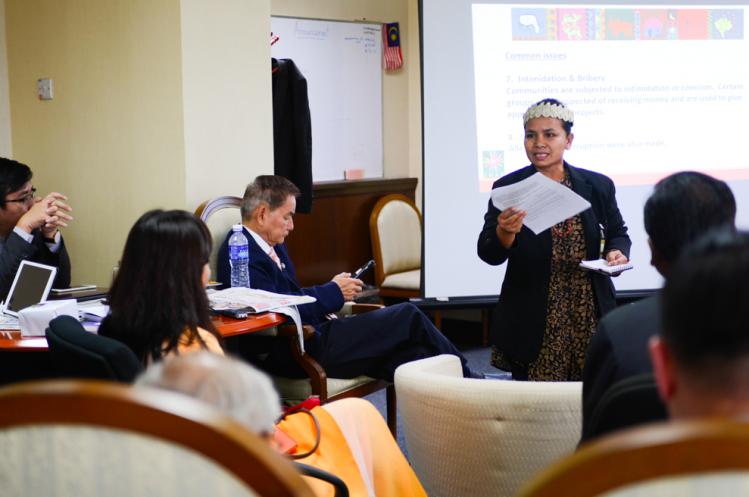 In a parliamentary briefing to twenty members of parliament (MPs) at the Opposition Party Office (DAP) last week on 17 June 2015, the Jaringan Orang Asal SeMalaysia (JOAS) called for the establishment of a Parliamentary Select Committee (PSC) as part of the recommendations following the findings of the Task Force on the SUHAKAM National Land Inquiry (NI) on the Land Rights of the Indigenous Peoples of Malaysia.

JOAS delegates consisting of Orang Asal from Sabah, Sarawak and Peninsular Malaysia,
presented updates from the findings of the SUHAKAM NI report as well as on the issues
surrounding the development of mega dams. “We strongly urge for the formation of a Parliamentary Select Committee (PSC) to monitor the research and drafting/amending relevant legislations and work with the PBN/State Authorities on the Prime Minister’s commitment to resolve land disputes. The PSC can also look into efforts establishing redress mechanisms such as the Native Title Court or Land Tribunal, and
also examine the role of PEMANDU in developing indigenous territories,” explained Jannie Lasimbang, JOAS Secretariat director.

Lasimbang added that the PSC should also look into the drafting of a law and procedures on obtaining the Free, Prior and Informed Consent (FPIC) of the Orang Asal when their land is involved in any development projects. The PSC can also look into the establishment of the National Commission on Indigenous Peoples. “As a national network with experts working with grassroots communities, most of whom are
Orang Asal themselves, we offer our commitment to work with the PSC towards building a nation that upholds its commitment to its indigenous peoples,” Thomas Jalong, JOAS President affirmed.

“While we welcome the Cabinet’s decision to set up a Cabinet Committee following its review of the Task Force recommendations, JOAS and the MPs who were present agreed that a Cabinet Committee may not be transparent. Neither will such committee involve experts and indigenous peoples themselves,” Jalong reiterated.

Among other topics discussed at length, particularly with MPs facing these issues in their
constituency included:

1. Research on Laws and Customary Tenure
JOAS is not satisfied with the timeline for the research into these recommendations as the issues need to be resolved urgently. Furthermore, there are already many court judgements and research done on this matter. The proposed PSC needs to oversee and accelerate the implementation of those recommendations. Orang Asal representatives should be included in the research.

2. The issue of Communal Titles.
JOAS does not support the concept of Geran Komunal practiced in Sabah as it is not based on Native Customary Rights claim. Some MPs raised concerns that the Orang Asal would sell their land should they be given land titles. It was clarified that in the case of the Orang Asli, the Orang Asli Reservation Act land is in place to prevent such occurrences, or at least make it difficult for Orang Asli Reserve land to be
converted and sold. JOAS Secretariat director, Jannie Lasimbang further added that from a Human Rights perspective, Orang Asal should not be deprived of the right to decide what best to do with their land. Many were misled by their own government-appointed Ketua Kampung/JKKK, or forced to sell part of their land to support their children to attend school, for medical expenses, or for other investments. The government should therefore look into these needs and issues of the communities if they want to stop further sale of land.

3. Review of Jabatan Kemajuan Orang Asli (JAKOA)
JOAS supports the recommendation by SUHAKAM for a comprehensive review to be done on JAKOA. Orang Asli representatives present, JOAS vice-president Yusri Ahon and JOAS Women Batin, Fatimah Bah Sin, both stressed that JAKOA has not been serving in the interests of the Orang Asli, and a comprehensive review on JAKOA should be done instead of just doing an administrative review of JAKOA as proposed by the Task Force.

4. Absence of Free, Prior and Informed Consent (FPIC) from Orang Asal in the development
Big or small, the development of dams ultimately encroaches upon Orang Asal land. Social factors are often not considered in the development of mega projects. JOAS President Thomas Jalong explained that mega-dams have been wrongly used as a means to develop rural areas, to give job opportunities or build PPRT houses. This approach is insulting, as it shows that there is no respect for the present way of life of the Orang Asal.
No Free Prior and Informed Consent (FPIC) process is done for dams or other development projects on Orang Asal land and as such, this process must be required by law. Six recommendations from the Task Force were related to obtaining such process as indicated in its support for the Human Rights Based Approach to Development and requirement for Orang Asal participation in decision-making.

The Jaringan Orang Asal SeMalaysia (JOAS) is a national organization of 87 local community organizations in Malaysia and has been engaging with the UN system and other bodies for the promotion of the rights of indigenous peoples.
—————-
Jannie Lasimbang: 0109311944 | [email protected]
Sze Ning: 0126061592 | [email protected]