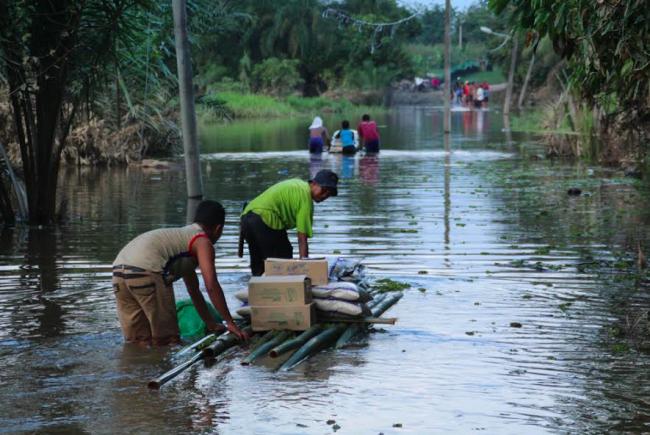 The Jahut communities of Paya Mendoi and Kampung Seboi (Kuala Krau, Pahang) were directly affected by the floods. Funds from the JOAS Flood Relief Fund were transferred to our local contact, Shafie Dris, who together with the villagers organized the purchase and delivery of some supplies on 31st December 2014. (Photo credit: Shafie Dris)

The unprecedented onslaught of rain brought widespread devastation, catching everyone off guard. Not forsaken were the Orang Asli who, already making up for disproportionately high incidences of hardcore poverty in Malaysia, were severely effected as flood water ravaged their subsistence farm plots and cash crops.

“Our members were sending Whatsapp photos of their roads cut off by flood water and even houses underwater. It was like nothing we had ever seen before. Once we recovered from our shock, our team organized a JOAS Flood Relief Fund and before the year end, raised over RM 70,000 in less than a week,” explained Jannie Lasimbang, secretariat director of the Indigenous Peoples Network of Malaysia, JOAS (Jaringan Orang Asal SeMalaysia).

The JOAS Flood Relief Fund account, which is available for public viewing online (http://bit.ly/1xqboFO), details both the donations coming in and how the money was spent. Donations collected from the public amounts to over
RM130,000.00. “At the beginning, much information of the extent of the disaster was not fully known yet. As a national network, we mobilized our JOAS Action Committee Members to gather information from our network members affected by the floods, and compiled and shared it publicly through Google Documents (http://bit.ly/1wxqS75). The document was updated at least 3 times a day in the early days,” Lasimbang added.

The generous donations which came from members of the public, both locally as well as from overseas, were transferred directly to the Orang Asli ground coordinators who made the necessary purchases and delivered these directly to the nearby settlements in need. One of such coordinators were Rahman bin Has and his team from Kampung Cenaweng in the Temenggor Dam area, which itself was affected by the flood. Like most villages on the banks of the Temenggor Dam, his village was only accessible by boat. And with road access cut off to many Orang Asli villages there, if there were any in the first place, travel by boat was the only means of getting to the affected villages. As soon as donations came into the JOAS Flood Relief Fund at the end of December, online transactions were made to Rahman’s account and he was able to purchase the supplies needed in Grik for immediate distribution to the affected villages. Rahman and his team continue to tirelessly coordinate and deliver supplies.

Stories of unsung Orang Asli heroes are not limited to the Grik area, but are also prevalent in Ulu Telom, Jerantut, Gua Musang and Chini. “This was the fastest and most efficient way to get supplies out. Being the Orang Asli coordinators on the ground, they were able to immediately meet the needs of the affected communities, rather than wait for supplies to be delivered from the collection centers, which do not always meet the needs on the ground. For example, not all areas needed clothes as it could only be that their access road was flooded and not their houses,” explained Colin Nicholas, coordinator of the Center for Orang Asli Concerns (COAC). COAC is the coordinating NGO for
the JOAS flood relief effort.

“The Orang Asli have been in a difficult situation even before the floods in late December. The onslaught of the rainy season in early November caused landslides and soil erosion resulting in several Orang Asli communities being cut
off from the towns. Food supplies became scarce especially when the rains destroyed their hillrice and ubi kayu crops. And medical assistance was nonexistent for these communities,” he added.

“The role of NGOs, particularly grassroots NGOs, is more important now than ever to fill a vacuum in the relief efforts. It is evident that the Government cannot cope with the unprecedented scale of devastation,” Nicholas explained. While flood affected Orang Asli in Perak and Pahang has since been reached and have received aid, access roads to many villages in interior of Gua Musang, Kelantan remain cut off and are still in need of more aid.

JOAS together with COAC have been working together with organisations such the Elite 4×4 Search & Rescue SQUAD/Malaysia Elite Disaster Rescue Foundation (MEDRF) who have done an excellent job in repairing crucial roads and bridges, as well as the UNITED SIKHS with whom we have done a total of four days of helicopter delivery of food aid and medical assistance in the interior areas of Kelantan. “There is much more to be done in the second stage. We hope to be able to work with like-minded partners on mid-term and long-term rebuilding efforts,” Nicholas added.