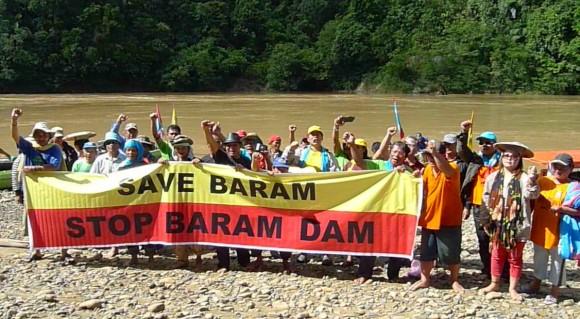 Miri/ 7/5/15 – Enduring 555 days of steamy tropical heat, heavy storms, and mosquitos’ bites including twenty encounters from government authorities and timber companies, the blockaders against the Hydro Electric Power (HEP) Baram-1 have been resolute in maintaining their resistance.

The two blockades have been continuously monitored in the people’s struggle against the proposed mega dam. Villagers from various Baram settlements have been taking turns in looking after the blockade. Today, 7th May 2015. is the 555th day since the blockade was launched.

The blockades were both setup on the 23rd of October 2013 stopping the preparatory works for the proposed HEP dam, Baram 1.  The first blockade is at Long Lama which is 142 Km from Miri while the second blockade is about 60 Km further to the interior from Long Lama. At the launching, there were 300 villagers from the surrounding areas in Baram who were at the two blockade sites on on the first day. Both blockades have been continuously manned since the start by villagers who are taking turn with the responsibility.

Baram 1 HEP dam is one of the three dams which are planned to be built on the Baram River,  the second longest river in Sarawak. If the proposal for Baram 1 HEP dam is successfully implemented, it will inundate 400 sq km of land which include forest, farmstead, villages, historical sites, thousands of plants and animal species. There will be between at least 26  villages which would be inundated and around 20,000 people to be resettled.

While quietly celebrating their success in thwarting the construction of the proposed 1200 MW Baram 1 dam, it is obvious that the villagers are as determine as ever in their objection to the project. Commenting on the blockade, Johannes Luwat from Long San said, “We are at the blockade to protect what is ours. We have every right to do that. So we will maintain the blockade as long as it takes.”

The chairman of SAVE Rivers, Mr. Peter Kallang,  “commended the assertiveness shown by the villagers in protecting their heritage and human rights.” He said that, “SAVE Rivers will continue to its role in supporting the people to stop the proposed dam. We are aware that the dam’s proponents are employing various tricks to make the people accept the proposed dams.”