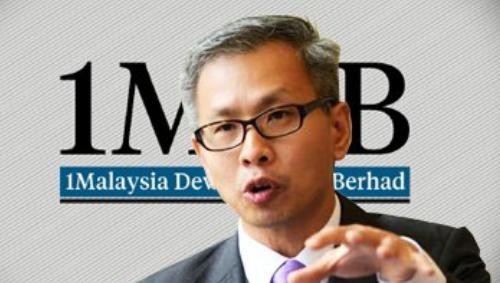 As the Prime Minister chickened out of his own 1MDB “Nothing to Hide” forum, the Minister of Finance II Dato’ Seri Ahmad Husni Hanadzlah told tall tales on live television

Dato’ Seri Najib Razak must be panicking and scampering around like Chicken Little who believed that “the sky is falling” on him. Not only did he have to make flimsy excuses to justify weaselling out of a “Nothing to Hide” Forum choreograph to make him look good, his Second Finance Minister was caught red-handed telling tall tales about 1MDB on live television.

In fact, Dato’ Seri Ahmad Husni Hanadzlah told at least 3 mighty tall tales on the RTM1 Dialogue “1MDB: Where Did the Money Go?” in a vain attempt to convince the audience that all is well at the wholly owned subsidiary of the Ministry of Finance.

Firstly, when the host raised the question I tweeted, with regards to the US$1.2 billion paid by 1MDB to Good Star Limited using the pretext of a loan to Petrosaudi International Limited, Dato’ Seri Ahmad Husni deflected it by claiming that the media only claimed US$700 million and the opposition is always lying.

He then tried to cover up even the US$700 million siphoned to Jho Low’s company, by claiming that 1MDB has gotten back all the money from Petrosaudi International and even made a tidy profit of US$488 million. Hence the issue of money being siphoned, and Jho Low’s involvement is immaterial or does not arise.

Dato’ Seri Ahmad Husni was obviously attempting making light of a very grave matter. Otherwise, how could a Finance Minister not know that the allegations that Jho Low’s company siphoned US$1.2 billion has been published not only in blogs and major news portals, but also the leading financial papers like The Edge[i]. While US$700 million was transferred to Good Star directly in 2009, another US$160 million and US$330 million was transferred in the 2010 and 2011 financial years respectively, totally US$1.2 billion.

What’s more, the so-called “profit” is a lie because the alleged US$1.1 billion (which includes the US$488 million profit) sitting in BSI Bank Singapore isn’t cash but in units of assets of indeterminate value.

Secondly, the Second Finance Minister made a complete fool of himself by claiming that it is a normal practice for Auditors to be changed or “rotated” every 3 years. While that might possibly explain why KPMG was replaced with Deloitte in 2013, it didn’t at all explain why Ernst & Young quit even before it signed its first accounts in 2010!

However more pertinently, the above argument by Dato’ Seri Husni is a complete piece of fiction because there is no such principle for auditor rotation every 3 years. No other Ministry of Finance owned or Government-linked companies ever rotated their Auditors with any regularity.

While the makcik and pakciks watching the live screening at home may be swayed by his bullshit, the Minister has single-handedly destroyed the credibility of his office in the local and international financial community. Bankers and investors alike must think that Malaysia has an idiot as a Finance Minister.

However, the tallest of the tall tales told by Dato’ Seri Husni must be when he claimed that Syarikat Prasarana Bhd, a completely unrelated Finance Ministry subsidiary, won a RM215 million bid to operate and maintain a Metro line in Saudi Arabia in May 2015 through the efforts of 1MDB. This was allegedly a result of 1MDB’s joint venture with Petrosaudi International in 2009. What the Minister didn’t say was that the joint venture was already disbanded in March 2010, long before Prasarana’s bid into secure the project.

The Second Finance Minister was caught with his pants down when The Sun Daily reported[ii] that Dato’ Shahril Mokhtar tweeted “As a former CEO of Prasarana I started d venture into Saudi Arabia and it has got nothing to do w PetroSaudi.” The tweet has since been deleted but the damage is already done – Dato’ Seri Ahmad Husni’s erstwhile relatively trustworthy reputation has been blown to smithereens.

The failure of the Second Finance Minister to explain truthfully to the Malaysian public, coupled with the Prime Minister’s disgraceful no show at the “Nothing To Hide” forum staged just for him, have proven that it is impossible to cover up the RM42 billion 1MDB scandal. Both Dato’ Seri Najib Razak and Dato’ Seri Ahmad Husni Hanadzlah have now got no other choice but to resign disgracefully from the Cabinet.