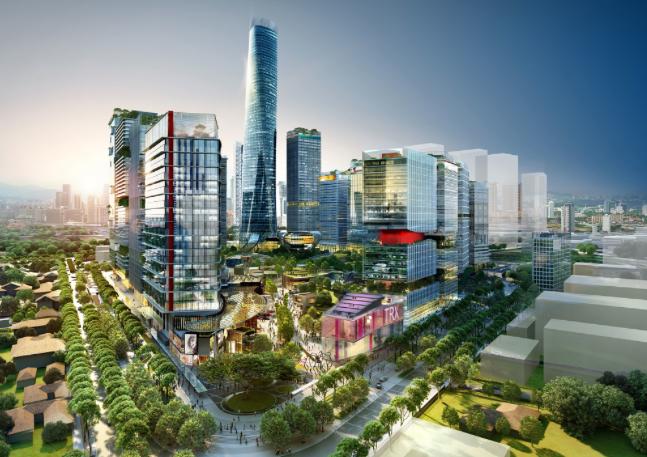 While there were many other oft-repeated excuses to explain the “missing funds” and his refusal to entertain questions with regards to the enigmatic Jho Low were widely publicised in news reports, what stunned me was Dato’ Seri Ahmad Husni’s revised valuation of 1MDB’s real estate properties.

As he rattled off the list of highly valued assets in 1MDB’s possession, he explained that the 70-acre Tun Razak Exchange (TRX) and 495-acre Bandar Malaysia are now worth RM7 billion and RM11 billion respectively.  He argued that their combined value of RM18 billion will go a long way to proving that 1MDB will comfortably pay off its monster debts over the longer term.

These revised valuations are shockers because even the previously revised valuations presented in the 31 March 2014 financial statements are only worth a fraction of the newly disclosed figures.  The Tun Razak Exchange land belonging to KLIFD Sdn Bhd was already then revalued to RM2.7 billion.  Similarly, the Sg Besi military airbase land sold to Bandar Malaysia Sdn Bhd was then revalued to RM4.29 billion. These numbers add up to barely RM7 billion.

The question hence is how did the valuations of these pieces of properties leap by 157% in just one year?

Worse, these properties were purchased from the Malaysian Government at only RM194 million and RM1.69 billion back in 2011 and 2012 respectively.  In less than 5 years, 1MDB gets to “profit” nearly 900% despite having done almost nothing on these pieces of prime land over the last few years.

We want to know if the 2nd Minister of Finance was spewing gibberish and just plucked these new outlandish valuations out of thin air to present an optimistic picture of 1MDB.  How were these new valuations arrived at? Or are there more sinister reasons why the values have been massively inflated?

I had written earlier on 31 May 2015, in response to Dato’ Seri Ahmad Husni’s earlier statement that the TRX and Bandar Malaysia will be made separate “independent” entities owned by the Ministry of Finance.  I had expressed my concern that the Minister’s statement meant that the Federal Government will essentially acquire KLIFD and Bandar Malaysia from 1MDB at very high prices.

Based on March 2014 accounts, I had already warned that if the Government pays asset prices of RM7 billion and still relieve 1MDB of their associated loans of RM3.2 billion, then Malaysians will be forking out a total of RM10.2 billion just for these transactions alone.

However, based on the latest bombshell from the Second Finance Minister, the Government would now have to fork out a whopping RM18 billion, or as much as RM21.2 billion if KLIFD and Bandar Malaysia’s associated loans are taken into consideration.

Is this the real, devious and deceptive scheme the Ministry of Finance is planning to cover up the massive multi-billion ringgit losses and missing money in 1MDB while keeping the pretence that everything is above board?  If so, it is certainly nothing short of daylight robbery of the tax-payers’ monies.

Dato’ Seri Ahmad Husni must provide a detailed explanation on the above and not evade it like he did the Jho Low poser. This isn’t some alleged tabloid speculation.  These bits of information came from the Minister himself and it would be the ultimate act of irresponsibility for him to refuse response to the above questions.