Awang Tenga (who is also Second Minister of Urban Development and Natural Resources) reminded NCR landowners not to be greedy when asking for their land to be surveyed.

“Please, do not make false claims over the boundaries just because you wanted to have a bigger size of land when the perimeter surveyed carried out”(sic)

“If the proof of land is authentic, the authority will have not problem to approve but sometimes, there are some people who are greedy and want their land to be surveyed beyond the original boundary”, he pointed out. 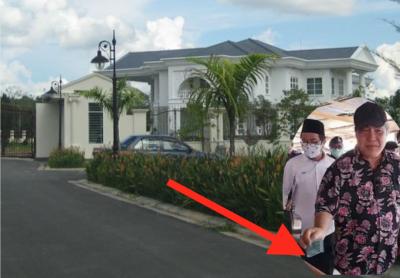 Pot bellied Awang Tengah is famous in Sarawak as the personification of personal greed and kleptocratic politics.

No one need be in doubt as to how his political position has acquired him great wealth (despite years on a modest ministerial salary which precludes him dealing in business or indulging in conflicts of interest). After all, he boasts one of the largest houses in Kuching.

Tengah has been caught on camera walking through the market place handing out RM50 note bribes to stall holders and he has been the subject of a massive legal action accusing him of  conspiracy to defraud over RM285 million which he has yet to settle.

He is notorious in one of the most notoriously corrupt regimes in the world, so for him to dare accuse the impoverished native people he has cheated of being greedy as they fight for the recognition of their lands is beneath contempt.

For years his government has raped the resources of their lands in the name of modernisation, progress and development and left the Dayak amongst the poorest and most backward people on the planet, despite the vast natural wealth of the lands wrested from their control.

As their lives have become harder with their lands stripped bare around them and their waters polluted, Awang and his pals have got fatter and richer…. and richer. Make your conclusions as to who has the right to lecture others on greed.