The High Court here has granted a bid by former intelligence chief Hasanah Ab Hamid for a full acquittal in her RM50 million criminal breach of trust (CBT) case.

In April last year, the High Court granted a discharge not amounting to acquittal (DNAA) against Hasanah over the case.

Today, judicial commissioner Roz Mawar Rozain allowed Hasanah’s application to vary the court order from a DNAA to a full acquittal after the prosecution, represented by deputy public prosecutor Fairuz Johari, did not raise any objection. 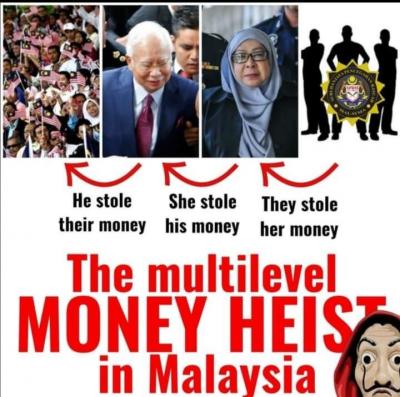 Once again the coup coalition’s tame Attorney General has let off yet another insider from the criminal BN government (of which the present coup government is a re-configuration).

The Lady Spy Chief had nabbed some of Najib’s stolen money and was due for trial and punishment. Except the Lady Spy Chief was not only one of the boys (so to speak) but also knows where many more crimes were committed and where they are buried. That was the nature of her charming occupation.

At first she was let off prosecution, like Najib’s son Riza, under terms that let her off but did not acquit her of the wrongdoing.

Now she has argued even over that, demanding that the record of her wrongdoing be removed. For reasons one can divine the tame AG has decided not to argue and so she has won her spurious argument by default.

Once again, politics trumps the law in Malaysia and the super-criminal Najib is determined that he too will benefit from this practice.