"Something Wrong?" You Bet! 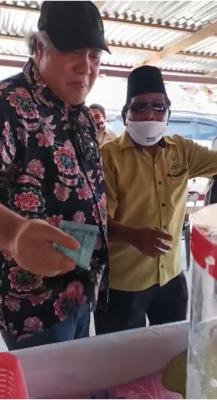 An Umno leader has mooted that financial allocations for elected representatives are better channelled to government agencies that serve the rakyat.

Umno information chief Shahril Hamdan told an online forum that the country already has a system in place for which the rakyat can tap for assistance. Elected representatives should instead be playing the role of facilitating this process rather than giving out cash to polish their political image, he stressed.

“Why do we rely on elected representatives to solve welfare issues? Is it not the task of existing agencies in the first place? Like the Welfare Department for example? ”

Surely there is something fundamentally broken. If I am an elected representative…. “I can give out food baskets and some cash aid. Meaning that if I have money, then I am more likely to succeed (as a politician). Surely there’s something wrong,” he said.

It is refreshing to hear a young UMNO leader reflecting on the corrupt practices that formed the bedrock of the system his own party has operated by looting public money to promote its prospects over very many years.

He is entirely right. The stomach churning scenes that have just gone viral in Sarawak of the local thug politician Awang Tengah swaggering through the market place handing out RM50 notes to hardworking constituents (as if the cash was his) is the perfect illustration of the sick system at work.

Awang Tengah became rich through public office. He hands out cash he gained through his access to public funds over which he and his party owe a duty of trust. For such politicians to raid the public coffers to hand out cash in such a manner to buy gratitude and votes – and further to deny the same sums to opposition parliamentarians is corrupt practice.

People must understand the money is theirs in the first place, not his kind personal gift to them. Likewise the fat constituency grants, the distributions of bags of rice with minister’s faces printed and all of the rest of the state-funded handouts channelled through elected MPs instead of state agencies as they should be.

All state funded benefits should be carefully shared out according to clear public policy by neutral public bodies to those identified as the most deserving by the elected government. The elected representatives can claim credit for the policies but should never directly touch a single ringgit to buy favour … let alone be seen tossing it (as if to beggars) at the folk they took it from in taxes and state assets in the first place!

Maybe, by championing such reforms the upcoming generation of UMNO will recommend themselves as better servants of their people than the dirty predecessors who tarnished the name of government in Malaysia?

This particular call for change should be implemented immediately.