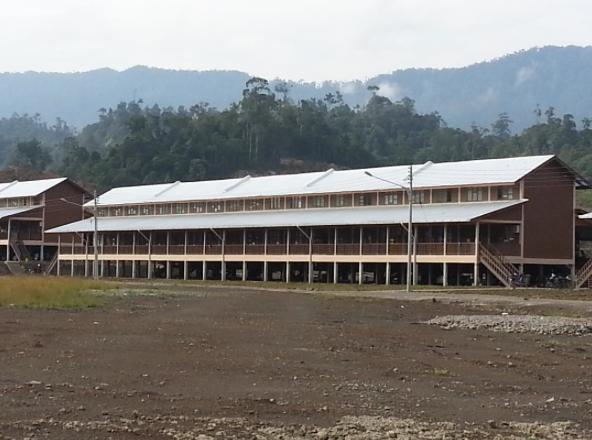 The Bar Council, through its Committee on Orang Asli Rights and Human Rights Committee, undertook a study trip to the Metalun and Tegulang Resettlement Areas in Murum, Sarawak from 17 to 23 May 2014. The primary purpose of the trip was to study the post-relocation conditions of the Penan and Kenyah native communities, which had been displaced by the construction of the Murum Dam.

At the Universal Periodic Review of human rights in Malaysia conducted by the United Nations Human Rights Council in October 2013, the Government of Malaysia made several statements in respect of the communities relocated as a result of the Murum Dam construction.1 However, it is regrettable that the situation on the ground differs significantly from the seemingly positive statements made by the Government. For example:

(a) The promised land allocation of 15 hectares has yet to materialise. The Penan and Kenyah communities are unable to begin meaningful agricultural activity because of this uncertainty. Since most of the surrounding land is under the control of palm oil plantation companies, it is difficult to see how sufficient banks of land near to the resettlement areas could be found;

(b) The Penan and Kenyah communities are being deprived of the provision in full of the promised monthly food supplies of RM600 per month per household. No genuine attempt has been made to explain the shortfall, nor has the shortfall been rectified;

(c) The housing prepared for the Penan and Kenyah communities has been constructed out of poor quality materials and with poor workmanship. Cracks and other damage are already apparent after a mere six to eight months;

(d) Promises of adequate furnishing of the houses in the Resettlement Areas have not been fulfilled;

(e) Promises of diesel subsidies to help children commute to school have not been kept. Consequently, some children have to make their way to school in small perahu via the river, which is dangerous, especially when there is heavy rain;

(f) Ironically, despite having been relocated for the purposes of constructing the Murum Dam, which will provide hydroelectric power to the state of Sarawak, the community in Tegulang Resettlement Area receives 12 hours of electricity per day via a diesel-powered generator set. The Metalun Resettlement Area community receives only six hours of electricity per day via the same method; and

(g) Job opportunities for the Penans and Kenyahs in or around the Resettlement Areas are scarce or non-existent. Most of the surrounding timber and palm oil companies hire foreign labour.

In short, rather than experiencing “an immediate and substantial improvement in living standards, better access to basic human rights to education and health care, and better economic opportunities, whilst preserving their cultural identities and traditions”, the affected communities have been displaced and left desolate. Their living conditions are deplorable and their livelihood has been decimated. In spite of this, there appears to be no sense of urgency in remedying or rectifying the situation. The standard response when officials from Sarawak Energy Berhad visit the area is one of indifference or callousness. The Penan and Kenyah communities are simply told that they would have to refer the matter to the “pegawai atasan” in Miri or Bintulu, which is 12 to 16 hours away by road.

This shameful state of affairs exemplifies the broader challenges faced by Malaysian indigenous minorities in protecting their rights and fundamental liberties as indigenous peoples. In Peninsular Malaysia, there has been no effective legislative or executive action to recognise the customary rights of Orang Asli to their lands, resources and territories despite there being more than a decade of judicial pronouncements by the Malaysian superior courts legally recognising these rights. Moreover, Federal and State Governments persistently attempt to contest, reverse or ignore binding precedent and jurisprudence laid down in landmark Orang Asli cases such asAdong bin Kuwau v Kerajaan Negeri Johor and Sagong bin Tasi v Kerajaan Negeri Selangor. The laudatory and humane principles established in these cases are, time and again, more honoured in the breach than in the observance.

A disturbing recent development is the Malaysian Government’s lack of support for recommendations, made during Malaysia’s 2013 Universal Periodic Review, for it to implement the principles contained in UNDRIP. This contains express provisions calling for the recognition of the rights of indigenous peoples to their lands, territories and resources and the free, prior and informed consent of indigenous communities in matters affecting indigenous lands, rights and resources. Earlier in 2006 and 2007, the Malaysian Government had unreservedly voted for UNDRIP, proclaiming the Declaration “as a standard of achievement to be pursued in a spirit of partnership and mutual respect”. It is inexplicable that the Malaysian Government appears to have reneged on its UNDRIP pledge to the international community, and perhaps more importantly, to its indigenous minority citizenry.

As we commemorate International Day of the World’s Indigenous Peoples on 9 August 2014, the Malaysian Bar strongly urges the Malaysian Government to immediately honour its commitment to implement UNDRIP domestically, and to give full effect to the Malaysian courts’ recognition of the customary land and resource rights of indigenous minorities.

The Malaysian Bar also calls upon the Sarawak Government and its agency, Sarawak Energy Berhad, to immediately address the situation at hand. They have had many years to prepare for the resettlement during the period of the construction of the Murum Dam, and yet most of the infrastructure provided to the Penan and Kenyah communities seem to have been hurried and last-minute, with many issues remaining unresolved and many promises still unfulfilled. The life that they have been forced to accept is clearly not sustainable, is unacceptable by any decent standards, and will in the long term lead to a culture of continued dependency on the government. Genuine regard must be shown for the well-being of the affected Penan and Kenyah communities.

Indeed, the inalienable right of all our indigenous peoples to free, prior and informed choice as to their future and their way of life, must be genuinely recognised and respected.

The current development agenda, involving the building of hydroelectric facilities, necessitated the use of NCR [native customary rights] land. Where rights to NCR land were affected, the State Government and its utility company, Sarawak Energy Berhad: (a) adopted best international practices in engagement and consultation with indigenous peoples, which conformed with acceptable norms and standards, including principles embodied in the United Nations Declaration on the Rights of Indigenous Peoples; and (b) provided affected indigenous communities with a comprehensive compensation package, which assured them an immediate and substantial improvement in living standards, better access to basic human rights to education and health care, and better economic opportunities, whilst preserving their cultural identities and traditions.

Implementation of the resettlement action plan and compensation package for those affected by the Murum Hydro-electric Project exemplified a process that recognized the rights and well-being of the indigenous people.

In recognizing the challenges facing indigenous communities in Malaysia, the Government maintained that those communities must be afforded choice and be free to decide whether they wished to join mainstream society or not.