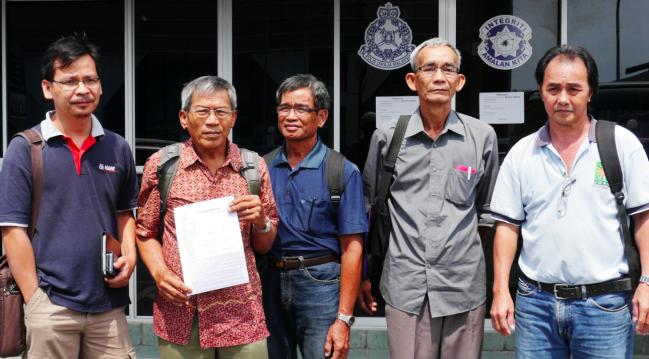 Miri – Land owners from Long Keseh and Na’ah submitted an official complaint to the Malaysian Anti-Corruption Commission (MACC) and made a police report on the illegal logging activities which are carried out on the access road and site of the proposed Baram dam.  The basis of their claim is that the documents for the timber licence shows that it was one of the preparatory works for the proposed Baram dam. All the affected lands are Native Customary Right lands within the boundaries of the two villages. The complaints were made against the logging companies M.M. Golden Sdn. Bhd./or Autorich Sd. Bhd., the Forestry Department, Sarawak’s Ministry of Resource Planning and Environment and Sarawak’s Ministry of Natural Resources.

In connection with the on-going blockade to resist the proposed Baram dam, a letter from the Director of Forest, Sarawak, address simply “To whom it may concern” was received on 25th July by those manning the blockade at Km15, Long Keseh, Baram. It was a notice for the blockade to be dismantled within 14 days of the 21st July 2014. The reason given was that the blockade is “in contravention” with the Forest ordinance.  Commenting on the instruction on the letter, Mr. Jok Eng from Long Keseh said, “Our rights to that NCR land was established long before the issuance of the timber licence to the logging company and it is still valid until today; as handed down to us by our ancestors. So our blockade to stop any intrusion is our prerogative and responsibility. We are not doing anything which is illegal.”

Philip Jau, the Chairman of the Baram Protection Action Committee commented, “Logging as done by the said company and the construction of access road to the proposed dam site is a prescribe activity for which an Environmental Impact Assessment Study (EIA) must be carried out. Once done, the EIA should be displayed for public comments or in-put. Only after that can it be endorsed by the Natural Resources and Environment Board (NREB). That requirement has been left out and this is just one of their failures here,” he said.